This has been a banner year for Kpop concerts in Texas and that means lots of miles added to our odometers. Here in Texas we tend to measure distances in hours, and fortunately Houston is only about a 3 hour drive from where I live, that is with no stops and good traffic conditions. Dallas is about 5 1/2 to 6 hours. For those out in west Texas the drive can be over 12 hours of driving to get to the usual venues. I mention this to  show the dedication of Texas Kpop fans.

KARD chose Houston and a venue, Stereo Live, that I hadn’t been to before. I got there early to get in line to ensure a good spot once the doors opened. They had paid parking at the venue and staff had put out clear signs showing where fans should start lining up, for which I say thank you. (I hate the general chaos that happens at some concert venues.) I heard that the first people in line got there around daybreak and had settled in early for the long wait. My friends and I were relatively close to the front, and if you check the top photo you can just see me front row left when the show began. The hot Texas sun drove fans into puddles of shade as the temperatures rose. The staff/venue brought out a water cooler which was nice of them. Others sought out the local corner gas station for drinks, snacks and restroom breaks. The staff at the gas station were really kind letting so many people use their restroom. 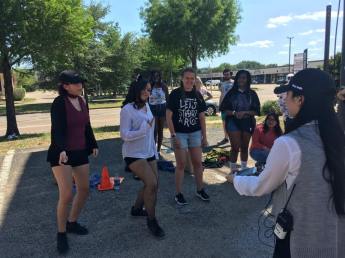 It wasn’t too long before the line circled the building. P1 was to the left and P2 to the right and they met up at the back of the building. While waiting in line some fans were chosen to be recorded for an official film at the end of the tour. Can’t wait to see if my friends make it to the final edit.

Stereo Live is not  a very large venue, which was nice as it had a good intimate vibe going on. It also had a pretty fantastic balcony level allowing a great view for many fans. Once inside the crowd was almost humming with excitement, and sang along to the music, cheered and ‘wo-wooed’. There was a small flurry of excitement as people realized JRE, an internet celebrity of sorts, was seen front and center of the audience, but most people were watching the time waiting for the real reason they were there, to see KARD.

Made up of B.M, Somin, J.Seph, and Jiwoo, KARD is unusual in Kpop for being a co-ed group, which perhaps has made them somewhat more popular with foreign fans than with those in S. Korea. Without ‘officially’ debuting yet, KARD has only released 3 songs, therefore the concert was billed more as a fan meet/ party/concert, so the more intimate setting was perfect. It was also sold out which is pretty fantastic. 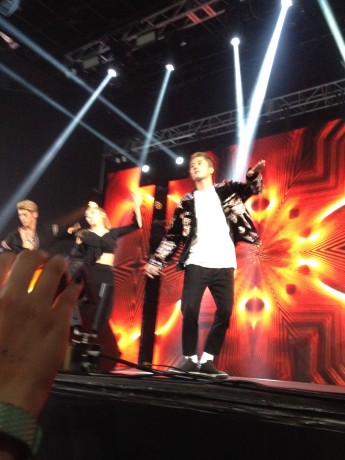 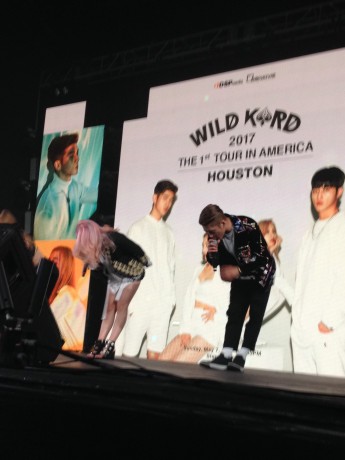 They arrived on stage to raucous screams of excitement and immediately began performing Rumor, after which they paused for introductions. I could hardly hear at this point as the audience never seemed to pause in their show of affection towards the members. You can watch some really good fancams from my friend if you want to watch all the action.

I might be a bad reviewer because rather than list the songs they sang etc, I’d prefer to recount some of the highlights and things that stood out, or particularly caught my attention. I obviously had listened to KARD and watched their MVs but I went to the concert with a fairly open mind, and came away a fan. I had a opportunity to talk to their local driver, and he told me all about how they were very nice, even signing a poster for him and chatting with him. He said they were surprised and thrilled to see so many fans already lined up  when they stopped by the venue for rehearsal.

On stage they all seemed to genuinely care for each other and to help each other out. They also seemed to get comfortably mad at each other in the way only friends can get away with. And after the concert you can see J.Steph sticking close to Jiwoo, guarding her back. They came across as genuine people which is always nice to see. 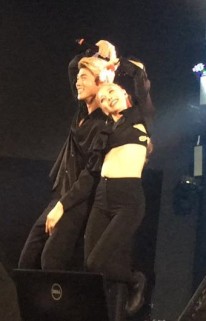 Their singing was good, their choreography on point and after some initial woodenness when they first appeared on stage they relaxed and seemed to enjoy themselves. I love watching performers who are enjoying themselves. Performing shouldn’t be just a job, it should be something you love to do, and KARD looked like they were having a good time. 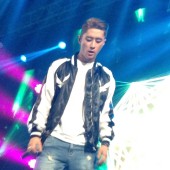 With no particular bias walking into the concert I walked out a J.Seph fan. He somehow reminded me of some kind of small woodland animal, all cute and innocent at times and then at other times all fierce and wild. He was obviously a little at a loss during the parts when English was being spoken, but you could see the spark in his eyes when he understood. It was fascinating to watch him, plus he had a cute smile.

One of my favorite parts of the whole evening was the game section. They chose a great game, one which provided fan interaction without the risk of anyone getting, or feeling, embarrassed. It was maybe more like a lottery for prizes than a game for the 4 randomly selected fans. We all wished we were the ones chosen, but I think we were all genuinely happy to watch brother and sister fans have some of the best moments of their lives. Each ‘contestant’ had to roll a giant dice and depending on the number they rolled they received a ‘gift’. The first winner had BM sing to her for a wake up call message on her phone. Another received a signed poster with a hug, a third got a signed album, and the last one was an instant polaroid photo with all the members.

The fan meet/party/concert was a load of fun and well executed, especially for a pre debut group who have so very few songs under their belts. But evening didn’t end there. Many fans had hi tough or photo ops with KARD and we all had to line up for our benefit. The line for the photo op was fairly well organized, but as usual the photo op was rushed and some of the staff quite curt. Once outside lots of people formed small groups, not wanting the evening to end. Some stayed to watch KARD leave while others spread throughout the city seeking Korean restaurants, the favored place to hang out with like minded KARD fans and go over all the highlights of the evening.

Criticisms include the backdrop display. It was odd watching the real live KARD walking around in front of the giant pictures of themselves on the screen. A more neutral background would have been preferable, especially for those taking photos. Also to those P4 fans who pushed and wiggled their way to the front. No the rest of us who paid for P1 or P2 don’t think you’re clever or smart, we think you’re cheats, taking what you didn’t pay for. And finally kudos to the mom who brought a group of younger girls to the concert. It looked like they had the best night of their lives.

Overall a great night was had by all, and we hope that KARD had an equally fun night. Y’all come back y’hear.

You may also like Party Baby! BAP 2017 World Tour in Dallas,   SHINee World Tour In Dallas,  SXSW Kpop Night  Out,  and Hyuna Charms Her Dallas Fans.

All photo credits to original owners. Thank you to my friend ‘sangheili19’ and Simon Chan for letting me use some of their photos. Remember to check out some of the fancams.