Posted on November 17, 2017 by kpopjacketlady

One of the many reasons to consider a trip to Korea in the Fall is the annual Busan One Asia Festival which is a large multi-day, multi-themed event with different activities all around the city. For Kpop fans it allows quite a few opportunities to catch a glimpse of their favorite groups. We knew ours was going to be a quick one day trip to catch the opening concert, but another time I hope to be able to spend a few days in Busan exploring all the festival has to offer. We managed to get ‘foreigner only’ tickets through Trazy, but I suggest you try another tour group as we were not very happy with their, shall we say, organizational abilities.

The tour bus dropped us off at the end of a very long line of buses and we took this photo on our 20 minute walk down to the line for our particular section. The venue had tried to separate the lines into the difference sections of the arena to make it easier to let people in once the doors opened. Many people had been waiting in line for hours before we arrived, but since we had seats we weren’t too concerned. There were fans from lots of different places around the world in our ‘foreigner’ line which was kinda cool. Since we still had a few hours before they would let us in we chatted and got to know each other. My jacket received some love as people tried to spot their favorite groups.

It was very windy to the extent that some of the metal barriers were blown over and the food truck pop up roofs were bouncing around like crazy. Dust and grit was kicked up and we all soon learned to stand with our backs facing the wind. We were on the edges of the outer bands from typhoon Lan and were lucky we only got the strong winds. 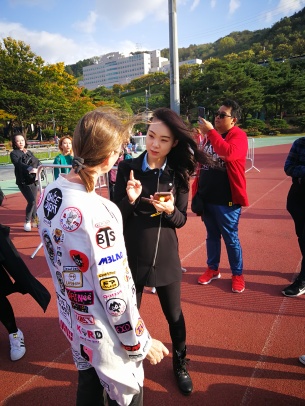 I was interviewed by someone from the concert organizers which was cool, although the wind made that a little tricky too.

The really long lines were for the standing room areas near the stage and there were a lot of fans in those lines. When it came time to let the lines in, the line next to us was just in chaos, it was the first time I’ve ever seen anyone get pushed to the ground and trampled on. It was quite horrifying. Fortunately security acted really quickly and one older guy in particular waded in and saved the day. After that they made everyone walk in like schoolchildren in lines with a concert staffer in front and back of smaller lines of people. Between that and the bag search at the entry it took them a very long time to get everyone inside. Some people were still coming in as the concert started. 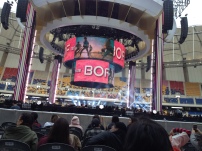 We got inside in plenty of time and were pleasantly surprised to find we had decent seats. We were also on the side with the main cameras which meant that a lot of the ‘action’ would be facing us, and we wouldn’t just be seeing the back of idols.

To help keep us happy before the main concert started we were able to watch a band who were really rather good as well as a female singer.

I think they also used these performers for soundcheck and camera practice which was smart of them.

As night began to fall the temperature also fell to the point that it was downright cold. The wind, although somewhat less within the stadium still swirled around and played havoc with everyone’s hair and outfits. The Busan Asiad Main Stadium is large, seating over 50,000, but even though they said that it was sold out there were still large areas of empty seats. We did notice that one large area of seats was reserved for military personnel in uniform which I thought was nice thought. 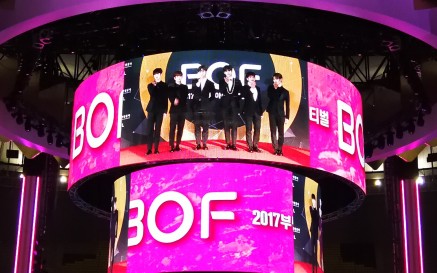 After quite a bit of shouting by staff at one particular area of fans the main event began with the big round screen in the middle introducing the hosts and groups on the red carpet. (We had seen the red carpet in the distance as we waited in line, but when a few people from our group went to try and get closer they were shooed away.)

The main host for the evening was actor Nam Goong Min who looked very dapper in a white suit. There were also presenters and guest speakers who spoke occasionally throughout the show, but that was to be expected as it was the Opening Ceremony concert for the festival. Unfortunately the longer we waited the colder we got. Some people were smart and had brought blankets, which I’ll probably do in future.

And then we heard the crowd over to the left of us, and there they were. All the groups were lined up to walk onto the center stage.

The whole stadium started cheering, it was quite incredible, and suddenly I wasn’t quite so cold any more. 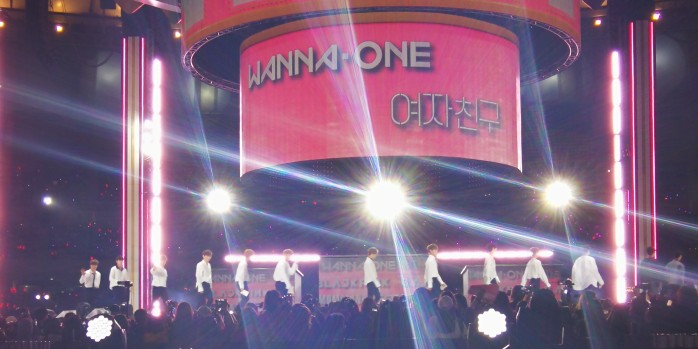 They formed two lines with one group circling left around the stage and the other came right, and right in front of us.

There were loud cheers as fans spotted their favorites walk on stage.

We could see Wanna One, Nu’est W, Black Pink, BAP, and Momoland. We couldn’t make out who were after them though. It was nice to be able to see so many idols in one place.

After a little while of waving and making hearts at us the artists all left the stage and the excitement rose once again as we waited to see who would appear first.

You may also like Taeyang White Night Concert In Dallas,    MonstaX Beautiful In The USA, and Wild Kard 2017: The First Tour In America.

Please do not copy or use without permission and accreditation. All photo credits to Elizabeth and Debora Marzec.