Posted on November 14, 2017 by kpopjacketlady

Gwangmyeong Traditional Market is probably the most famous of Gyeongg-do’s three major traditional markets and a great place to explore if you’re ever in the area. It is the 7th largest traditional market in Korea with over 400 shops and stalls. We had already visited Gwangmyeong Cave and Chunghyeon Museum earlier in the day and were looking for somewhere interesting to eat.

We walked down narrow streets overflowing with interesting shops and restaurants, but pushed on towards our goal. 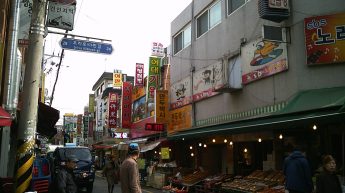 Ken had heard of a place in the market itself that had been mentioned by the TV show, ‘The Nation’s Big Three’ which asked locals to recommend the best places to eat in their areas.

When we found it, it had the cooking area facing the market so you could see and smell what was cooking and 3 tables squished in a tiny area in the back. A few locals were already there and then a large group of male hikers came in soon after us so the place was packed. We were the only females and the only caucasians so people were a little interested in our food and drink choices, and how well we could use chopsticks.

They even had a laugh when they realized we were drinking makgeolli, but they were drinking it too and a lot more than us so the tiny place was soon full of noise and laughter.

Our ‘pancakes’ were cooked fresh for us, with the seafood one being ready first followed by the potato one. (As you can see these are not like American pancakes, but that is the easiest way to describe Jeon.) Both looked amazing and were very tasty. They were served with onion pickles and kimchi which both added a little kick. Two pancakes were more than enough for the three of us and we left full and happy. 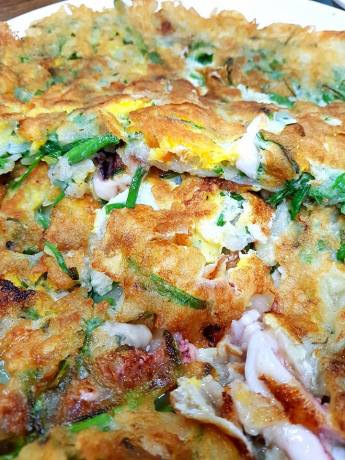 Each place we went Ken made sure to order us a locally made drink, whether that was beer, wine, soju or makgeolli, which meant that by the end of our trip we had tried quite a few regional types of makgeolli all of which were quite different. As soon as I can find a local shop with more than a couple of choices I plan to explore more varieties of makgeolli to see if I can decide on a favorite.

If I understood correctly the restaurant has been in business for about 35 years and is well known in the area. ‘Grandmother’ began it but it was her son in charge the day we were there. 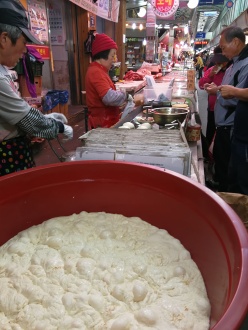 Full as we were I couldn’t resist the Hotteok a stall a little bit further down the way was making. One of my favorite desserts/snacks I try it pretty much everywhere we go. It was hot and delicious. 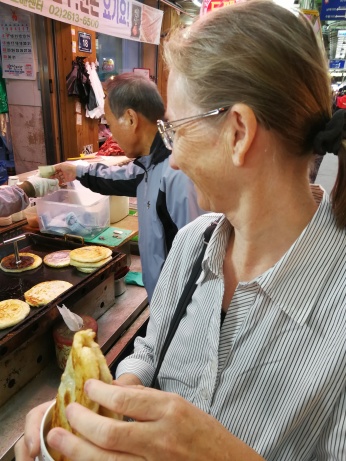 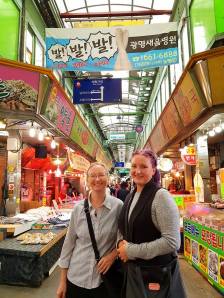 You may also enjoy Foodie’s Delight:The Street Food Of Korea,   Korean Salt,  and Rice: Feeding Half The World Everyday.

Please do not copy or use without permission and accreditation. Photo credits to original owners Kenneth Kim, Elizabeth Marzec and Debora Marzec.