Posted on November 11, 2017 by kpopjacketlady

Jeong-dong is neighborhood in the heart of Seoul. Situated near Seoul City Hall and a short walk from such diverse places as Cheonggye Plaza, Sungnyemun Gate, and Namdaemun Market, it itself is home to numerous places worth visiting. This is especially true if you want to see one of the five Seoul Palaces lit up at night. Jeong-dong is home to Deoksugung Palace, and during the course of the Jeong-dong Culture Night it is lit up for people to visit after dark.

Most of Seoul’s Palaces only open infrequently at night and tickets usually sell out really fast, so we were pleased to find that Deoksugung Palace was going to be open late for festival goers. (The usual fee applied to enter, but it was really cheap.) We arrived at dusk just in time to see a band setting up to play in front of the main gate. Deciding that that would keep people busy we headed inside to try and explore before the crowds gathered.

Deoksugung Palace has buildings from different eras and is known for being the home of the last king of Joseon and the first emperor of the Daehan Empire. It is the smallest of the five palaces and has a couple of neoclassical buildings built around the turn of the 20th century. It also had the first western style garden. These are juxtaposed with traditional style Korean buildings. This, plus the fact it is the only one of the five palaces to have modern buildings surround it, makes it stand out from the other palaces.

We strolled around as night fell and were amazed at how the buildings changed character in the fading light, some like the Jeonggwanheon seemed to soak up the last rays of the setting sun and glow in the gloom. The first ‘western’ style building to be constructed in a royal palace it was built to overlook the garden.

Other building took on a more somber appearance. 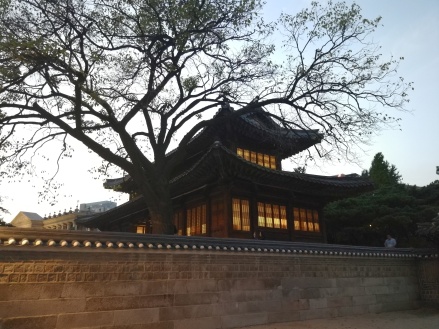 A few of the buildings had art installations set up inside which changed the mood yet again and made for an interesting addition to the buildings themselves. All the art used light in some way which made for perfect night time viewing. 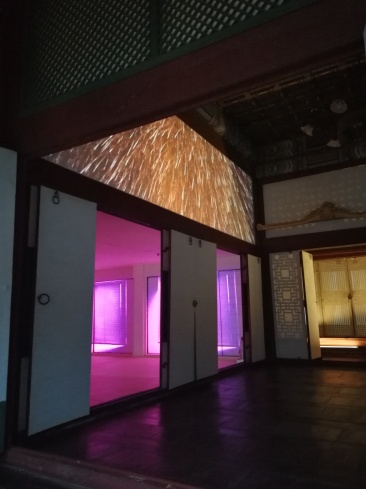 We noticed that people were beginning to gather so we went to see what was happening and found a stage set up for what looked to be a concert. We hung around for a bit but eventually wandered off as there was still too much yet to see.

The outside wall to Deoksugung Palace is famous in Kdramas, and just in general, for being a street for romance. Known as the Stonewall Road it has appeared in many Kdramas. Lined with gingko trees and with little traffic it is a pleasant place to stroll. Because of the festival, however, it was teaming with people. Lined with numerous stalls selling handmade items my daughter was able to buy a couple of sets of earrings and a necklace that were really lovely.  We didn’t get any photos for a while because we were too busy looking at all the neat stuff.

As part of the Culture Night some other places stayed open late and we headed to the Jeong-dong Observatory located in a nearby building. I wasn’t quite sure what to expect for an observatory in the center of a major city. It turned out to be a viewing area located on one of the upper floors that looked out over Deoksugung Palace and as far as City Hall and surrounding buildings. We obviously were there at night so I’m not sure how far you can see on a clear day. There was a small cafe so you could take some time looking at the view. It was cool being able to look down on the Palace and it would be a nice quick break if you are already in the area.

Once back at street level we continued walking and browsing along the very pretty Stonewall Road lit by colorful lanterns and discrete floodlights, stopping every now and again to shop or watch street performers. The balloon guy was particularly good and had a large crowd mesmerized by his creations. We didn’t get a photo of his best work as we were too busy working out how he could make balloons spin inside larger balloon. Some of his fantastic animals were amazing.

Another place that was open was the Seoul Museum of Art housed in what was once the Supreme Court of Korea building. Now only the facade remains and the interior is a completely modern art museum. We visited on a different day when it was less busy. It has various changing exhibits so it is worth checking out each time you’re in Seoul.

Continuing up the street we saw multiple western style buildings which are holdovers from when this area was known as the “European Quarter” as this is where the first westerners were allowed to settle in Seoul in the late 19th century.  You can see the buildings of the first Methodist Church in Korea, for the first modern school, as well as for Ewha the first school for girls. Ewha schools and university are still considered among the best in Korea.

Foreign Embassies still dot this area, as does a small stretch of cute cafes. Once you reach the end of the street you come to a busy street that jolts you back into the 21st century. This is where you can choose to return back down the quaint Jeongdong-gil or cross the busy street to get to Gyeonghuigung Palace and the Seoul History Museum. We chose to return the way we had come and visited Gyeonghuigung Palace and the Seoul History Museum another day. However once we reached the little roundabout near the Seoul Museum of Art we took a left turn to follow the Stonewall street a little further.

This less well travelled route took us past the US Ambassador’s Residence and the HQ of the Korean Salvation Army where they had set up some activities for the Culture Night. My daughter got some free cotton candy and chatted with some of the young helpers who wanted to practice their English.

By now we were really quite tired with jetlag dragging at our senses, so we headed off home. We had a really nice evening at the Jeong-dong Culture Night and if you’re in Seoul for the next one make sure to go. Otherwise take some time to just check out some of the cool places to visit in the Jeong-dong neighborhood.

You may also enjoy Banpo Rainbow Bridge,  Korean Games,   and  My Favorite Place To Stay In Seoul.

Please do not copy or use without permission and accreditation. Photo credits to E and D Marzec.