Posted on November 4, 2017 by kpopjacketlady

Gwangmyeong Cave, technically located within the Seoul Metropolitan area, is situated outside the Seoul green belt in Gwangmyeong. Although we travelled in a friend’s car you can get there using public transportation. The cheapest way would be by using the Seoul subway and then a bus, or if you have less time, by using the KTX train and taxi. Perfect for a half to full day out from the hustle and bustle of Seoul, Gwangmyeong Cave has quite a few things to offer. Named as one of the ‘Top 100 Must-Go Destinations in Korea’ for 2017-2018 it is not yet heaving with foreign tourists, which makes for a pleasant experience.

Gwangmyeong Cave is actually an old mine, mostly for gold, although they also mined silver, copper and zinc. Developed and used by the Japanese under colonial rule it was the site of forced labor and there is rather poignant series of tableau in one of the ‘rooms’ showing and explaining the abuse and exploitation of the Korean workforce. Being an old mine don’t expect amazing natural cave features such as stalactites and stalagmites, but rather a look for the things that showcase the abilities of man to wrest minerals from the earth. Also expect a lot of walking and steps, both inside and outside the mine. 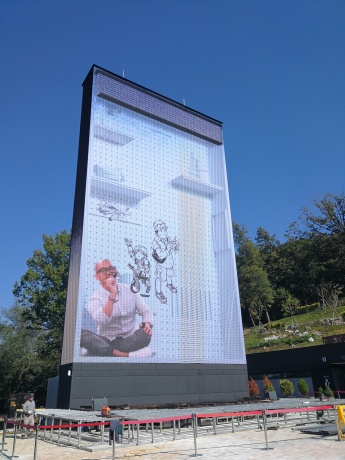 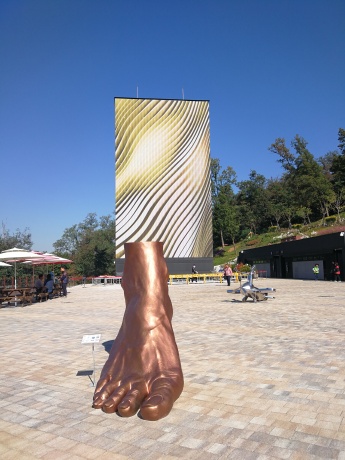 Before you head down the mine it’s a good idea to use the restrooms near the plaza where there are some interesting art pieces on display. You can also grab a drink or a snack if you need to. Gwangmyeong Cave is probably best viewed as being a combination of underground art spaces, experimental underground uses, and a look at some industrial and social history.

Once through the entry tunnel the tunnel splits and guides tell you which way to go, which is basically a one way route around the mine. There are multiple themed areas and the first was a simple tunnel of lights which was rather cool in the darkness. 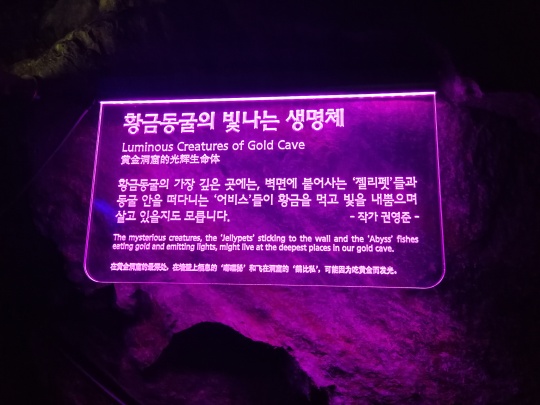 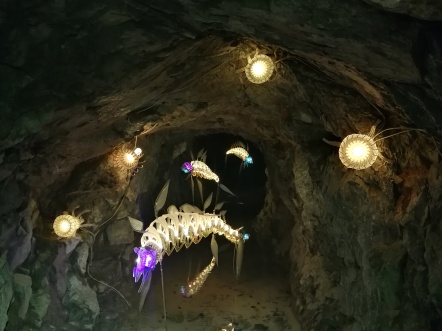 The next area was dedicated to art using light. These were better in person, I particularly liked some of the ‘jellypods’.

There were sections along the tunnels containing things such as plant growing experiments using only artificial light, or fish tanks of gold colored fish to prevent long stretches of just walking through a rock tunnel. 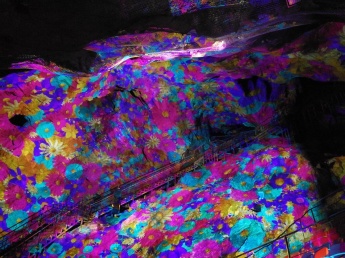 Next we entered the 350 seat Cave Art Center where performances and art events are held. We arrived in time to see a moving art piece projected onto the cave walls. With music echoing and the lights sliding over the huge towering walls it was an impressive display. ‘Shows’ vary and you might see laser, or black light shows. Festival events also take place within this space.

Another room has a small aquarium area using the water from the spring within the cave.

Although quite a few of the areas are on the upper levels of the mine, you do have to go down…..way down, and consequently you later have to climb back up. Just keep this in mind before you decide to go down deeper.

I kinda found this area a bit underwhelming, the walls were painted gold and you could buy gold colored plaques on which to write your wishes, but it was all just a little bit too corny for me. However, don’t let my ennuie stop you from making a wish as who knows, it might come true.

As you near the bottom of the route you can peer down to the underground lake that lies beneath. Even feeling a little like I was in the Mines of Moria, or under the Lonely Mountain I wasn’t really prepared for what came next. 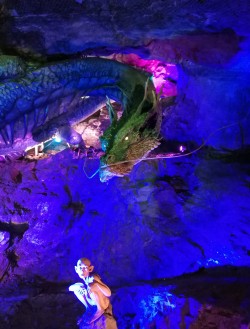 A large open space was filled with Smaug and Gollum and it was quite an impressive sight. The rest of the area had displays and information on other movie monsters and creatures, and although somewhat incongruous was informative and interesting.

An aquaponics system came next and showcased a nice closed system.

Gwangmyeong Cave has been used for various things since it closed as a working mine in 1972 and interestingly 2 uses have been for climate controlled storage. One was for brined shrimp which was stored there back in the day, and more recently for wine. The Gwangmyeong Cave has now become a center for Korean wine from 49 different wineries. Not only is the wine stored there you can also taste and buy wine on premises. 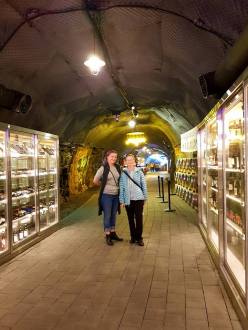 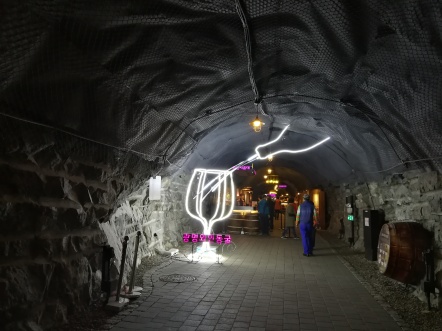 The mine stays at a constant 12-13 degrees celsius which is perfect for ripening and storing wine. The local government has set up a Korean Wine Institute which specializes in tastings, sales, marketing etc so as to assist all wineries in Korea to make their products more known both within and outside of the country. 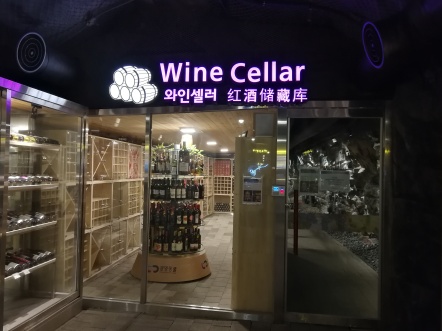 You may have seen an episode of the Kdrama Drinking Solo filmed here back in 2016.

The cave has other attractions both inside and out, including a restaurant, (reservations required), the exhibition on the mines workings under Japanese rule, an extra charge ‘Horror House”, and a nearby Upcycle Art Center. 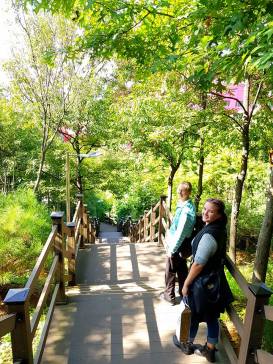 We climbed up these steps to get to the mine, (there is a longer sloping route as an alternative route), climbed down into the mine, climbed back out of the mine and then finally down these steps to the car park, so be prepared. Was it worth it? We thought so, we didn’t know exactly what to expect and it was a little bit of a mishmash of things but we found many things worth looking at and learned some new things along the way. It was also nice being at a tourist site that was mostly filled with Korean tourists and local school field trips, rather than places like Itaewon and the Royal Palaces in Seoul when foreigners often outnumber Koreans. We had a fun morning out of Seoul and think families in particular might find it an interesting place to visit.

You may also like Korean Salt,  Korea and the Silk Road, and The National Treasures of South Korea.