Namiseom Island: A Land Of Fairy Tales And Nature.

Posted on March 7, 2018 by kpopjacketlady 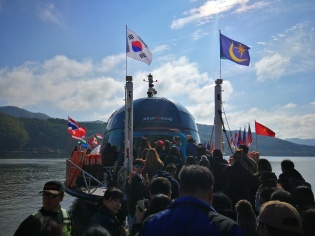 This being our third trip to S.Korea we decided to get out of Seoul and took multiple day trips to attractions in the surrounding areas. To visit Namiseom Island we took an ITX double-decker train to Gapyeong Station, where we got a taxi for the short ride to the ferry that goes across the Bukhangang River to Nami Island. (For other ways to get there see end of this post.) Nami Island opened in 1965 and is renowned for being a beautiful place to visit. It is also famous for the number of Kdramas that were filmed here, the most well known being Winter Sonata from 2002.

The car park for tour buses is huge, but head down towards the buildings and get your tickets for the ferry.  In busy times a lot of people get on the ferry so be prepared. Or if you are adventurous you can take the zip line there and then the ferry back. In the photo above you can just see 2 dots in the sky which are 2 brave people speeding to the island.

There’s a small ‘village’ with an open square area when you get off the ferry, and that’s where there’s bathrooms, and tourist information, cafes, and other interesting things. But wanting to get away from the crowd we headed further into the island. 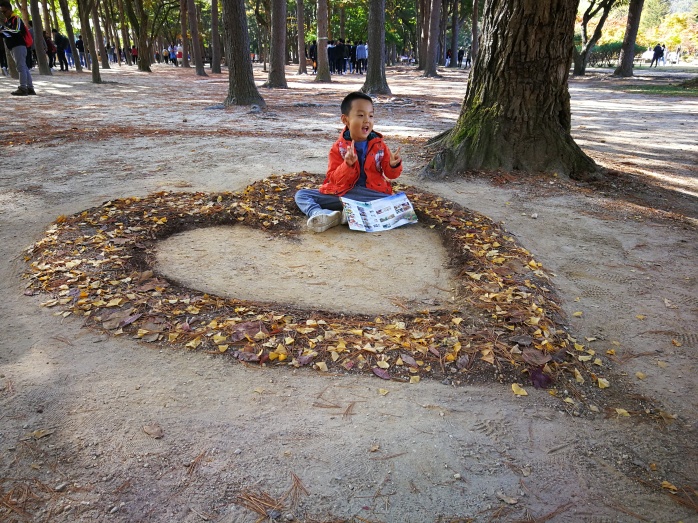 Nami Island is named after a 15th century general who won a great victory over some rebels. It only became an island after the Cheongpyeong Dam was built. Called the Naminara Republic and it even flies it’s own flags, as well as having ‘passports’. Long a popular destination for families as well as for romantic couples, it prides itself as being a ‘land of fairy tales’ and it has even been designated a ‘child friendly theme park’ by UNICEF. The main attraction, however, is nature, admittedly a nature that has been helped a lot by man.

Parks and tree lined streets fill the island with beauty in every direction. It is a place of beauty in all four seasons, although Spring and Fall are perhaps the most popular ones. 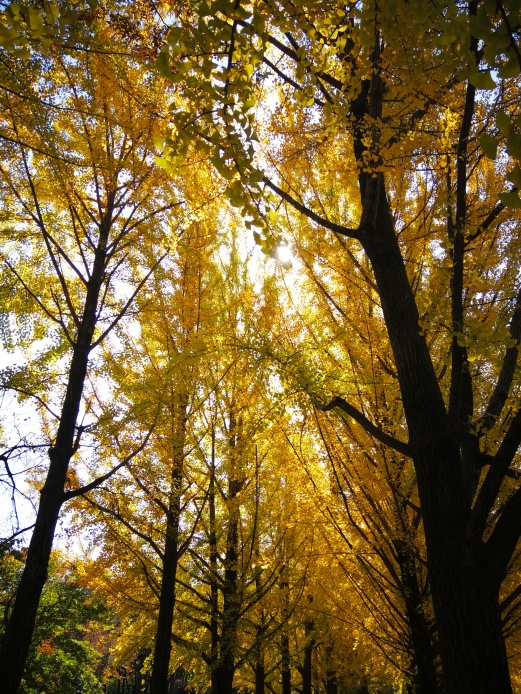 The Gingko Tree Lane, pictured above, is perhaps the most popular attraction in Fall, while the Cherry Blossoms grace the Spring. 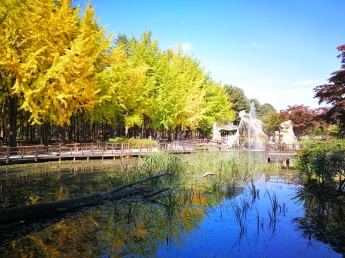 The bright yellow of the Gingkos was everywhere, even overwhelming the other colors of Fall.

Being a place for families and children there’s a lot for them to see and do. There’s a Picture Book Library, a train, lots of local fairy tale characters, plus some animals in fenced pastures, and bike rentals and more. The bikes are also quite popular with couples. If you’re adventurous there’s also some water sports available too.

The ostriches were popular. Even though I think they’re scary birds parents were allowing their kids to get quite close to them. 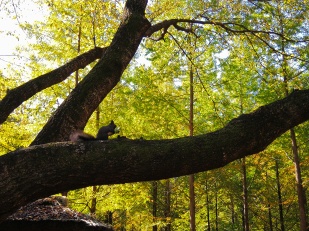 The native squirrels, which were everywhere, were probably the most chased animal around as every kids under the age of 5 seemed to need to chase them. The one in the second photo was busily unwrapping the cloth tape from around this tree….until he was chased away. 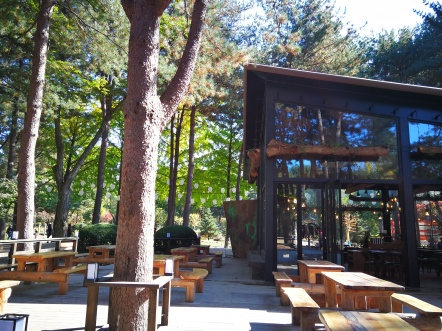 There are a lot of choices when you decide you’re hungry or thirsty. With at least a dozen restaurants and cafes dotted around the island you’re never far away from something delicious. They were also some little places selling traditional street food. We chose a cafe for a quick pick me up after our early morning journey. I’ve become a fan of all the different local styles of Makgeolli we discovered on this trip. This one was made with pine nuts and was very refreshing. 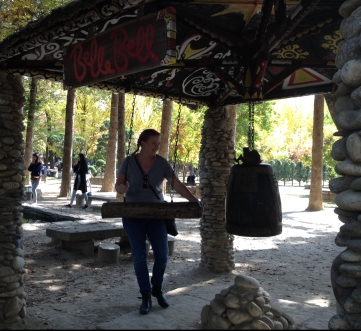 As we wandered around we came across so many interesting and beautiful areas. In one you could stack stones to make a wish, and even ring the great bell.

The whole time we were on Nami Island we felt rested and at peace. Everyone around us seemed to just be enjoying nature and family time. The hassles and stresses of modern life faded away. 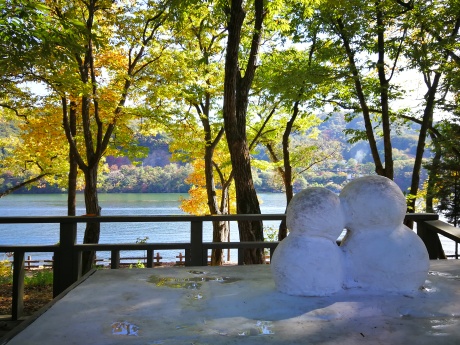 The Kdrama Winter Sonata was filmed on the island and the ‘famous’ spot is clearly marked for fans. A few other Kdramas have also been filmed there since it has so many perfect areas for romantic scenes.

I think I would enjoy Nami Island at any time, but it was particularly beautiful being Fall. It was also extremely meaningful because we were able to enjoy the day out with Ken and his family.

After a fun filled time, we headed back to the ferry to leave the Naminara Republic and look for late lunch. Ken had found that there was a highly recommended restaurant tucked away up behind the tour bus parking lot. With a little effort we found it.

Lunch was excellent. The company was wonderful. And the day out to Nami Island was a day to remember forever. 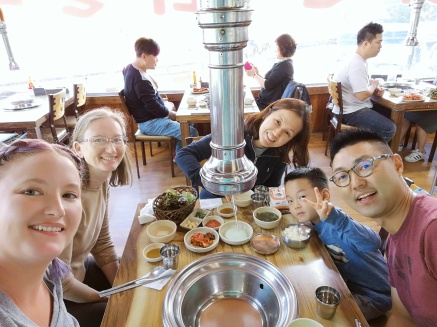 You may also enjoy My Favorite Place To Stay In Seoul,  Gwangmyeong Cave, and Gyeongju: Why You Should Visit On Your Next Trip To Korea. 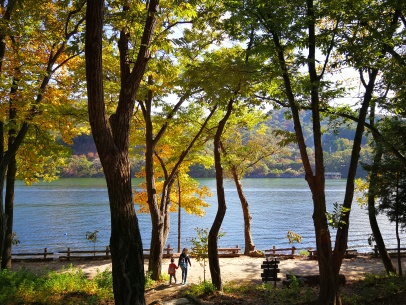 Note. There are multiple ways to get to Nami Island. Many tourists go on specific tours offered by tour companies, others take a shuttle bus. Most Seoulites drive, take the ITX train, or even the subway. Any hotel desk, tourist information office etc can help with which choice is right for you.

This is what we did.

← Temple Food: Lunch In Gyeongju.
200th Post. My Thanks And Appreciation. →

One Comment on “Namiseom Island: A Land Of Fairy Tales And Nature.”