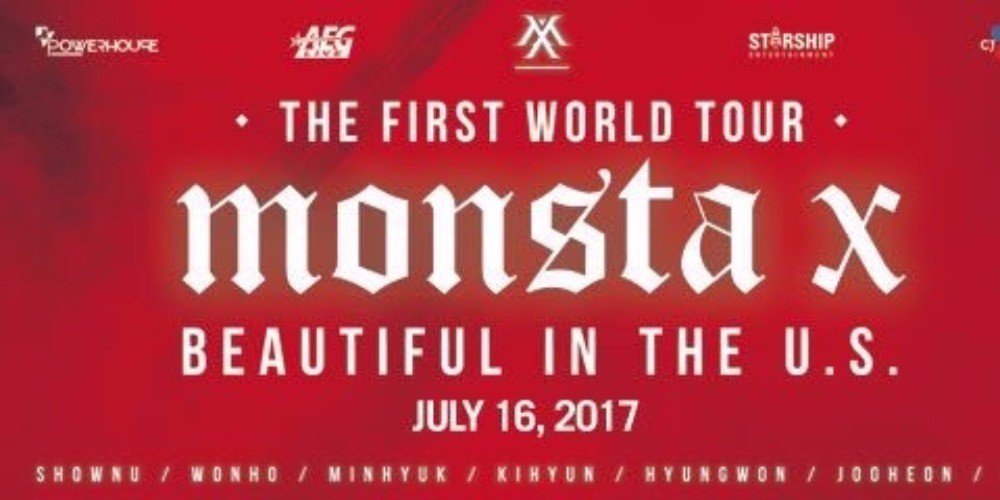 As some of you know I live in Texas and mostly go to the ‘local’ shows, if you can call a 5 1/2 hour drive local! But this time I had to travel further to see Monsta X, due to having already bought my ticket for the GDragon concert that was for the same day.

(Note to the Korean entertainment companies, I know Kpop is becoming more popular in the US, but scheduling 2 Kpop concerts for the same date in the same State is not smart. Splitting the potential audience means less revenue for you and smaller crowds for your artists.)  I decided on the Chicago stop to see Monsta X so I could be among the first to see them perform in the US. 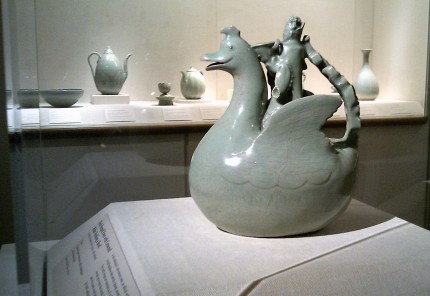 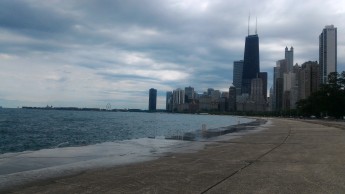 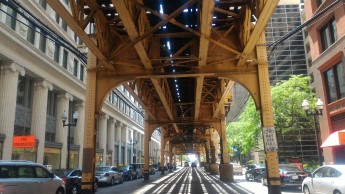 My daughter came with me so we had a 3 day mini vacation in Chicago before the day of the concert. We did and saw so many cool things, and ate lots of great food. Kpop concerts are a great excuse to see more places and see different parts of the US and world.

(Side note. We’ve stayed in hostels on 3 continents and the Chicago Parthenon Hostel was one of the worst we’ve ever stayed at, so I can’t recommend it, even though it had decent reviews online.) 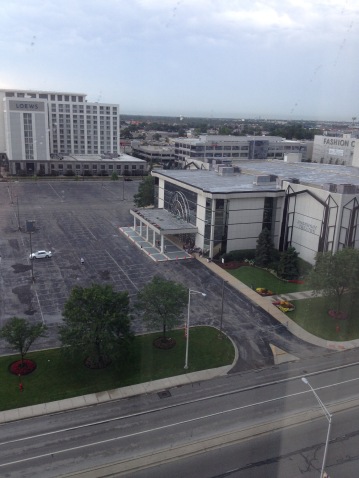 After 3 sunny days in Chicago the weather turned dark and stormy on the day of the concert. Flash flood warnings were issued and there were major traffic and airport delays. Fans were encouraged to stay safe and to keep dry. By the time we arrived at our hotel, the Crowne Plaza across the street from the venue, there were about 16 people in line. (I can heartily recommend the Crowne Plaza for anyone attending a concert at the Rosemont Theatre. The manager was wonderful, letting us into our room early and making sure we could overlook the venue, even though he was super busy with a large Godzilla convention that was taking place the next day meaning fans for that were also filling the hotel.) 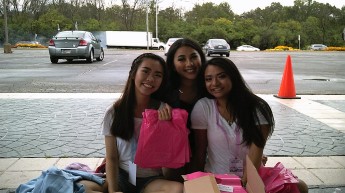 After a quick trip to the nearby outlet mall, where we apparently missed a couple of the Monsta X boys by minutes, I headed to the venue to check out some of the fan events and projects. Even with the inclement weather spirits were high and projects were in full swing. Multiple fan projects were ongoing and everyone was super excited to be there. By the time the doors opened the line to get in circled the building. The Rosemont Theatre seats 4,400 so that was a long line. Having lost my place in line some kind local fans let me in back in line. Thank you.

As per most Kpop concerts everyone was happy and excited to be there and some fans had made postcards and pictures to share with other fans. Others were selling the fanart they had made, while yet others were carrying their merchandize and homemade signs and fanart. Many made new friends and told stories about previous concerts and shared their love for the young men who make up Monsta X.

There was much sadness that member Hyungwon was not able to be at the concert, but everyone was more concerned about him getting healthy than him not being there. The other members, Shownu, Jooheon, Wonho, Kihyun, Minhyuk, and IM were all the favorites of someone in the crowd , and many fans were heard to say it was just too hard to choose one bias when they were all so amazing.

Once the door opened, yes only one, the staff directed us through multiple ticket and bag check stations getting people in fairly quickly. We had to wait inside until finally they opened the auditorium doors and everyone excitedly found their seats. I was quite near the front, but far over to one side. Unfortunately my phone had a severe meltdown and I got no usable photos, however thanks to a kind couple I met before the show one of whom, Anthony White has given me permission to share some of his photos. 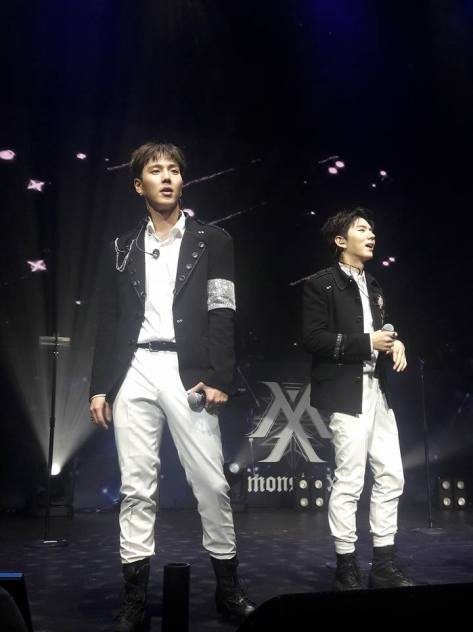 The concert was amazing, the guys started out strong and never let up the entire show. They put their all into every dance move and every note they sang. The audience screamed and sang along and Monsta X fed off that high octane energy and gave one of the best concerts I’ve been too. The sets and backdrop were fairly minimal, with occasional smoke, streamers, and confetti, but the boys didn’t need any of that as they commanded the stage with their talent, power and raw energy.

Not only did they wow everyone with their performances they also engaged the crowd in a relaxed and confident manner, belying them being only a couple of years from their debut, and Chicago being their first tour stop in the USA. Wonho, being the flirt that he is, managed to excite the crowd numerous times. When he took his jacket off Jooheon hearing increasing noise from the audience  suggested we all cheer for Wonho’s muscles, which we of course all did. Kihyun just about died laughing. 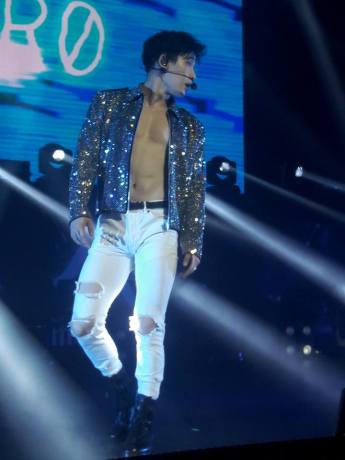 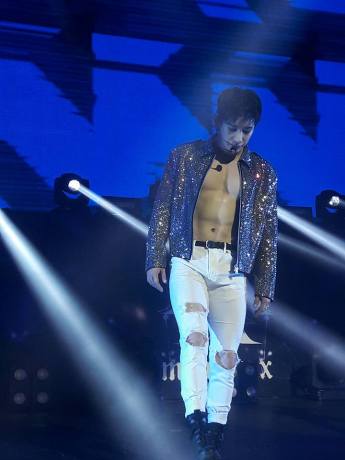 Later Wonho also pleased the crowd by forgetting his shirt somewhere. Wonho, not a particular bias of mine walking in because I thought he’s kinda cocky, ended up quickly redeeming himself in my eyes. Yes, he’s a flirt, but he is a great one. When he looked into my eyes even my old heart beat faster. He prowled the stage at times deliberately focusing on individual members of the audience giving each just enough of a look to let them know he really was looking just at them.  He was funny when he was speaking, and the crowd was too loud he used the music director closed fist to ask us to quiet down a bit, but he worried us too as he slipped and fell at one point. Wonho threw me candy, and during the hi touch actually held my hand and squeezed it while again making direct eye contact. He had incredibly soft hands too. 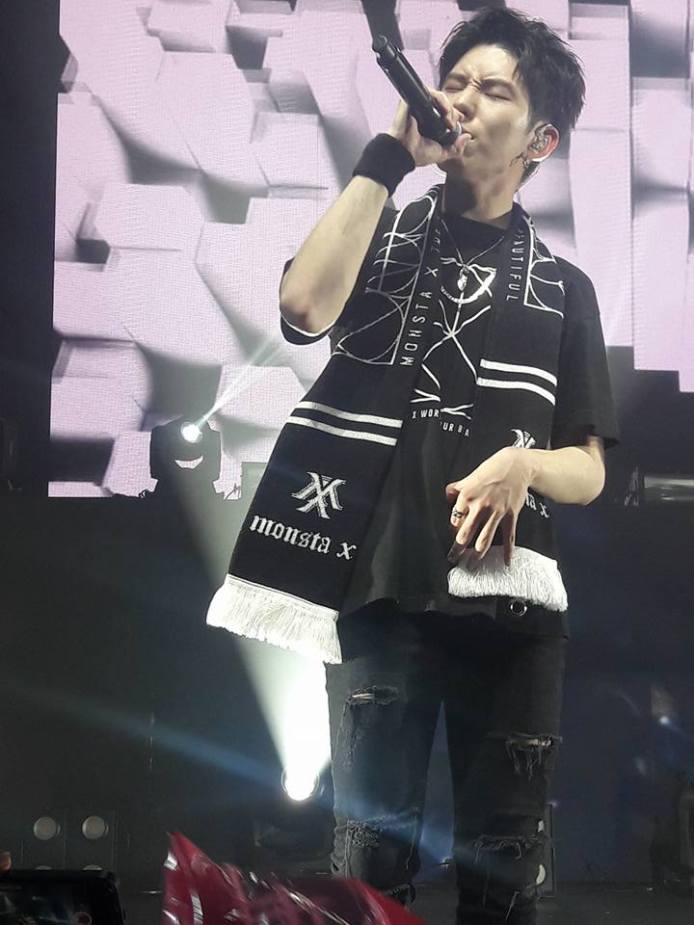 Kihyun also had his flirty moments, although he also showed deep passion and emotion during multiple parts of the performance. It was amazing to watch his serious face change into an incredibly wrinkly one as his eye smiles almost connected to his cheesy grin. He also acted the mom from time to time, trying to make sure everything ran smoothly during the parts where they spoke to the audience. He also threw me candy and made eye contact and held my hand during the hi touch.

Shownu was swagger personified as he patrolled the stage, teasing some audience members as he got close to them. He too was on point for the whole concert and you could see the sweat dripping off all of them throughout the show from the effort they were pouring into their performances. 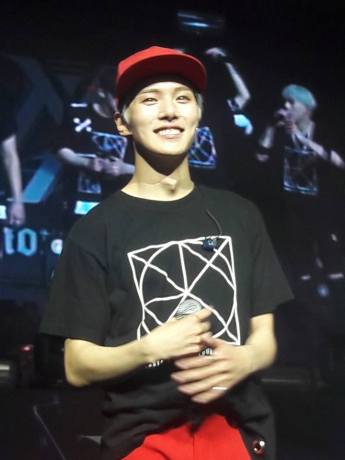 Minhyuk was smiley and cheerful and really seemed to glow with happiness at times. The Chicago crowd has to be complimented for really pumping up the atmosphere. The excitement was palpable. 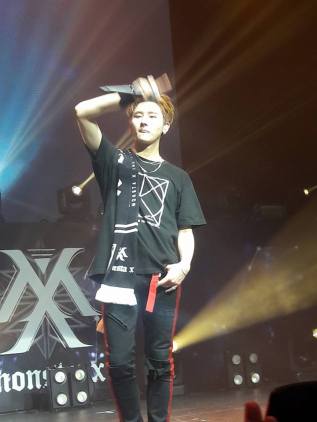 I.M spoke to us in English in his beautifully accented voice, occasionally also translating for the others. There was an official translator, but he didn’t seem to be able to keep up when the boys were joking around. All the members at some point or other tried their hand at speaking English and they were adorable.

And one really can’t overlook Jooheon even though at times I got the feeling he’s kinda shy. He definitely wasn’t so during the concert, as during some of the songs he really looked fierce and tough. The concentration was evident on all their faces as they made every effort to showcase their abilities. Every move was crisp and sharp, every step in time with the beat and synchronized with the others. They showed multiple facets of their repertoire going from slow to fast tempo songs with ease.

They sang about 23 of most of their more popular songs including Beautiful, Shine Forever, Trespass, Rush, and my favorite Hero, but I was so caught up in the concert I can’t give you an accurate set list. Fortunately there are so many fansites and Youtube videos of the concert that I’m sure you can find more about the concert if you want.

I just tried to give you an idea of how fantastic the whole Monsta X concert experience was for me. I’ll definitely head back to Chicago to experience that feeling again.

After all the excitement it was hard to actually take in that it was over. We all wanted more. But the lights came on and the announcements for all those without hi touch or photo op to leave the auditorium began to echo over the theatre. Photo op people were then herded to one area, and hi touch to another. We had a bit of a wait for the boys to have a brief respite after their exertions on stage, and many chatted about the concert and which bits were the absolute best, others sat quietly reliving the highlights over and over in their minds.

We were, as usual, rushed through the hi touch. However, when possible members tried to hold hands and give them a little squeeze, rather than just the quick hi touch that often happens. I applaud them for that and also for looking at fans during the hi touch as well as showing interest and reactions to fans.

The two pieces of candy that were thrown to me, one from Wonho and one from Kihyun, have become a quandary, to eat or not to eat?

Thank you Monsta X for an excellent performance, and thank you to the Chicago fans who made me feel welcome.

Photo credits to original owners. Pre concert photos to Elizabeth & Debora Marzec.  All concert photos, with thanks, to Anthony White.

Please do not copy, or use, without permission and accreditation.

11 Comments on “Monsta X Beautiful In The USA: Chicago.”