Posted on November 22, 2017 by kpopjacketlady

In part one I mainly spoke about the lead up to the actual groups performing, here you’ll find my thoughts on the main part of the concert. There was quite a bit of speaking throughout the evening by the MC Nam Goong Kim and other presenters as this was the opening ceremony/performance for the festival. It was during these interludes that I really felt how cold it was sitting in such a large open space on a cold October night.

First to perform was Momoland who sang Freeze, and Wonderful Love. They were really energetic and cute and did a great job. Whenever JooE was on a stage it was hard not to just focus on her because of her ebullient personally, but the other members were worth watching too, and they started the evening off with a solid performance especially being the opening act on such a cold windy night.

After their set there was a little bit of interaction between Momoland and the next group Astro as the boys gave flowers to some of the girls. 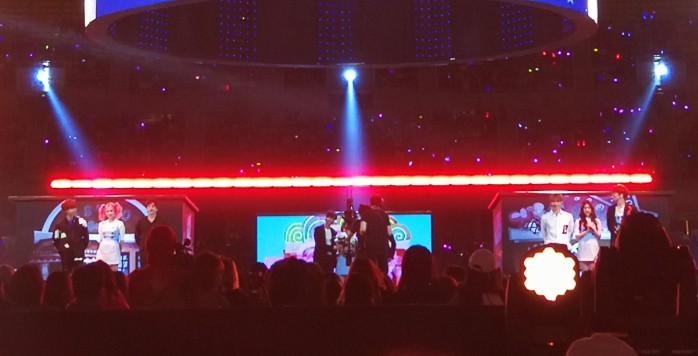 One thing about a live recorded show is that the cameras often get in the way of those watching it in person. I’ve watched the recorded show and it doesn’t do justice to the actual live show. They kept moving the cameras around like crazy which ended up with a choppy and uneven end result. It is actually one of my pet peeves with Korean music show camera practices, by trying to be all clever and capture cool angles they often don’t convey the real feel of the actual performances. Also I don’t know how they did it but they seemed to also capture crowd photos of people who look totally disinterested in what was happening on stage. Everyone around me was pumped up and having a great time.

Astro came next and gave us a sweet, cute and bubbly Baby, with lots of smiles and winks.

The change from Astro to the next group was very dramatic with dark cloaked people stalking onto the stage with intense dark lighting and music. We were all curious and then slowly began to realize it was SF9.

After the reveal and the extra dancers had left the stage they performed O Sole Mio. This was probably one of my favorite performances of the night. From their dramatic entrance to their well synchronized dancing, and their command of the stage they had the crowd mesmerized. I also enjoyed that their jackets became capes which was a nice touch.

Things slowed down for Nu,est W who sang the slower tempo Hello. I had been very much looking forward to their performance as some of my friends are huge fans, and I had followed them in their early days, think Face and Not Over You. However I have to say I was a little disappointed. There was a lot of walking around the stage and them kinda posing. In all it felt as if they were uncomfortable. I may be alone in thinking that as they seemed very popular with the fans around me.

When this name came on the big screen the crowd went wild. Wanna One walked out in black pants and white tops which was a great choice for standing out on the large, colorful stage.

They sang Pick Me which got the fans hyped back up, they also made sure they walked to the edges of all sides of the stage to allow more fans to get a good look at them. Towards the end of their set numerous young dancers came out and danced along on the outer circle stage. Pretty much everyone in the stadium was bopping along in their own way. 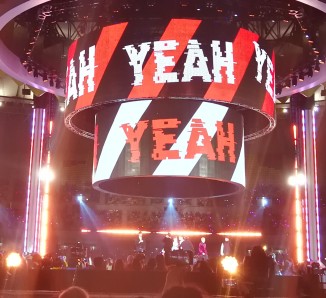 It may be hard for some to believe, but the cheers and screams for the next group actually intensified. They came out with that ‘bad boy’ swagger and charisma they have and took the place by storm.

They performed Bling Bling + B.Day with raw power, and pumped the crowd up until everyone was jumping and singing along. It was amazing how we went from being at a concert to being part of a rocking party. iKON were loud, somewhat crass, and fantastic. The fire and flames helped with the party feel, and definitely warmed us up. (We were close enough to feel the heat, which was welcome.) 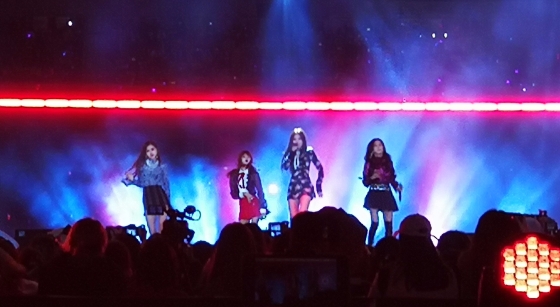 Label mates Black Pink were next and I had been looking forward to seeing them live. They performed Playing With Fire and As If It’s Your Last. Their performance was good, just it seemed like a little something was missing. I wanted them to be great and they weren’t. They had a stronger stage presence than many of the other girl groups and they definitely weren’t cute. Rather they were sultry, and flirtatious in a more grown up way. more like women than girls. Their performance was solid, but I didn’t feel that ‘wow’ I had expected.

This is about the halfway point for the evening and rather than make this post too long I think I’ll add a part 3 to cover the other performances.

In defence of many of the groups, both male and female, the stage itself was huge and very colorful and attention grabbing. It was hard for everyone to compete with that, plus the wind and cold night. The boom cameras zoomed around, and the cameramen running around on the stage didn’t help either. Plus the audience had been outdoors for hours and were possibly hungry and thirsty so it took a lot to grab and keep everyone’s attention for the whole time, so I feel that I may be being a little harsh in relating my experiences. I do, however, look forward to seeing all these performers perform in an indoor venue in the future, and I will stress that I thoroughly enjoyed the whole show.

You may also enjoy KPOP Night Out @ SXSW,  HyunA Charms Her Dallas Fans,  and  SHINee World V Tour In Dallas.

Please do not copy or use without permission and accreditation. Photo credits to Elizabeth and Debora Marzec.

← Seonyudo Park: In Photos.
Nighttime Cruise On The Han River. →

One Comment on “Busan One Asia Festival: Opening Concert 2017. Part 2.”