Nighttime Cruise On The Han River.

Posted on November 25, 2017 by kpopjacketlady

Many of the major cities of the world have river cruises as one of the must do things for tourists when they visit, and the Han River cruise is one of the ‘top ten’ things to do in Seoul. We enjoyed our cruise, however, it is not like doing a river cruise on the Thames, (London) or the Seine, (Paris). To begin with the Han River is wide, very wide, so you’re a fairly long way from the river banks, secondly there’s not really that many notable or historic landmarks along the way. So much of the cruise is just looking generally at the city lights, with the Namsan Tower in the distance being the most famous landmark, and this can almost disappear on a cloudy, or hazy night.

This doesn’t mean that it isn’t a fun thing to do, it was enjoyable, even if it was a little cold up on deck. (We went in October.) It is a good idea to go during the time the Banpo Bridge Rainbow Bridge does it’s evening shows. (Usually April -October, but check before you go.) The docking area is lit up with festive lights and there’s a cafe area and restrooms for while you wait for your cruise. 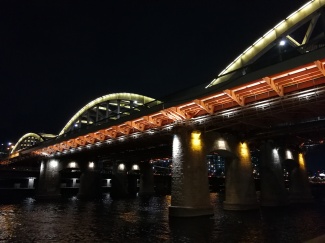 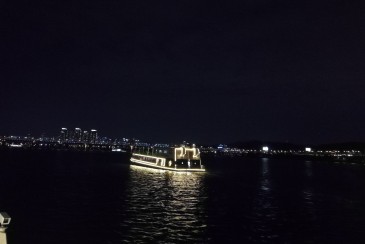 The bridges are lit up as are the other cruise ships, while there’s lots of city lights to see during your trip on the Han River.

One of the more colorful sites you can see from the river  is the Some Sevit Culture Complex. It consists of three made made floating islands with buildings on them, one of which was used as the gene laboratory in The Avengers, Age of Ultron. It is worth visiting Some Sevit either during the day or on into the evening as it is a cool area to walk around and there’s a restaurant, a cafe, and art spaces.

The Banpo Rainbow Bridge Fountain show is probably the main attraction though. We had seen it before from the land so we were looking forward to seeing from the river. It really is quite impressive. 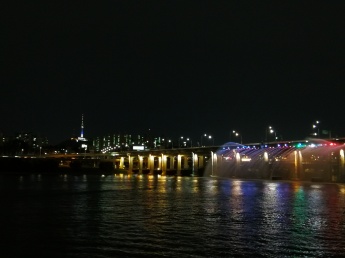 You can get much closer to the fountain from land, but the view from the ship was really nice too.

The cruise company does a little fireworks show just before you dock for some of the cruises, which was a nice ending for the cruise.

The cruise was nice, perfect for a romantic couple, or just to watch the shore go by, but not sure I’ll do it again, as Seoul has so many other things to do at night. If you’ve done the cruise and have anything else to add please use the comments section below.

You may also enjoy A Look At Hongdae,    Pojangmacha: Better Known To Some As A Soju Tent,  and    Seoul Bamdokkaebi Night Markets.

Please do not copy or use without permission and accreditation. Photo credits to Elizabeth Marzec.

One Comment on “Nighttime Cruise On The Han River.”