Posted on September 25, 2016 by kpopjacketlady

Seoul is a city that never seems to sleep, maybe because there’s just so much to do at night including shopping. Most people have heard of the Dongdaemun Open Market which doesn’t even open until 10pm and stays open until 5am, but Seoul also has some seasonal night markets, including one at Dongdaemun Design Plaza, that are perfect for those who want a fun night out. The Bamdokkaebi Night Markets are only open on Friday and Saturday nights from late March until late October.

They are called Bamdokkaebi after a Korean folk figure. Bam means ‘night’ while  a dokkaebi is an ogre, demon, giant type mythic figure who can be frightening, or in this case humorous and friendly. So Bamdokkaebi is a friendly giant who only comes out at night and disappears during the day, just like these markets. The dokkaebi carry a club that is somewhat like a magic wand and they help out good people while tricking and punishing the bad.

There are 4 Bamdokkaebi Night Markets each with a different theme or concept. There’s the World Market at Yeouido Hangang Park which overlooks the Han River,  the Youth Runway and Dance Night at the beautiful Dongdaemun Design Plaza, the Sports and Health one at Mokdong Stadium, and lastly the Seasonal/Holiday Market at Cheonggye Plaza which has limited opening dates.    (Please check times and dates for all of them before you go as they vary slightly for each venue.) 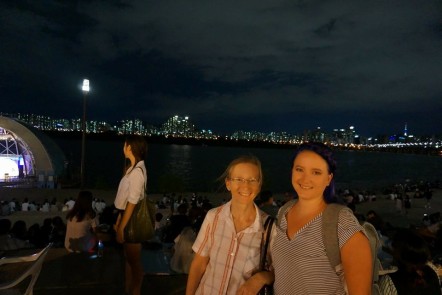 We only managed to visit two of the four, Yeouido and Dongdaemun, and thoroughly enjoyed both of them. The World Market at Yeouido was absolutely heaving with people who were enjoying everything the market had to offer. The lines at the 30 or so food trucks were long, but since there was a lovely cool breeze off the river and the city lights sparkled in the distance, most people didn’t seem to mind the wait for food from different places around the world. The handmade craft booths were interesting although not particularly world representative. There were busker like performances as well as a stage set in the Han river. Families and couples were sat on the banks on the river relaxing and enjoying a pleasant evening outside, whilst groups of friends could be seen chatting and laughing with each other. There were a few tourists, but the crowd was mostly made up of locals out for fun on a Saturday night. It was a perfect place to be part of the experience instead of an outsider watching from the sidelines. 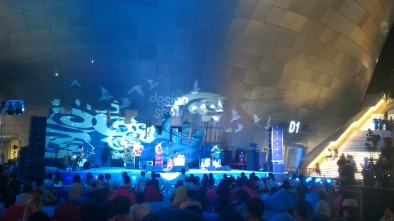 The Market at the Dongdaemun Design Plaza was extra special, mostly because of the setting. Although originally there was some controversy over the design when it was first built, the Dongdaemun Design Plaza really is a spectacular piece of architecture, especially at night, when different panels light up and glow. It is a free flowing large scale work of art, and having courtyards and hidden nooks made it a perfect place to hold an event such as this. There were performances on the main outdoor stage as well as musicians and buskers hidden around the curves and contours of the building. The craft booths had a variety of items for sale that were geared more towards the young and fashion conscious. The Meokgeori, or Food Truck Street, was extremely busy, this time because the focus was on young, innovative styles of food. Cutting edge chefs and fusion style foods were on offer from a multitude of food trucks. (I too see the irony in my photo showing a hot dog stand, but I was too busy having a great time to take appropriate photos!)

All in all we enjoyed both night markets and they were perfect for a stop on a typical weekend night out in Seoul, which usually involves multiple ’rounds’ at different places and not ending until the wee hours of the morning long after the subway stops running. Just as well taxis are cheap in Seoul!

Photo credits to me, Elle Marzec and our friend Hye Rin. Please do not copy or use without permission and accreditation.

← A Walk Down KStar Road.
Neolttwigi: A Korean Seesaw Game. →