Posted on December 14, 2016 by kpopjacketlady

If you enjoy Korean dramas you would have to have been living under a rock to have missed the hype for the drama, Goblin: The Lonely and Great God. As of now only 4 of 16 episodes have been released and the response from the audience has been incredible. Today a report noted that it was more popular than Descendants of the Sun, (DOTS) a mega-hit drama from the same writers which aired during the first part of the year.

Korean dramas often add multiple aspects to their stories to include history, mythology, time travel, ghosts, and even inter-dimensional story lines have been popular. Some dramas called Sageuks tend to follow history somewhat more faithfully than most, but Korean writers never seem to let the facts interfere with a good plot-line. So how much of the folk lore in this, my current favorite drama, is based on the traditional supernatural characters that inhabit the Korean mythos? This tale of tragedy, romance, and hope, has at its’ core a Dokkaebi, a Korean goblin. Dokkaebi is usually translated as goblin although it only has a few similarities to the old European goblin, and could perhaps equally as well have been translated as, gnome, imp, brownie, orc, demon etc. Also many folk creatures have changed their characteristics over time, particularly as they began to appear in books, movies and online games. Basically what you think of as a goblin may not have been your parents, or grandparents goblin, just as I’m sure this story will alter our future ideas of what a goblin is and can do.

The traditional Dokkaebi was a mischievous figure, known to have a soft spot for the innocent and those who did good, and to punish those who did evil. A trickster type, he used his magic hat of invisibility to play pranks on people. He is also known for carrying a large club that has the ability to transport items from one place to another. He can’t actually ‘magic’ something into existence, but can make it appear by magically taking it from somewhere else. So for him to give you a pile of gold he has to have taken that pile from someone else, so he’s somewhat morally ambivalent like many trickster gods. 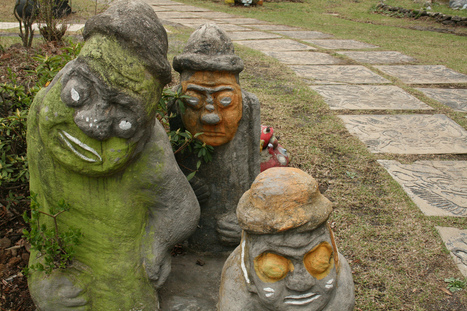 In the drama the goblin, Kim Shin, played by Gong Yoo, has some of these attributes, although oddly it seems like the grim reaper has a hat of invisibility, in reverse, in that humans can only see him when he is wearing his hat. Kim Shin’s sword stands in place of the traditional club, and it can definitely make gold appear and disappear. Also it may also be what allows him to move himself, through doors, to different places. But our drama goblin is also called, ‘protector of souls’ and a ‘god’. He is described as ‘he is water, fire, wind, light and darkness’, not the typical description of a Dokkaebi. So somewhere at the beginning of the drama something happened that didn’t just turn the inanimate sword into a goblin, but gave it the soul of Kim Shin a general beloved by the people and considered a godlike man by them. When after 20 years his faithful and loyal retainer returns to Kim Shin’s death place, God speaks and says that the people have saved his soul, but that because he also killed innocent people he will be punished by remembering all the deaths he caused and to outlive all the people he has loved during his immortal life. Clearly Kim Shin becomes more than a goblin, in fact he becomes more like a guardian angel with a flaming sword type figure. He is more powerful than the grim reaper, he knows who has been reincarnated, he can move from location to location, and the weather and nature respond to his moods, plus he interferes with the lives of humans. He takes on some of the attributes of a goblin, a guardian, and a god. 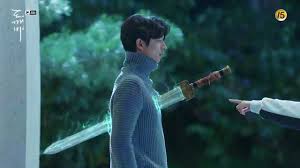 Some of the other characters are no less interesting. Wang Yeo, played by Lee Dong Wook, is a grim reaper with amnesia who is perpetually gloomy, yet totally dedicated to his job. The Joseung Saja are guides to the underworld and don’t actually kill, although due to a bureaucratic error heroine Ji Eun Tak (Kim Go Eun) fears that he might make an exception in her case to set the books straight. Grim reapers have appeared in other kdramas, notably in Arang and the Magistrate, with their black hats being a defining feature. 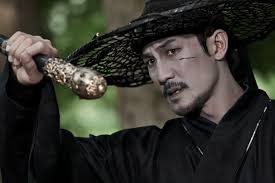 Heroine Ji Eun Tak is somewhat of a puzzle and I think we’ll learn more about her powers as the drama progresses. For now, due to Kim Shin saving her/her mother at her moment of birth/death she is not on the list of the living, or the dead, she has the ability to see and communicate with ghosts, can follow the goblin when he transports to another place, and can summon him to her. She seems to me to perhaps, unknowingly, to be a shaman or priestess of some sort. She definitely is not a normal girl.

I feel that perhaps the princess in the first episode also has some future part to play since she was the owner of the ring the granny has later. Maybe they are the same person, because the princess does say ‘I know everything’ and the old granny seems to know stuff too, or are they the 2 sisters the old ghost mentions? Plus there’s a female grim reaper…..puzzles and questions, just enough to keep it interesting. I’m looking forward to each new episode and hope the drama can keep up the plot and character development.

I also feel that although our hero Kim Shin is more than just a traditional goblin, he still retains enough of the Dokkaebi for the terminology to suit him. His playfulness with the water at the fountain in particular did make me think somewhat of the humor of the trickster god.

You might also like Stone Men of Jeju, Seoul Bamdokkaebi Night Markets,  Hwarang, the Flower Boys of Silla, and  Is it the Kdrama Actor.

← My Favorite Place to Stay in Seoul.
Yeomiji Botanic Garden: In Photos. →

3 Comments on “Goblin, Guardian, or God?”