Posted on December 17, 2016 by kpopjacketlady 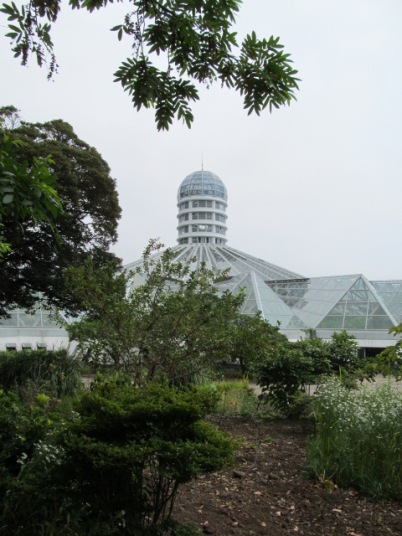 Yeomiji Botanic Garden, on Jeju Island, is home to the largest greenhouse in Asia. Laid out somewhat in the form of a sunflower it has different gardens radiating out from the central hub. It is the focal point of the much larger outside gardens. Visiting the gardens on a slightly damp morning we decided to head inside to explore before the sun came out and warmed up the greenhouse even more. Free lockers near the entrance were a boon as we could safely store everything we didn’t need while we strolled from indoor garden to garden. 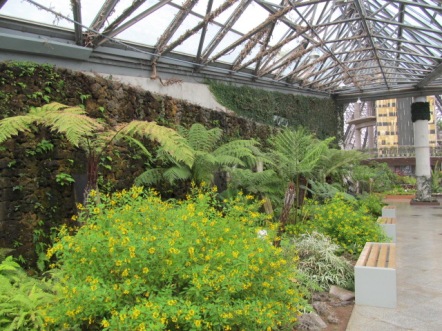 The entrance area itself was a beautiful garden with a pond with ‘islands’ of reeds representing the placement of a constellation of stars in the night sky. In this area they also have lovely borders of flowers and changing seasonal displays.

We moved into the first garden to find a flower garden, which although pretty seemed to be suffering a little from being in a greenhouse in August. Looking at photographs from other people it looks as if this garden is probably far more attractive in springtime. 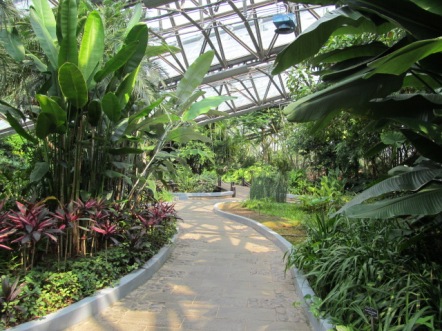 The flower garden led us to the aquatic garden which had some beautiful water lilies and lotus blossoms that were picture perfect. 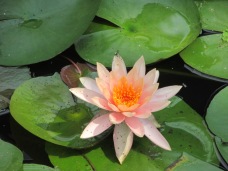 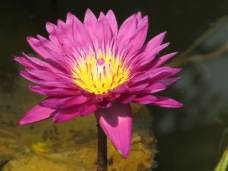 The next garden was in some ways the most impressive due to the size and age of some of the cactus and succulents on display, although it was somewhat odd for us to see agave and prickly pear cactus in this setting as they are weeds in our garden back home. Nevertheless they had some very nice rare and unusual cactus and succulents among the more common ones. 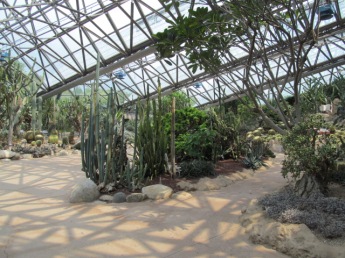 After the stark beauty of the cactus we moved on to the ‘jungle’ garden which was lush and very green after the muted tones we had just walked through. Tucked among the foliage there were hidden dinosaur figures, no doubt to entertain visiting children.

Next was perhaps my favorite of the greenhouse gardens, it was one dedicated to tropical fruits and it had all sorts of fruit like starfruit, and things I didn’t recognize growing and hanging from the trees as if waiting to be picked. 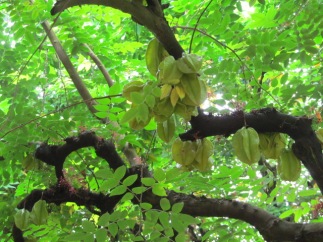 By this time we had strolled around and only had the observation tower left to climb, however, we were distracted by a cafe selling ice cream, as well as other goodies.

The central observation tower had clean restrooms in the basement and a glass fronted elevator up to the first observation point. There were stairs if you wanted to go up even higher. 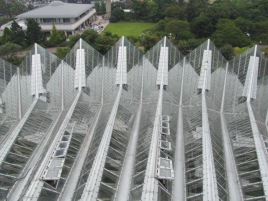 From this height you could not only see the incredible construction of the greenhouse, but the bridge to Cheonjeyeon Falls, as well as views down to the surrounding gardens. On a clear day you can see Hallasan Mountain, the Coast and sometimes even Marado Island. 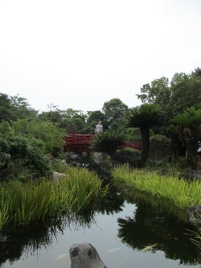 The outside gardens are quite expansive and cover a large area. If you’re not up to a lot of walking there is a tram that will take you around for an extra fee, but obviously the best way to see a garden is to walk around. The Botanic Garden is divide up into smaller gardens, each with a theme, such as Japanese garden, Korean garden, Italian garden, bog garden, native plants and more. 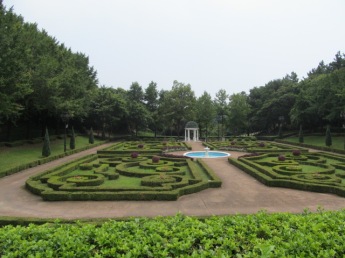 My favorite was probably the bog garden for its simplicity and quiet beauty, the only sound was the breeze among the reeds with the occasional insect buzzing and frog croaking. 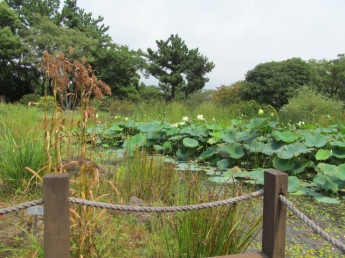 If you visit Jeju Island I highly recommend you visit Yeomiji Botanic Garden. It is easy to get to by bus, costs less than 10 bucks to get in and is right next door to Cheonjeyeon Falls, but the best reason of all is that is it one of the nicest gardens I’ve ever visited.

You might also like Spirit Garden,  Halla Arboretum,  The Stone Men of Jeju,  Ramie: “Wings of a Dragonfly” and  Korean Innovations: The Heated Greenhouse.

Photo credits to me. Please do not copy or use without permission and accreditation.

← Goblin, Guardian, or God?
Kpop Songs For The Holidays. →