Posted on March 9, 2017 by kpopjacketlady

Charismatic  Kpop singing sensation HyunA performed at the Grenada Theater in the Lower Greenville area of Dallas last night. (Monday 6th March 2017) An older theater with character, the Grenada was the perfect venue for HyunA’s hybrid fan meeting/concert. Nestled among a cluster of restaurants, bars, and cafes the theater was small enough to be intimate and yet large enough to contain the screams and cheers from her fans. 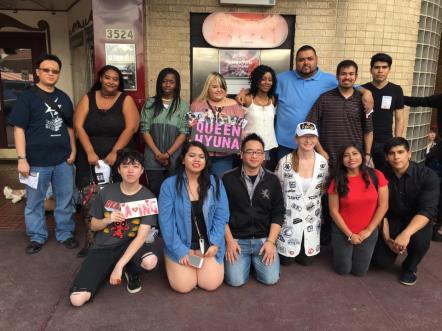 Fans began lining up before noon, although many chose to show up from mid afternoon onward. Being a standing only venue, early birds got to stand front and center once the doors opened. (Fans were graciously allowed into the theater to use the restrooms for most of the day, something other venues should consider doing.) The volunteer staff tried to keep the fans informed and in the correct lines, although this faltered somewhat when it was time to enter. The volunteers also had clear signs up for the pricing of merchandise, as well as plenty of people managing the merchandise tables. It was more organized than the usual pre concert mess found at many venues.

Once inside it was time for fans to take selfies, meet up with other fans and share the excitement of finally seeing HyunA live.

The evening started with the winner of the dance cover competition performing for the crowd as an opening act. He did super job of covering ‘Bubble Pop’ with the crowd cheering him on with great gusto. 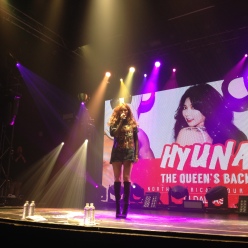 The backup dancers came on stage first and showed that they indeed knew how to dance, each having a very brief moment in the spotlight. Then HyunA appeared on stage and performed Roll Deep while wearing short shorts, a Kiss t-shirt, and boots with tall stiletto heels. Her hair was down and curly, and framed her face beautifully. (Later she even commented at one point that she had had her hair done like that especially for us.) Right from when HyunA entered the stage she was drawn to our group, smiling and laughing at our ‘enthusiasm’. She did a fantastic job covering the whole stage and making sure all her fans saw her, but she definitely had a partiality for our side throughout the evening.

There was a brief lull as there was an introduction and welcome by HyunA, accompanied by  her translator, and the host of the evening’s fan meet style parts of the show. On occasion throughout the night HyunA spoke a few sentences in English to the fans but mostly the translator helped her out. 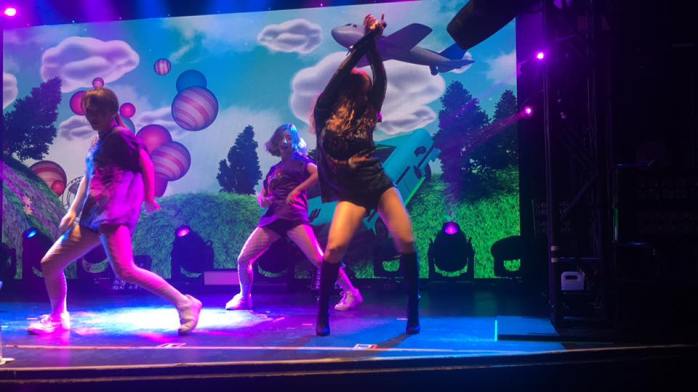 This was followed by Ice Cream and then French Kiss, both keeping the fans riveted on her performance. It was hard to look away from her sexy dance moves and sultry glances. 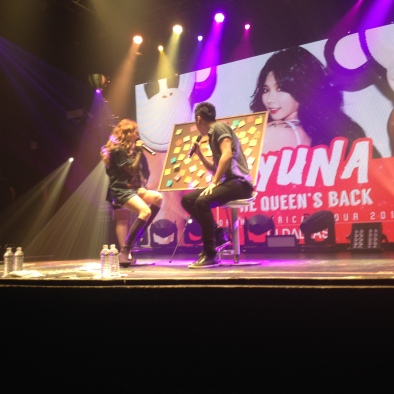 Next we had fan meet style interaction as she sat down to answer a few questions that had been submitted by fans. It was amazing how she changed from her hot, sexy image to being quite cute and open with her answers. Then just a few minutes later she was back to sexy and provocative for A-talk and U+Me.

After a video intermission of sorts, HyunA returned in a new outfit, this one much more comfortable looking regarding her footwear. A ‘matching answer’ game was played and HyunA sweetly signaled her choice of answer to each of the contestants, so that everyone went home with a ‘prize’. A photo, each of which she kissed before handing to the recipient, was their prize.

The dance competition was next and a friend of mine was one of the chosen few. She got to interact with HyunA quite a bit and even won the competition. Even though she got a whole bag full of signed merchandise I think the highlight for her was receiving a back hug from HyunA.

Red and Change were the next mini set and the change in footwear, if even possible, allowed for even more vigorous dance moves. By now the crowd were cheering and singing along quite freely. Throughout the evening  the parts were she had a featured artist in the original, instead of singing those parts herself, she and the dancers just focused on the choreography.

During the last fan service and farewell one of our group threw a Mexican flag on stage, and my friend Sebastian managed to have the cap he bought for HyunA thrown on stage. HyunA immediately wore it, even into the introduction of her next song, until she tossed it to staff off stage. (He also bought the cowboy hat for CL that she wore on Instagram after her Dallas show).

Freaky and How’s This were the last songs of the night and HyunA, and backup dancers, never slowed down. The energy in the theater was a palpable thing, encouraging more fan screaming, dancing and singing than before. 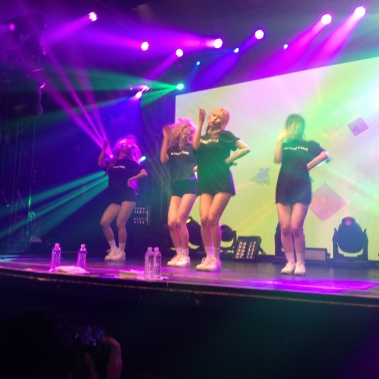 After she left the stage the crowd demand an encore, and when she returned to the stage she was wearing her tour t-shirt and looked the most comfortable of the night. Her encore performance was obviously Bubble Pop, and it was a great way to end the performance part of the evening. 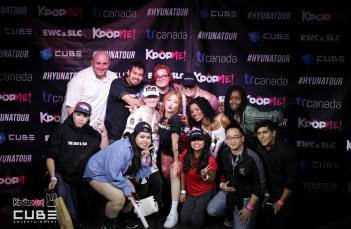 This is where I think KPOPME, and some other Kpop event organizers drop the ball. Everyone is on a high from the concert/event and then you make them wait. The volunteers valiantly tried to get things moving, but time was wasted when instructions couldn’t be heard, and then apparently someone threw up where the line for Hi Touch was meant to form up. The Hi Touch was so fast that some people missed it completely. Even HyunA looked a little stunned at how fast the fans were rushed past her. Then after that was done there was much milling around as they tried to organize the photo op. That too was very rushed. I have no idea what happened to the ‘meet and greet’, ’cause I never saw that happen. This mean’t that much of the ‘high’ that the fans felt was leached away by the waiting, and then the rushing. That plus the fact there was no ‘meet and greet’ left quite a few fans questioning whether the high price of the tickets had been worth it. Quite a few American fans feel that they are not being respected as such by the event organizers, and that they are just seen as a way to make money off their passion for Kpop. KPOPME is not the only company that has made fans feel this way. Come on guys, we love you for bringing Kpop groups and events to North America, but maybe you could try a little harder to make us feel that we aren’t just a source of money for you.

One last photo of our group before we all dispersed, some to have a night out, others to begin the long treks back to Colorado, Louisiana, as well as the further reaches of Texas. I want to thank everyone who made a great night out even better. It’s good to have Kpop friends. Looking forward to meeting up at the next concert. SXSW Kpop Night Out anyone?

You may also enjoy +Hello Bi+ches Tour 2016 + Dallas, SHINee Shines Bright In Texas, and   Got7: Fly In The USA

Photo credits mainly to ‘Sangheili19’ plus whoever’s phone took the group shots. Also credit for the 2 ‘official photos’ to  Kpopme/Cube.

← Korean Games, And Where To Find Out More About Them.
Easy On The Eyes: Korean Models Turned Actors. Part 3. Updated For 2020. →