While traveling around Korea to museums, and historic buildings such as palaces, it is fairly common to see these wooden handcarts. These are known as hwacha and along with the missiles they fired they were instrumental in protecting Korea from pirates and foreign invasions for over 300 years. Usually seen loaded with singijeon or rocket arrows they could also shoot a type of bullet. They were perhaps the most formidable defensive weapon of their time. 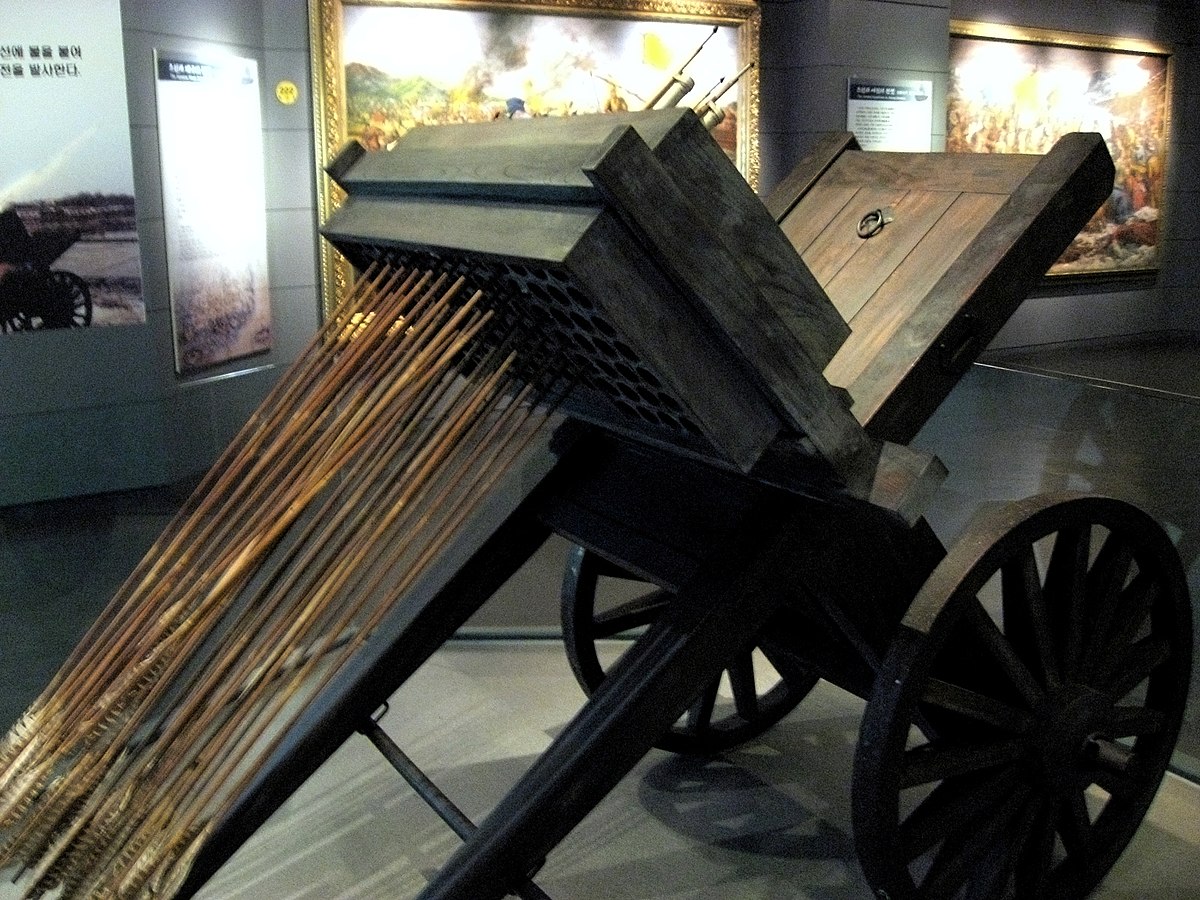 The story of their invention dates back many centuries and was dependent on the Korean people being able to obtain the recipe and materials to make gunpowder. The Chinese discovered/invented gunpowder and used it originally for fireworks and then later for weapons. They did, however, realize its importance and so they closely guarded the secret of how it was made. ( The first mention of gunpowder in Chinese texts dates from 142 AD, the first firework displays from around 700 AD, and the first weaponized rockets from around 900 AD.)

By the middle to late 14th century Koreans knew of gunpowder both from those who had studied in China, and from the fireworks displays that were put on at Royal Palaces for entertainment. But being able to buy carefully controlled amounts of gunpowder  and weapons is not the same as having your own supply. China, the Mongols, and Japan (particularly Japanese pirates) all had eyes on Korea at this time because of its resources and strategic importance, making Koreans nervous about their ability to defend themselves and self rule their country. Having gunpowder weapons was essential for Korea.

Choe Mu Seon, (1325 – 1395) the son of a government official is credited with ‘inventing’ gunpowder in Korea, but what that means is that he built on earlier Chinese knowledge and made the first gunpowder created and made in Korea. A subtle difference, but still not an easy task considering the Chinese laws against any knowledge of of the production of gunpowder being shared with foreigners. Choe spent some time in China studying and gained some knowledge there, and later supposedly bribed a Chinese merchant for the ‘recipe.’ However, even if you know the ingredients, you have to know the correct proportions for gunpowder to work.

By 1376 Choe had worked out how to make gunpowder, and how to get the correct ingredients. Once he showed the power of his new ‘weapon’ he gained the support of the King and Government. He was given a laboratory/workshop, along with a factory and people to man them. (1377) He not only worked on producing gunpowder, but also on all the weapons that could use gunpowder. In the 14th century Chinese weapons manual, the Fire Drake Manual, bombs, mines, fire arrows, rocket launchers, primitive flamethrowers, cannons, and gun like weapons were all mentioned. It is said that Choe’s workshop and factory was not far behind in their list of weapons they were creating and improving.

A favorite weapon was the fire arrow, which had been around for a long time as basically a gunpowder charge attached to an arrow and aimed at advancing troops.

But it wasn’t long before the arrows were being fired out of a bamboo, or sometime metal, tube. In Korea these ‘rocket’ arrows were known as singijeon. There were 3 sizes, with the largests being more like an ‘arrow cannon’ with a charge attached. The Chinese had similar weapons, but the Koreans kept improving upon the idea and over time came up with better weapons. They wanted a method of firing more than a single arrow at a time and came up with the hwacha, their version of a multiple fire arrow launcher. 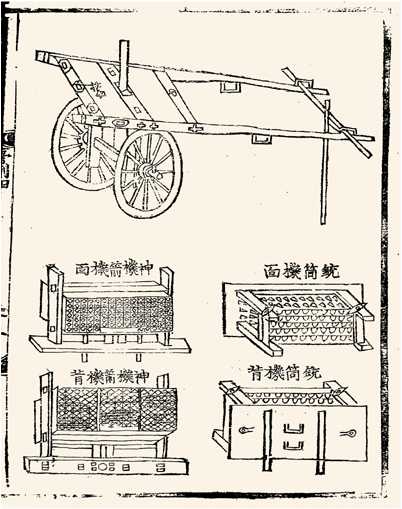 It is not known exactly when the first hwacha was constructed, but the early models were probably constructed in the lata 14th century, and then by 1409 Choe Hae San, the elder Choe’s son, created the first battle ready hwacha. Improvements were made in the 1450’s and the hwacha became one of the most devastating weapons of the age. Armed with multiple arrows, between 100 and 200, the hwacha could decimate closely ranked troops in battle. Used mostly as a defensive weapon it was portable and could moved to where it was needed. It was even used on board ships against Japanese pirates. 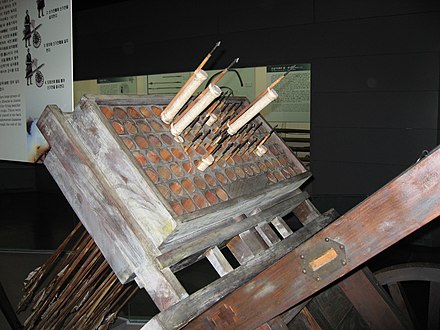 If you want to see a fictional account of the development of the hwacha you can watch the 2008 movie, The Divine Weapon. Although not true to history, the movie shows the effectiveness of the hwacha in battle. If you want to watch something more modern you can watch Mythbusters, episode 110, where they test the hwacha’s abilities. One thing the Mythbusters don’t mention is that some of the singijeon could also have gunpowder packets attached to them that had a separate fuse so that they would explode when the arrow arrived at their target. So gunpowder propelled arrows with small gunpowder charges added to them, flying by the 100’s towards their target. What a terrifying spectacle for the enemy troops.

So next time you see a hwacha quietly on display, stop a moment to recognise it for what it was, the ultimate weapon of its time and place.