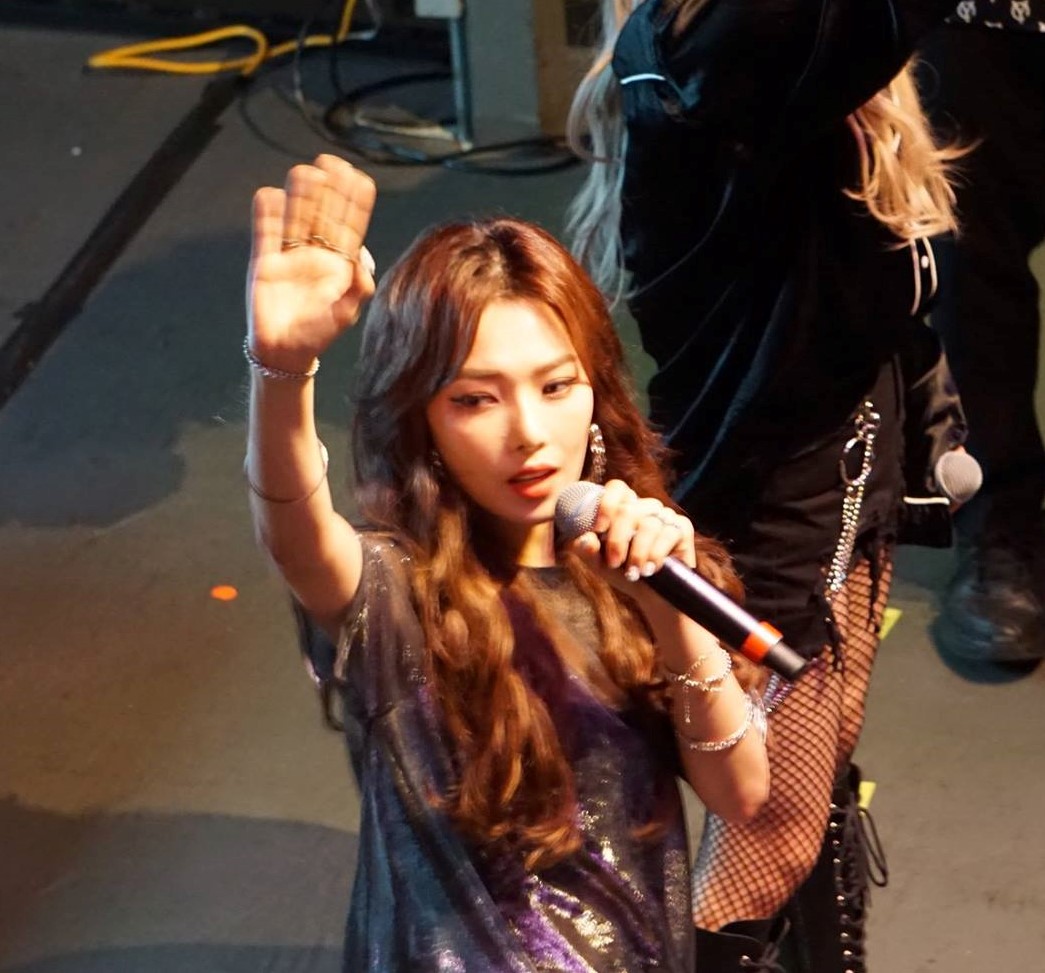 Korean Spotlight is the new name for what was formerly known as Kpop Night Out, an event sponsored by Kocca and others. It is an official showcase at SXSW, one of the world’s biggest music festivals. Last year the lineup included Big Phony, No Brain, Galaxy Express, MFBTY, Hyolin and Red Velvet. You can see my review here. 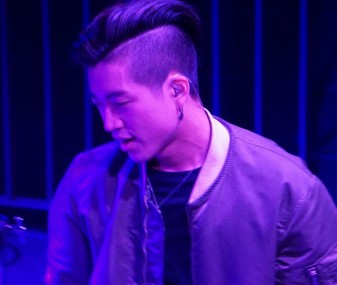 This year the lineup was Say Sue Me, Junoflo, DPR Live, Crush, Cifika, Lee Hi, and KARD. As I’ve come to expect at this event, the venue staff although pleasant, didn’t handle things well. I have complaints, which I won’t go into here, but I have emailed Kocca to let them know how messed up the whole line up and entry process was. I was number 548 in the door and totally missed the whole first act, even though I had been inline from 9:30 am onwards. The venue only holds 1,000 so over 400 people who were in line missed the first act and possibly some of the 2nd too.

So my apologies to Say Sue Me, both from myself and from all the other fans who wanted to see you perform. From what bits we could hear from outside you sounded great. 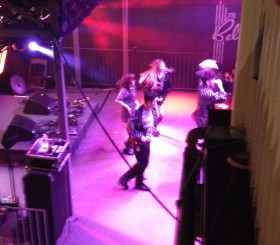 With the floor already heaving with people we headed upstairs and kinda got a view of the stage. If you read my review from last year you know I’ve experienced watching from up near the stage and from near the back, so it actually works out that this year I can give you a review from the side and up from the balcony. The Belmont is not a great venue in that a lot of the space available doesn’t actually have a view of the stage. Basically the venue can hold 1,000 people, but the floor area is jam packed if all 1,000 try to see the stage at the same time. Upstairs was less packed, but only those lining the balcony rail could see the stage. We were at the closest end which gave us the odd angle, further along the front rail had a pretty decent view. 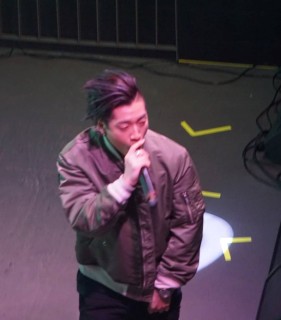 First up, for us, was Junoflo, who I saw last year when he performed here with MFBTY. Actually from California, he was on Show Me The Money in 2016 where he gained experience and respect for his abilities. He is now signed with Feel Ghood Music.

He was accompanied by Anne One this year who was also here last year. An experienced singer she is also signed under the Feel Ghood Music label. 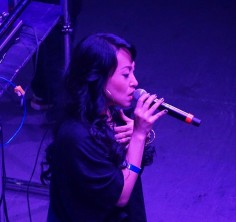 Junoflo was much more confident this year and easily got the crowd amped up and excited.  Ann One has an amazing voice which she effortly used to capture the audience’s attention. They had also brought their own DJ, but unfortunately I didn’t catch his name. Together and solo they put on a great performance. Their set passed by quickly as everyone was so focused on their engaging performance. I think we’ll see great things from Junoflo in the future as he is definitely talented. 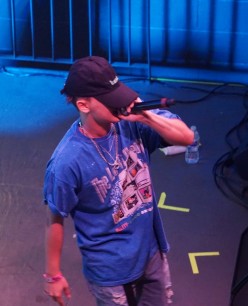 Next up was DPR Live, another young man with a lot of talent and potential. Fairly new to the music scene he has hit the ground running and was maybe the most anticipated performer among those waiting in line. Many were there specifically for him. I guess my biggest criticism was that no one could see his face from the side, or the front because of his cap. 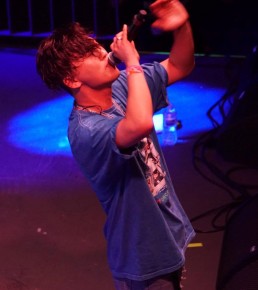 There was quite a cheer as he finally took it off. 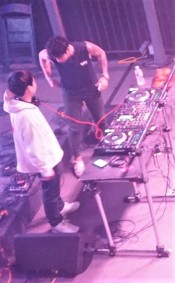 There was also quite a bit of noise for one of his stage companions, Christian Yu, who could be seen bouncing around at the back of the stage.

The lineup order for the evening was a little odd as the next act was also a solo young man. Crush has been around for a little while now, since 2014, and has a solid fan base and had many fans in the audience. 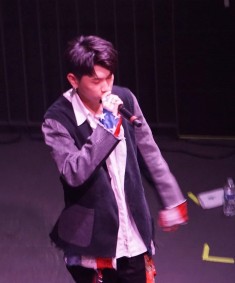 He draws from an eclectic mix of music and one can hear echos of multiple musical styles in his songs.

He started off a little low key, but he soon was his more edgy self, interacting with the audience and the flock of photographers in front of the stage.

He eventually warmed up enough, both symbolically and literally, to take off his flag inspired jacket. More engaging and dynamic. he ended his set on a high note with the audience pumped up and excited. 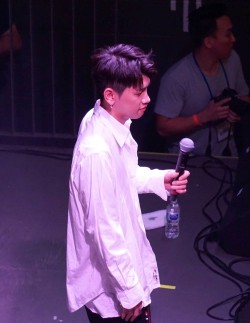 And that’s when poor planning led to a lull in the action. 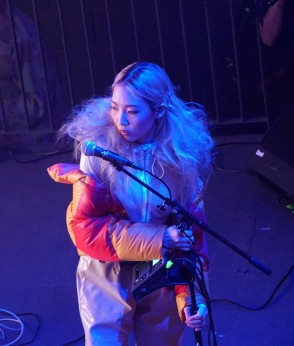 Cifika came on next. Although she herself was visually eye catching, she basically just stood on stage singing/playing her music. She just wasn’t spellbinding enough to keep everyone’s attention. I felt sorry for her as she would have been better received if she didn’t come on stage after three dynamic guys in a row. 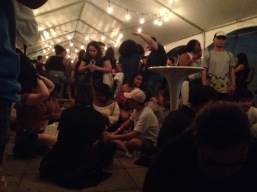 While she was on stage people sat down, many weren’t even attempting to see the stage. When Lee Hi came on next some stood back up again, but others just left. I even saw one girl sleeping quite soundly on the floor. I didn’t take a photo as that would have been quite embarrassing for her. 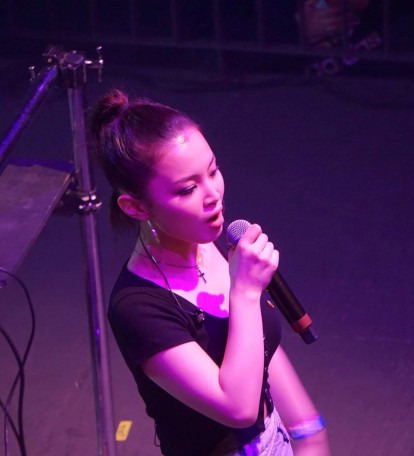 Lee Hi is talented and lovely and many fans were excited to see her out of the YG dungeon and in the USA, but putting her after another solo woman just did her a disservice.

She was engaging and sweet and her lovely voice soared through the warm night air, but fans who didn’t have a great view became disinterested. Just by voice alone she couldn’t hold them.

Unfortunately Lee Hi was put in an untenable position, but hopefully she didn’t see people begin to leave. The fans that remained rallied and tried their best to make her feel a Texas welcome. I just hope they succeeded. I thoroughly enjoyed her performance and I hope she comes back to the US sometime soon. 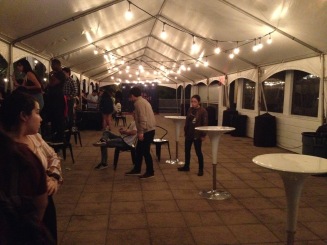 This is a photo of that once full area right before KARD came on stage. Although there’s a line of fans along the balcony rail, about half the total people left before KARD appeared on stage. 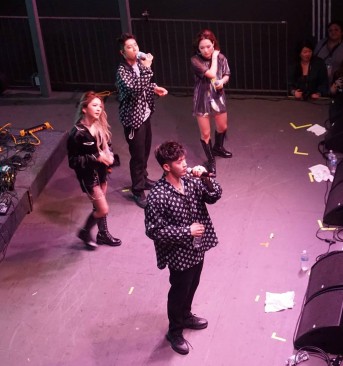 The final act and highlight of the show was KARD a co-ed group that has a solid fan base in the US. I saw them in their pre debut show in Houston and liked them. They have good chemistry with each other and seem really quite grounded. Their music is catchy and fun. 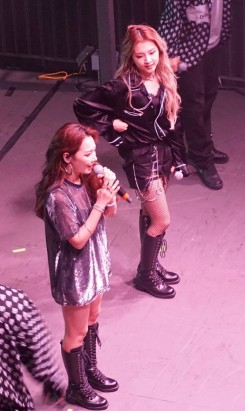 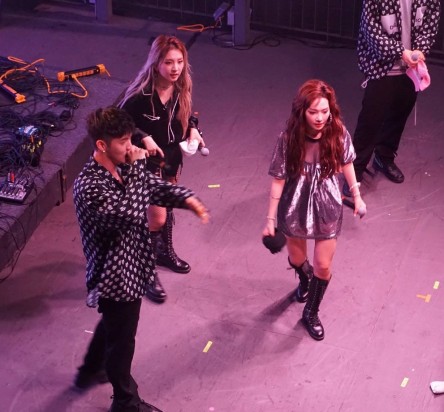 They performed a mix of their newer songs and a couple of fan favorites. They also engaged with the fans and threw tea shirts and things into the crowd. They finished before 2am, but the venue staff started making us leave before they had actually left the stage.

There were some good acts, but the lineup was off, plus the chaos and confusion of getting in, and the misinformation given out by the staff all contributed to a less than stellar experience. Highlights ended up being the small things, like making new friends and catching up with old ones, seeing some of the performers out on the streets and waving to fans, or even just seeing them before and after their acts in the ‘green room’ area. 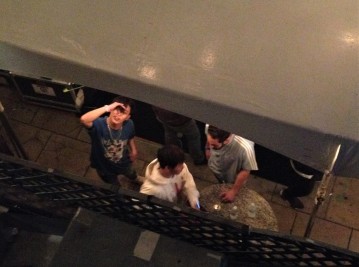 I travelled from San Antonio, stood in line for 10 hours, watched all the performers, until 2am and then we drove back to San Antonio. I was awake for 22 hours straight. I don’t think the companies in Korea understand how dedicated some fans are, even for groups that are not their ‘biases’. Not one of the groups/soloists was a favorite of mine, but I went anyway…..to support the growth of Korean music in Texas and the US in general. So in return please listen to our concerns and advice. If given a chance we can help you in so many ways, from improving your fan base here in the USA to making sure you understand the nuances of the places you are visiting.

My thanks go to my friend Sebastian who did all the driving, and took almost all the photos. Photo credits to original owners. The photo of Say Sue Me is from the internet. All the others are by Sebastian Gallardo, plus a couple are mine.

← 200th Post. My Thanks And Appreciation.
Wolji Pond At Night: In Photos. →