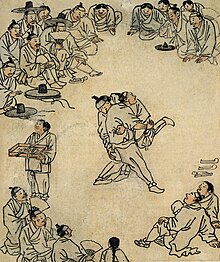 Painting by Kim Hong Do.

I was first introduced to Ssireum through Korean variety shows such as Running Man and Two Days One Night, and became somewhat intrigued with it. Although I’m not a particular fan of wrestling  Ssireum seemed to me to be just as much a head game as a physical one, with each participant feeling out the other, waiting for just the right moment to move. Strength of course was a major part of each bout, as was speed, but experience was not obviously not to be discounted. It was fun to watch.

SSireum holds a unique place in the hearts of Koreans and when I was trying to find facts about its history I kept running up against what is often called ‘folk knowledge’, that is things that everyone knows to be true, but actually may not be. It not only became hard to separate fact from collective knowledge, but also to not offend. This crops up with legends, origin myths and oral traditions all over the world. As I was growing up I hated the way my ‘Robin Hood’ was picked apart by historians and researchers trying to find the real man. So I hope to give a fair history of this wonderful traditional Korean sport.

Wrestling is one of the oldest sports known to man and was independently ‘invented’ by multiple cultures all around the world. The World Sports Encyclopedia lists over a hundred different known variants, and many more have probably been lost over time, or were only played in small local areas. Most traditional wrestling styles had at their core the use of a hand to hand struggle, without the use of blows, although some styles did have some slapping as seen in Sumo. Some modern styles of wrestling, which evolved from the circus wrestling of the 19th century, have more entertainment features and aspects of a spectacle rather than sport.

The first evidence of wrestling comes from a Sumerian sculpture dated to over 5,000 years ago. There are also statues from Ancient Egypt and Ancient Crete that are over 4,000 years old. Types of hand to hand combat are described in Ancient China from the Shang Dynasty onwards and statues, and engravings depicting wrestling have been found on bones, tortoise shell and bronze items have that been found also from that time period. Originally a military exercise, along with archery and charioteering, by the Warring States Period (475-221 BCE) wrestling had also become a competitive sport. Wrestling was also a spectator event in early China, with Emperor Wu in 108 BCE entertaining his foreign guests with jiaodixi (wrestling) performances.

There were various names and different styles of wrestling, including styles that used belts, in China and  Mongolia and whether either country influenced Korean traditional wrestling styles is still being debated.

It is unknown when Ssireum developed in Korea, but it was likely quite some time before the Goguryeo Kingdom (37 BCE – AD 660) when the mural below was painted on one of the tomb walls. (Tombs and other architectural art works don’t tend to show unimportant things, so for Ssireum to be portrayed it must have been important and/or popular for some time before the tomb was built.) The Gakjeochong Tomb is often called The Tomb Of The Wrestlers because of this mural. The tomb is now in a part of China which was once part of the Korean Kingdom of Goguryeo. I, like most other people, assume that this is a portrayal of SSireum, or an ancestor style of wrestling, but one or two people have suggested it might be an image of a religious rite or ritual. At this time wrestling was known by many Sino Korean names and there may have been multiple methods of play. 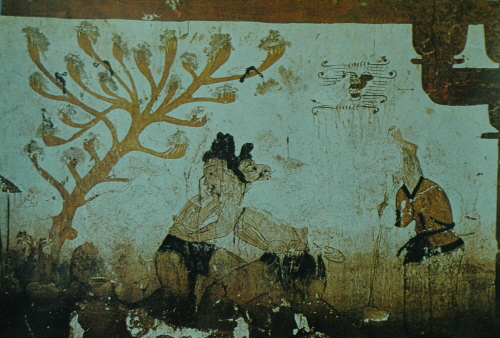 Wrestling continued to be practiced in Goryeo, (AD 918 – 1392) and it was not only a sport but was also tied up with religious festivals, particularly the Dano festival, where Ssireum competitions were an integral part of the festivities.  In AD 1330 King   Chunghye, (AD 1315 – 1344) was reprimanded for wrestling with an errand boy. It appears, however, he continued to wrestle and folk knowledge says he wrestled every day.

In AD 1430 a man was killed while playing Ssireum, and in AD 1560 the palace servants were banned from playing Ssireum on palace grounds, although children were still allowed to play. In AD 1664 the loser stabbed the winner of a Ssireum match. These few minor reports in all the court documents tends to show that the sport only shows up when dealing with occurrences that had to be dealt with by government officials. Outside of these references there just isn’t that much information.

It seems to me that Ssireum may have been a sport of the military and lower classes, particularly the agricultural class, which makes sense when you consider the Yangban focus on education as a method of social and political advancement. That is not to say that young men of all classes didn’t test their strength against each other by wrestling, but that it wasn’t particularly a noble pastime. We know that King Sejong (CE 1397 – 1450) held a Ssireum competition among his soldiers while on a pleasure cruise, and he is also said to have hosted family events where they watched archery and wrestling matches. This might hark back to the earlier Chinese example of Ssireum being a spectator sport for the upper classes rather than a participatory one.

Ssireum may well have started with religious overtones in agricultural communities which then turned into a military exercise and pastime, but it really became popular when it moved into the growing urban areas. Seoul was known to have multiple areas where wrestling took place and competitive matches occurred. Spectators increased as city folk had easier access and the popularity of the sport took off. Matches were held across the country and standardized rules began to develop. Not needing much in the way of specialized equipment it was a much easier sport to participate in than say archery, and the rewards could be quite large with prizes such as a bull being popular.

During times of occupation and of uncertainty SSireum in many ways came to symbolize one aspect of Koreanness to Koreans.  It could be looked at in perhaps the same way people see an image of a small thatched cottage with a garden overflowing with flowers as representing Englishness. Ssireum is unique to Korea, and evokes idealized images of their agrarian past, before the onslaught of modernization and globalization. It is many things, it is the oldest extant Korean sport, it is a polite sport that is still very competitive, it can also be seen as a non violent sport, but most of all perhaps is that it tugs at their collective identity. It is theirs.

Ssireum rules can be found in many places online and Youtube has many examples of matches so I won’t try to explain the rules here. Ssireum has seen many declines and reversals in popularity over time, but hopefully it will be able to survive in the modern world, where without commercial backing many sports disappear. There has been a small revival in interest recently with variety and other TV shows spotlighting Ssireum, and even idol groups getting in on the act, but whether this means Ssireum will be more than an attraction at festivals and folk life villages remains to be seen.

Please do not copy or use without permission and accreditation. All image credits to original owners.

← Best Kpop Rookie Groups For First Half Of 2016.
The Humor In Mud: Idols and Celebrities At Play. →