Best Kpop Rookie Groups For First Half Of 2016.

As those of you who follow me know I prefer male Kpop groups to female, but even if I included girl groups there weren’t any really stand out female rookies in the first half of 2016. Cosmic Girls might go on to do well, but so far it seems to me to be more that they have a good marketing ploy and production staff than talent, since their choreography is just so so and the MV’s rely heavily on camera gimmicks and short takes, making the end result choppy and distracting.

There were more male rookie groups to choose from for the first half of 2016, with a few of them having the potential to do well. Imfact, and Voisper deserve at least a listen, and may well succeed in the future, although as each year passes I feel it is harder and harder for the rookie groups to gain a foothold in an already talent saturated industry. Although some of the the NCT project groups debuted in 2016 and seem quite good I’m not a fan of the whole project group idea. It truly makes it obvious to me that Kpop is an industry that is going to go with whatever concept will make them the most money. Since they are a project group with one of the big entertainment companies backing them I have no doubt they will be a commercial success, but I think the format does a disservice to both the artists and the fans, so my choices for the first half of 2016 are Astro, and KNK.

Astro was formed in 2015 under Fantagio Entertainment. They are a 6 member group, all of them being 20 years old or younger. They starred in their own web drama called ‘To Be Continued’ in August of 2015 and then had their own reality show, ‘Astro OK! Get Ready’ in January of 2016 which allowed their audience to see, and to get to know, them before their official debut. They debuted in February 2016 with their first mini album Spring Up. They had enough overseas fans to help them reach #6 on Billboard’s World Albums Chart. The title song and first MV was Hide & Seek which has well over 2 1/2 million views on Youtube. They quickly followed this up with a second single in March, Cat’s Eye which didn’t do quite as well. I often watch group’s dance practice videos as I can then get a better look at their choreography and dance skills, and I thought both were up to par.

Their second mini album Summer Vibes was released on July 1st and the title song Breathless  really does have a carefree summer feel to it. I really liked the concept of the MV and the cute visuals. It is cheerful and bright and a perfect pick me up on a hot summer day. Summer Vibes also placed high on Billboard’s World Albums Chart, and Breathless got to 11th on Billboard’s World Singles Chart.

Astro has appeared on variety shows such as Weekly Idol and After School Club as a group, and as individuals on many more. They are scheduled to appear at Kcon later this month, and will be holding solo concerts on Aug.27th and 28th in Seoul, S.Korea. It looks to me that they are starting off well as rookies and I hope they will do well in the future. 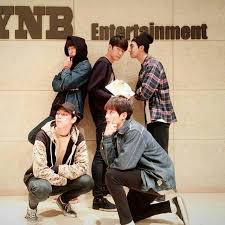 KNK is a 5 member group under YNB Entertainment. All of the members had been under different agencies before they joined KNK, and although all are in their early twenties they had spent an average of 5 years as trainees with those other agencies before their debut under YNB.

The first thing that most people comment on is that all of the members of the group are tall with the average height being over 6′, which is quite tall for Korean men. They are also attractive and clean cut, but don’t think that that is all there is to them, because they are also talented. They have great vocal skills and are on point during performances, with sharp dance moves and good footwork, and I like how they have dance moves that fit the tempo of the songs. Sometimes groups work too hard to have amazing choreography to the point it can distract from the song itself.

KNK held their debut showcase in February 2016 at the Ilchi Art Hall and released their debut single, Knock a few days later in March. They went on to perform Knock at the 20th China Music Awards in April, which was their first official appearance outside of S.Korea. A digital single I Remember was released in May and then their first mini album  Awake and the MV for Back Again were released in June. Awake peaked at No. 14 on Billboard’s World Album Chart.

As with most groups they have had appearances on Weekly Idol and After School Club. KNK are also known for doing pretty amazing covers of TVXQ’s songs and for actually having character and personalities of their own. Each member is unique and has their own quirks and foibles, including one member who apparently needs to learn to take a towel with him when he showers.

Their first 3 songs have done quite well for a rookie group, and they have a lot of things going for them, so I hope they continue to do well in the future. I look forward to watching them grow as a group, and I’m sure with their height and good looks at least a couple of them will try out acting in the future.

You can see both Astro and KNK on the same episode of Weekly Idol and see not only the charms of each group, but how they act and interact with each other. Even with all the groups I like I always have a soft spot for the rookies who have to try so hard to be noticed among the numerous amazing idol groups out there, so if you have time please spend a few minutes finding a rookie group that you like so they can receive some love and support.

You may also enjoy Kpop Musings, Return of the 1990’s Kpop Groups?, Like Dance? Watch Kpop, and BIGBANG10 The Exhibition.

Photo credits to original owners. Please do not copy or use without permission or accreditation.