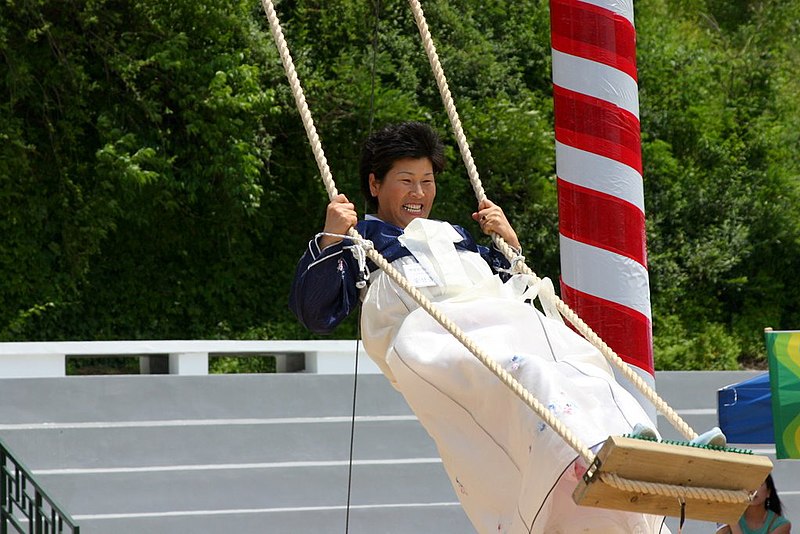 While watching our favorite sageuk (Korean Historical Dramas) we have no doubt seen, from time to time, the young women from good families swinging on tall rope swings. The ropes can be upwards of 20 feet long and the women swing standing up. As my regular readers know by now I’m often curious about the history and culture of some of the things I see when I watch Korean movies, dramas, and even variety shows, and these huge swings have caught my eye more than once. I’ve even seen them in a Folk Village when I was in Korea, but I was too much of a chicken to try it out. (Plus I think these were scaled down ones for children to use.)

From what I can find, it seems like the Northern Tribes passed the game onto the Tang Dynasty (AD 618 – AD 907) Chinese who introduced it to the Silla Kingdom. (57 BC -AD 935). The dates and timing are somewhat vague being dependant on oral tradition until there is an 11th century written report by Gwak Won, a Sung (AD 960 – AD 1297) envoy to Goryeo. (AD 918 – AD 1392). Gwak Won describes how the Goryeo people rode rope swings during the Dano Festival which is held on the 5th day of the 5th month.

By AD 1216 we can read about Choe Chungheon, a powerful military leader, holding a huge party during the 3 day Dano Festival, during which he held swing riding contests. It seems that both men and women rode the swings and winners received silver as their prizes. It wasn’t just prizes for how high you could swing, but also for tricks like stamping your feet or ringing a bell while swinging.

It was said that having such a large gathering of men and women together led to improper behaviour, but swing riding remained popular even though in AD 1296 a ban was imposed on the pastime.

At some point swing riding became a woman’s activity although the participants at major festivals were men. Women, kept behind walls of exclusion, took over swing riding as a supposedly healthy pastime, but it was more than that. Women often dressed in their best going out clothes and shoes, but would lift their skirts and tie a sash around their waists just as they would do for playing Neol ttwigi, the seesaw game. Both games were opportunities to show off a little and perhaps see and be seen over the high compound walls. Poets sung the praises of young women’s beauty and flushed faces after swinging, with one story even describing how a young nobleman fell in love with a girl on a swing.

Swinging remained firmly associated with the Dano Festival and since it was an exceptional festival in that it allowed women remarkable freedoms it is hardly surprising that rope swinging continued on as a popular woman’s pastime, even outside of the Festival and within their own walls.

There was a folk belief that swinging on Dano helped prevent mosquito bites and would protect women from the effects of the intense summer heat. I’m not sure that would work nowadays, but geune ttwigi is still a part of the folk heritage of Korea and can be seen at Festivals and Folk Villages.

If I see one of these giant swings on my upcoming trip I plan to gather up all my courage and see if I can swing without fear.

Please do not copy without permission and accreditation.