Posted on July 8, 2016 by kpopjacketlady

Just like a lot of people I was first introduced to this game through Korean variety shows and dramas. Alkkaggi belongs to the shove family of games along with such games as Carooms, Shuffleboard, Shove Ha’penny, and Tabletop Curling, which use one object to knock another out of play. The simplest member of this family of games is probably the bottletop game where you flick the bottletop to get it closest to the end of a table without falling over the edge. 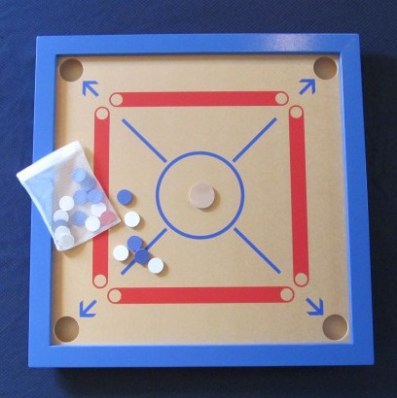 It is usually played on a Baduk, or Go, board, although in reality it can be played on any smooth surface. I have seen players use a Janggi (Korean Chess) board or even one they have made themselves. The surface just needs to be nice and smooth and have a grid pattern on it. A Baduk board is perfect for this with a 19 x 19 grid, however, most families won’t let anyone play Alkkagi using their good boards as flicked stones can mar the surface of a $300 to $1,000 board. Many people buy cheap Baduk boards to use to play Alkkagi, or make one for themselves.

On TV shows such as Idol Star a good board is usually used because it makes for good visuals and it’s not someone’s family board. High quality Baduk boards are kept and handed down generation to generation. They are also a good height and have a good solid feel so do not move during play.

Baduk, known as Go in Japan and the West, is a game of ancient Chinese origin and was first mentioned in Korea in the second century AD. It is a strategic game that equals and perhaps surpasses the complexity of chess and was considered a necessary accomplishment for young men of the upper class. It was taught and studied, as it still is in some places today. (You can get an undergraduate degree in Baduk studies at 2 Korean universities.) However, it isn’t really what you would consider a fun game, and at some unknown point in the past Alkkagi was invented, probably by children and young men fooling around with a Baduk board and pieces when adults weren’t present. Shove type games in other countries have been dated from the 15th century onwards so Alkkagi may be very old or a recent invention, we just don’t know. It has become increasingly popular as it is seen on TV more and more.

Once you have a board you need stones or badukdol. The number can vary but usually people play with 5 or 7 on each side. The stones can be made from a variety of materials such as black slate, glass, clamshells, ceramics, or even plastic. They need to be lens or double convex, which means don’t get the Chinese ones which are flat on one side. Ceramic stones seem to be the most popular choice in Korea.

Baduk, or Go, sets usually have 181 black stones and 180 white ones. The black stones are often stronger and you want to choose thick edged stones. Thin edged stones tend to glance off more easily rather than striking true. Stones can get damaged easily so it is probably best not to use a good set of stones. If you want to make and play Alkkagi you should look around in thrift stores, garage sales etc to see if you can find a partial set of stones, or you buy a complete set and sell off smaller batches of stones to your Alkkagi playing friends. The stones can chip and break so don’t play with stones which show a lot of wear because, although unlikely, chips or stones can fly upwards and hit the other player.

Each player places their stones onto their side of the board and then each player takes turns to flick one of their own stones so that it strikes one, or more, of their opponent’s stones and knocks it off the board. The player with the last stone on the board is the winner. The stones must be flicked and not pushed and there are many different styles of play. Niel, from the Kpop group Teen Top is an excellent player, and his flicks are very precise. A slightly different method of play can be seen when Onew from SHINee takes on Eunhyuk of Super Junior. House and local rules exist so discuss  which way you’re going to play before the game begins. I love playing this game but am really not a very good player.

If you have any questions or different methods of play please comment below.

Photo credits to me. Please do not copy or use without permission or accreditation.

22 Comments on “Alkkagi: A Korean Game.”