Posted on November 19, 2016 by kpopjacketlady

In Part 1 I talked about how games are often the backbone of many Korean Variety shows, with some games playing a recurring role. Running Man is the home of the name tag  game to the point it has become synonymous with the show itself.  Many games pop up randomly from time to time while yet others appear with some regularity. Quite a few games require little in the way of equipment and can be played at home or at the park.

The leg stretching team game requires little more than a starting line and a way to mark the final distance of each teams efforts. Each team must stretch their legs as wide apart as possible and line up toe to toe as shown in the photo above. The team who stretches the furthest wins. This sounds very simple, but since the first players must hold their legs stretched out until the whole team has formed up, it can be difficult. If players are not touching toe to toe they are eliminated from the game, or they must reform the line and a new measure taken. Players may balance themselves with their hands, or not, depending on ‘house’ rules. Multiple teams can play this game.

This next game doesn’t show up as often as I would like, but it is an easy game to play at home, and a lot of fun to watch. My favorite example is from 2PM who played this game in their PJs. It can be played with cookies or with slices of pickled radishes, and the aim of the game is to maneuver the cookie or pickle down from your forehead into your mouth just using your facial muscles and gravity. No hands allowed.

Butt wrestling or butt shove is a silly and fun game that require no equipment. Two people stand back to back with butts almost touching and when the whistle blows they must try to knock the other person off balance just by using their butts. House rules can determine if feet must be together or not. A wider stance leads to more stability for the players. 2 Days 1 Night has fun with this game as does the Kpop idol group UKiss. 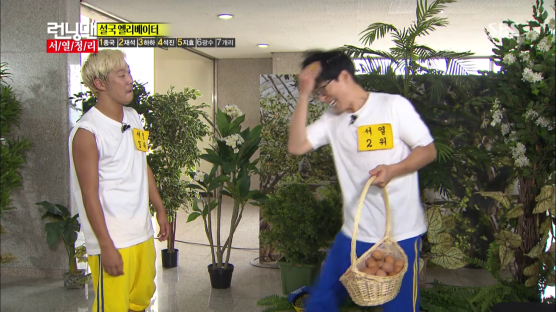 Egg roulette is a very simple, if potentially messy, game. All you need are a dozen eggs, 10 hard-boiled and 2 raw. This number can be changed depending on how many people are playing. Each player takes turns choosing an egg and ‘smashing’ it on their forehead. The person who chooses the raw egg loses. Players should be warned not to hit the egg onto their head with too much force and you should have clean up supplies handy. This game is not only popular on Korean shows, but you can also see it on American shows as well. 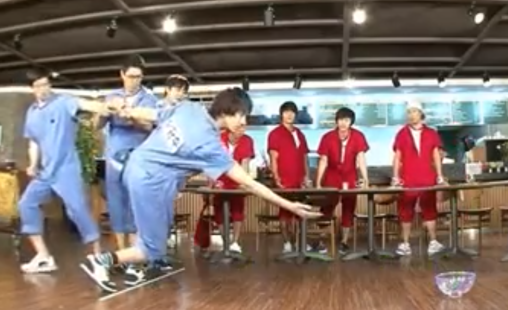 Another simple game is tossing something like a coin or even a bottle cap into a bowl. Bowls work better than buckets because the coin/bottle top is more likely to bounce out making the game harder. To make it easier you can fill the bowl part way with water. In Ancient Rome a similar game was played where small pebbles were tossed into a narrow top clay jar, so simple games like this have been around for thousands of years. Running Man players are well known for ‘bending’ or even breaking rules, so make sure to specify your ‘house’ rules before you begin to play.