Posted on November 1, 2016 by kpopjacketlady

One of the things that many fans of Korean Variety Shows, such as Running Man, 2 Days 1 Night and Infinite Challenge, love are the games. Games, challenges, contests or whatever you want to call them make up a large part of these shows content. Food and social interaction are also important and some games like Food Bingo can incorporate both those things. Celebrity guests and interesting locations add to the appeal too.

I have already written about some of the traditional games played on these shows, namely Yut, Ddakji,   Gonggi, Kai Bi Bo, Tuho, Alkkagi, and Jegi Chagi, but there are so many more. Quite a few are short quick games to choose who starts a longer game. Games like Kai Bi Bo or Odds and Evens are often the type of game many of us played on our school playgrounds to decide who would go first. Many games have regional variations and ‘house’ rules so make sure you’re all playing by the same rules.

Cham Cham Cham aka Di Bi Di Bi Dib is a popular game on variety shows and with idols alike. It is very simple, but surprisingly hard to win as instinctively our head will turn in the direction the opponent is pointing. Yoo Jae Suk often takes the game to a whole new level in Running Man and much humor ensues. The rules are quite straightforward. Two people stand, or sit, facing each other. A quick pre game of Kai Bi Bo or something similar might take place or one of the two players just decides to start first. Whoever starts first will chant Cham Cham Cham, or Di Bi Di Bi Dib, and then with their upheld hand, or sometimes some kind of prop, point right or left on the last Cham, or Dib. If their opponent’s head turns the same way as their hand then they win, if the opponent’s head turns the opposite way then the opponent wins. Most losers receive some kind of punishment, which can range from gentle to severe. There is also a version where the choices are up and down as well as left or right. This statistically gives the one choosing the direction a disadvantage and so works better for group play as opposed to 1 v 1. 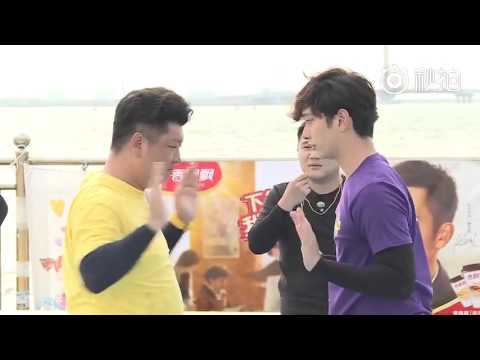 I’m not sure of the Korean name for this game, the US Boy Scouts call it the palm pushing game, but I think that maybe is just a descriptive name they’ve made up. In someways it is not totally a palm pushing game as your hands are meant to be more of a shove and release, your hands are not meant to stay in contact after the initial push/shove. Two players face each other with their toes about 2 shoe lengths apart from their opponent. Some rules say each opponents own feet must be together, which make the game much harder, or just a comfortable foot or so apart. The wider the stance the harder it is to knock someone off balance. Hands should start by being held about armpit to shoulder height as in the photo above. Each player is trying to knock the other off balance so that a foot moves out of place or the player loses balance and falls. Once the game starts no turns are taken, both players are watching and waiting for an opportunity to strike and the game is usually over quite quickly. Hands can be moved away from their starting position to evade the opponent’s strike, but palms must always be facing your opponent. To get the idea of the game it is best to watch a few examples. Please note that if you play boy v girl boobs might accidentally get touched if opponent overbalances forward. Also a hint is to keep you hands more to the sides than directly in front of you. 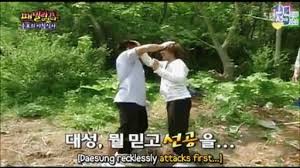 A similar game is where you push each other’s forehead, with the best ever example of this game being by Daesung from BigBang. It still one of the funniest things I’ve ever seen. 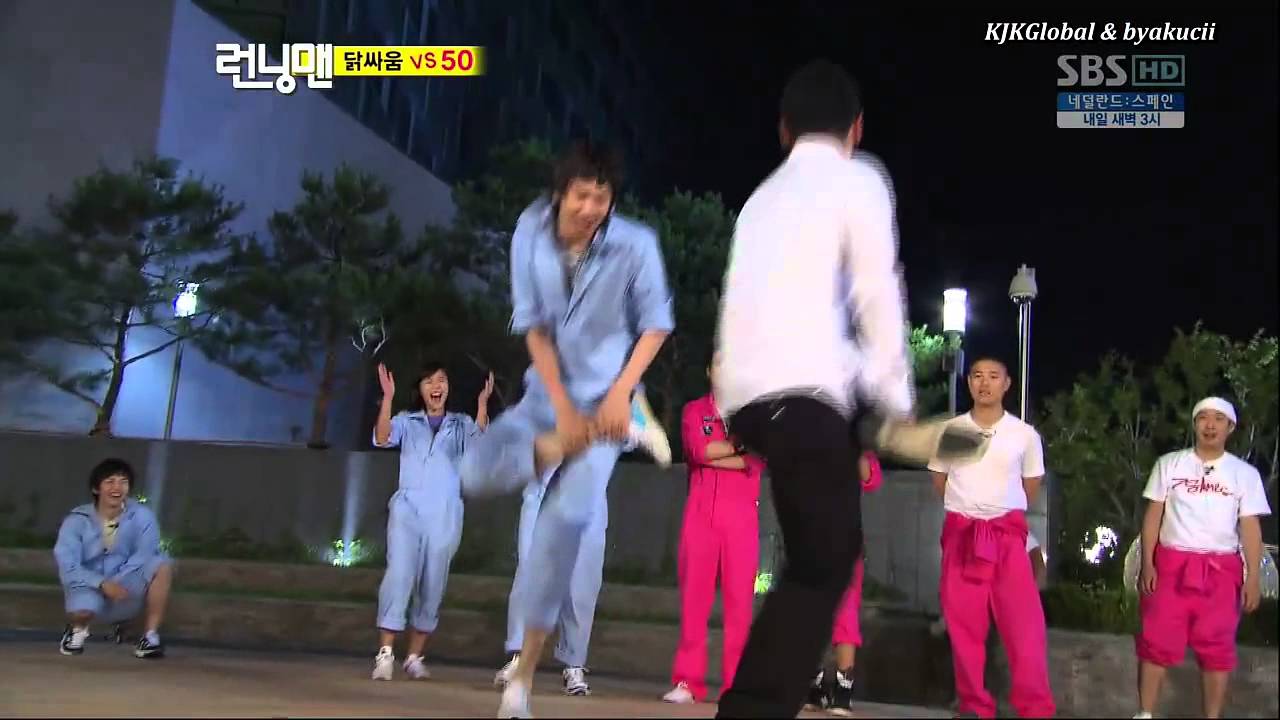 Another perennial favorite is the Chicken Fight Game, again more of a description than a name. This game requires flexibility and a great sense of balance. It also helps if you are quick to spot your opponent’s weaknesses. You can use strength, speed and strategy. Sometimes it is good to hit downward with your knee, or a strong player might try and lift his opponent off balance by striking upwards under the opponents knee. Usually there is some sort of boundary around where the game is played and knocking someone out of bounds is also a winning move. This game can be played one v one although it is often played as a team game. There are slightly different versions including one group version called, Protect the King.

There are so many more games that are played on Korean Variety Shows, that this will no doubt be an ongoing theme. If you have a favorite game you’d like me to write about in part 2, please let be know in the comments below.

First 2 sets of photos to me. All others photos credits to original owners.  Please do not copy or use without permission and accreditation.

You may also like part 2, part 3, and part 4 and Korean Variety Show Games: Lose And Face The Punishment.