The Humor In Mud: Idols and Celebrities At Play. 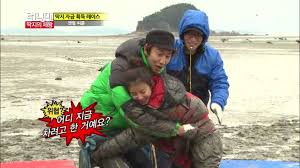 Mud can be found in many places such as mudflats, river edges, rice paddies, fields and gardens after the rain, and anywhere where water and soil come together. Mud is cool and wet and slimy and it oozes and squishes and makes lovely gloppy, gloopy, sucking noises as you walk through it. It is a substance that attracts the child in many of us and can still make us smile when we watch others play in it. Many Korean variety shows have taken advantage of this and place show members in mud to play games and face challenges. The best mud for this is often found in mudflats.

Mudflats are large stretches of muddy land that are found at low tide when the sea recedes, sometimes leaving upwards of 2 miles of mud before you get to the sea itself. They are also sometimes called tidal flats, because they only exist as long as the tide is out. Mudflats are important feeding areas for birds, especially migratory ones, and team with life, including many crabs, clams, and crustaceans that have food value to other animals and humans alike. Salt farms are often found on mudflats and are an eco friendly use. In the past mudflats were often seen as useless and were dredged and turned into agricultural land. In some parts of Asia 65% of mudflats have been destroyed in the past 50 years. Fortunately S. Korea has seen their value and is taking steps to preserve theirs.

S. Korea is home to some of the largest mudflats in the world and they often appear prominently in Korean variety shows, where they elicit much laughter and joy. Some of my favorite funny moments have been watching celebrities play in mud. One of the first Korean variety shows I watched was Family Outing Season 1. It was full of funny games and comedy, but it also combined aspects of traditional culture and practices. Episode 7 had the ‘family’ along with guests GDragon of BigBang fame, and actor Shin Sung Rok, who had to fish using traditional methods in the shallow waters at the edge of some mudflats. It wasn’t really a mud challenge per se but for me it was a precursor of things to come. I never liked Season 2 and my variety show watching was somewhat sporadic until Running Man. I began watching it because it had some members of Family Outing in the cast, but I stayed because it was fun to watch. I would actually laugh out loud at some episodes which is somewhat rare for me. Episode 115 has the team playing games on the mudflats….well actually they spend a lot of time in them if you catch my meaning. Unfortunately not all of the early episodes have been subbed in full on Youtube, so to watch the whole episodes you may have to use a site such another streaming service.

Running man has often played in mud in general, which means that when mudflats weren’t available they used flooded rice paddies, muddy fields, and even specially made mud pools. Mud appears in numerous episodes including episodes 163, 209, 213, 220, 233, 236, 254, and 302. Of these episode 163, which featured members of BigBang, is probably my favorite. The fact that big name celebrities are willing to play such strenuous and dirty games is a wonder to me and I enjoy seeing a more natural side of them in that I think their true character slips out when they’re in the middle of a game. Poor GDragon put in a lot of effort, but being on the same team as Yoo Jae Suk soon meant that, for his team, the game degenerated into farce. All the players looked absolutely exhausted by the end of the game, and I was quite tired from how much I laughed. This was one of the best and funniest games ever played on Running Man.

Episode 254, with Girl’s Generation as guests, probably comes in second on the laugh scale for mud episodes. They really entered into the spirit of the day and forwent their usually sexy and beautiful screen personas. They were fairly determined in all the games, not minding the mud and really getting down and dirty in the sock game in particular. Not being a real fan of Girl’s Generation I was impressed with how hard they played. There are plenty of laughs in this episode and it is worth watching.

Running Man is not the only Korean variety show to utilize mud. Episode 592 of 2 Days 1 Night is particularly funny, and there are other 2 Day 1 Night episodes where they play games or challenges in the mud. In fact it would probably be hard to find an outdoors Korean variety show that hasn’t played in the mud at some point. Play and deliberate humor however, are not the only focus, as you can also come across variety, and reality, shows that film the catching of mud creatures as these often provide humorous moments as people come across the weird and strange creature that can be caught in the mud.  Invincible Youth, The Return of Superman, Roommates, and  Let’s Go Dream Team, have all had episodes that feature mud.

Years ago when BAP were still new they went to the beach mudflats in Killing Camp, episode 2, which is still funny to watch.

Korean people do go to mudflats to catch things, enjoy the scenery, and play games. There is also a big mud festival every year in Boryeong where Koreans and tourists alike play games and enjoy all the benefits of mud. (It is good for your skin and many spas and beauty salons sell mud treatments.) So if you can’t be where you can enjoy some mud, sit back and laugh at some of the Korean style mud games.

You may also enjoy Korean Salt, and Korean Games, and where to find out more about them.

6 Comments on “The Humor In Mud: Idols and Celebrities At Play.”