Posted on October 6, 2016 by kpopjacketlady 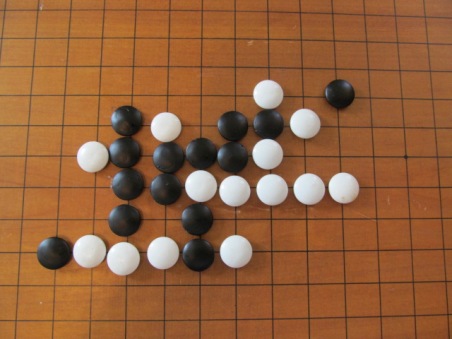 As with so many traditional games, Omok is known by different names, and often played with slightly different rules, in different countries. Many people may be familiar with it as Gomoku in Japan, or even as Gobang or Kakugo. It is usually played on a Baduk/Go/Wei-ch’i board, (a 19 x 19 grid) although any board with a grid pattern can be used. Since no piece is moved once it is played on the board, it is even possible to play on graph paper using a pencil to mark x’s or o’s.

It is thought to have originated in China, although some people posit it is of Japanese origin. Since it is usually played on a Baduk board, and that the original ancestor game of Wei-ch’i developed in China, a Chinese origin seems likely. It is possible, however, that similar games developed in different places and at different times. We know that alignment games in the same family were played in other ancient cultures such as Ancient Rome. The tic-tac-toe family is large and widespread. Wei-ch’i was first mentioned in Chinese writings in 625 BCE, in Korean writings in the 2nd century AD, and in Japanese around 500 AD, changing its name to suit the local culture as it travelled.

Omok may very well have travelled the same route, although some say it arrived directly from China to Japan around 700 AD. It may indeed have skipped Korea, as it doesn’t appear in any Korean writings until the late 19th century. However considering the long history of trade and diplomacy between all three countries, I believe, although not popular enough to leave written accounts, it was probably played in Korea before then. Nowadays it is played in Korea, both on the Baduk board and on the computer. (See BTS play.) It is a simple strategy game to learn, but requires complex thought processes to win. Some see it as a stepping stone to learning to play Baduk, although there are some major differences between the two games.

Omok isn’t played as much on Korean variety shows as some other games, but it did show up on episodes 72 and 116 of season 3 of 2 Days 1 Night. It also was played by 3 members of Big Bang on episode 219 of the Korean Variety Show Home Alone.

The goal of Omok is to form lines of 5 in a row, which can be vertical, horizontal, or diagonal. It is in many ways very similar to Connect 4, however play is on the intersection points, not inside the squares.

Like most games in the tic-tac-toe family the advantage is to the player who places the first stone. In Omok black goes first, and over time different rules have been developed to try and make the game more fair. The traditional method of play often ends in a draw for experienced players, which has led to there being a lot of variations in play and house rules, so be sure you check with your opponent before you begin. There is a modern variant of Gomoku that is played at a world tournament level, although those rules differ slightly from what you are likely to find played in Korea.

Photo credits me. Please do not copy or use without permission and accreditation.

3 Comments on “Omok: A Korean Game of Five Stones.”