Posted on October 20, 2016 by kpopjacketlady

The Korean Dragon Palace Temple, which is more commonly called Haedong Yonggungsa Temple is known as being one of the most striking Buddhist temples in Korea. Much of this may have to do with its amazing location on the edge of the coastline of the East Sea. It is particularly beautiful when the first rays of the rising sun bring the amazing colors of all the paintwork to vibrant life. It is still, however, beautiful at any time you might chance to visit. 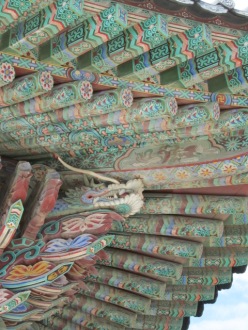 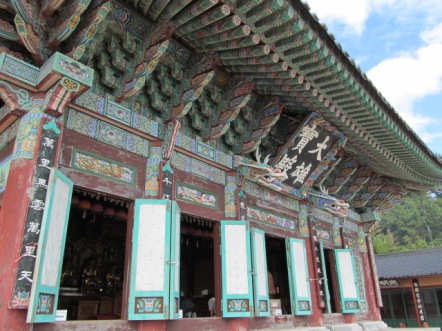 It was first built in 1376 by a Buddhist teacher known as Naong who was a consultant to King Gongmin during the Goryeo Dynasty.It was known as Bomun Temple at that time. Unfortunately parts of it were destroyed by fire during the Japanese invasions of the 16th century. Some reconstruction was begun in the 1930’s, but the Main sanctuary wasn’t built/reconstructed until the 1970’s. The reconstructions were carried out with much care using traditional colors and design.

The 108 steps down symbolize the 108 agonies and earthly desires of Buddhism. They also may prove difficult for those in poor health. Coming back up them made me wish I had exercised more.

The temple motto states that “at least one of your wishes will be answered here through your heartfelt prayer,” and along with the tourists you will see many people who have come here to pray.

The temple is situated at a place of great harmony between the sea, the dragon, and the Great Goddess Buddha of mercy, known as Gwanseumbosal in Korean, She is said to live a solitary life next to the sea and appears on the back of a dragon.

Although on the far NE side of Busan it is possible to get there using the metro and then a bus. Most tour companies include a visit on their tours of Busan, so to avoid the crowds get there early. Daybreak is a perfect time to view the temple although many of the entry area vendors might not be open until your return. We had some really tasty freshly made street food type snacks and sweets, but I was too busy eating to take photos.

You may also enjoy Bongeunsa Temple, The Stone Men of Jeju Island, and Spirit Garden.

Photo credits to me. Please do not copy or use without permission and accreditation.