Posted on February 10, 2018 by kpopjacketlady

Bulguksa temple is classified by the Korean Government as “historic and scenic site no 1” which in many ways means that if you visit only one site in Korea it should be this one. It is also an UNESCO World Heritage site and contains a number of Korean National Treasures. Unfortunately it isn’t close to Seoul so most foreign tourists never get to see it.

We finally made it on our third trip to Korea as a long day trip from Seoul. We took the KTX to Gyeongju and then our friend Ken rented a car for the day. It is possible to get a bus from the train station, or if there’s a group of you, rent a taxi for the day. 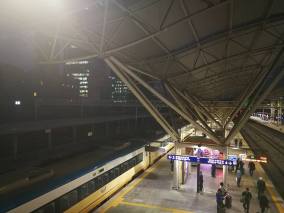 We got up super early and watched the sun rise while en route. We have also learned to pick up breakfast at the train station and then eat on the train. Most of the regular passengers around us were also eating their breakfasts. This made us feel part of ‘the group’ as we were all eating at the same time.

We got to Bulguksa quite early and had a little look around before entering and finding our English speaking guide. As you can see from the map the temple complex is quite large and I do recommend a guide as there are very few informational signs once at the temple.

It is a bit of a walk from this entrance up the mountain to the temple, but it is paved and mostly a gentle incline. 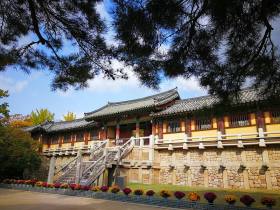 We checked in to let our guide know we were there and then took a look around the immediate area. No matter how we tried no photograph could truly capture how beautiful this area was.

Originally the temple was built in 528 CE. It was renamed and rebuilt in 751-774 during the Silla period to more like what you see today. It has had a turbulent history and was even set on fire during the Japanese 16th century invasions. It has been renovated, repaired and restored many times, but always using the same techniques and materials, so it is still very much what it originally looked like. There are still some buildings that were destroyed in the Korean War that have not been rebuilt.

The entrance area showcases four ‘bridges’ and two gates. The area where we were walking around was originally a pond and water flowed under these steps. The ‘bridges’ are actually the steps you see in the above photos. Cheongungyo (Blue Cloud Bridge) and Baegungyo (White Cloud Bridge) lead up to Jahamun Gate (Golden Purple Gate). All three were built around 750 CE and so are well over a thousand years old. People are no longer allowed to walk up them.

Ken encouraged us to drink the mountain spring water as we had a bit of a walk ahead of us. If you don’t don’t want to drink the water be sure to take some bottled water with you. 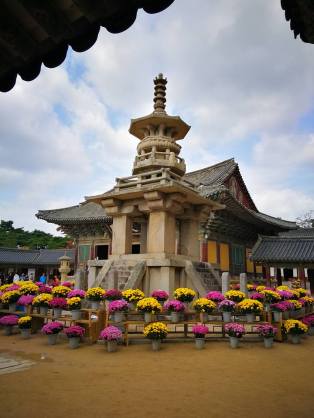 Our guide was ready and soon we headed around the side and into one of the large courtyards.  Our guide was a practicing Buddhist and was an encyclopedia of interesting information. She really wanted to make sure we understood the basic concepts of Buddhism as well as the history of the temple. She was amazing, at no time did I feel she was trying to convert anyone, she just wanted to us inform us. She told fun and engaging stories and happily answered even our most off the wall questions. Even our Korean friend said he’d learned a lot.

The first thing you notice is the Dabatop Pagoda, built around 750 CE, and National Treasure no. 20. It is also the image on the 10 won coin. 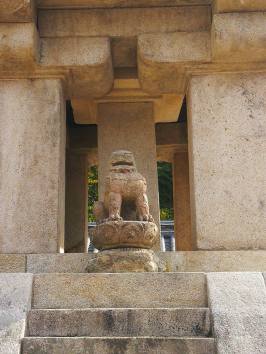 The pagoda once had four lions standing guard, one is now in a British Museum and no one knows what happened to the other two, but this beat up ugly guy has doing his best for well over a thousand years.

There is a second pagoda in the courtyard built at around the same time but in a different style. It is the Seokgatap pagoda and is National Treasure no. 21.

The courtyard was full of beautiful and interesting things, while the buildings were carved and painted in a spectacular fashion. 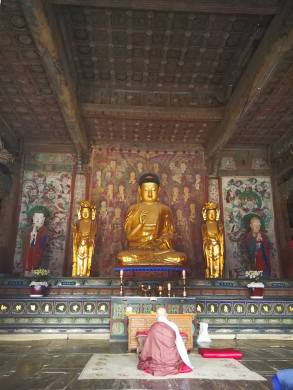 We arrived in time to see a monk give this Buddha his breakfast. Bulguksa is the head temple of the Jogye Order of Korean Buddhism and is still a working temple.

One of the loveliest temples to stroll around we kept coming across so many amazing and photogenic spots. Our guide was extremely patient with us as we kept exclaiming about the temple’s beauty. 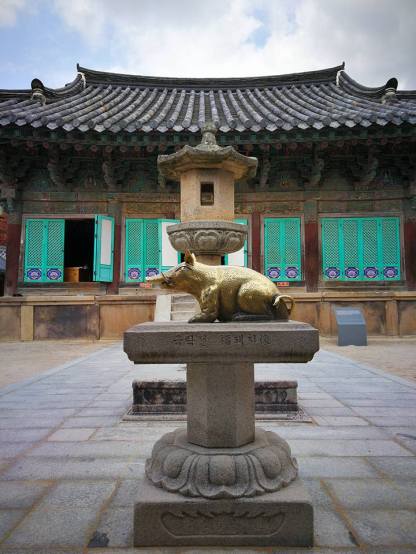 One of the courtyards holds a lucky pig statue which we all had to rub for good luck. 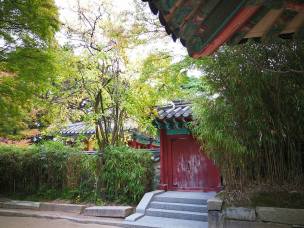 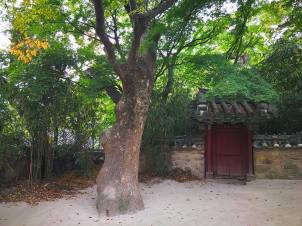 Spread out over the mountainside with many courtyards on different levels it was easy to come across hidden areas.

Up towards the top of the temple complex we found an area where stones are stacked upon each other.

This is a way of asking for good wishes, or luck. Elizabeth and I have stacked stones at many temples, mostly as a form of thanks that our wishes to travel have been granted. (Do not knock down someone else’s stack to make your own, that would be unlucky.)

Just past here in the next courtyard was the Sarira Stupa, basically a reliquary, a place to house the remains of honored priests or royalty. 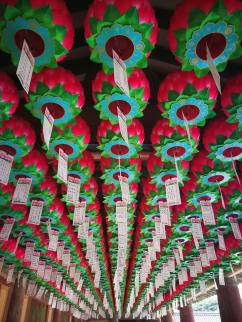 Wherever we walked there was more to see and admire.

At many tourists sites young Koreans have spoken with Elizabeth and wanted ‘selfies’, or ‘selcas’ (self-cameras). Here was no different.

Bulguksa is a wonderful place to visit and is very popular with Korean tourists and tour companies. The crowds tend to appear in the peak Spring and Fall seasons when the mountainside is particularly colorful. Getting there early in the day is the best plan.

Bulguksa Temple was only our first stop on a very full day in Gyeongju, so please keep an eye out for future posts.

Have a great day everyone, and be sure to visit Bulguksa Temple on your next visit to Korea.

You may also enjoy Haedong Yonggungsa Temple, (near Busan),  Bongeunsa Temple:Seoul,  and Juldarigi: An Extreme Form Of Korean Tug Of War.

Note. When you get an english speaking guide often the group is many up of many nationalities as English is the default language for those not speaking Korean. (Or Chinese, or Japanese, the other two languages along with English that most tourist spots have tours in.)

Note. There is an area of restaurants and shops further down the mountain. Toilets are located near the parking lots, with one toilet block at the temple.

Note. At some tourist spots in Seoul it is actually part of the local school’s field trip requirements to get a photograph with a foreigner.

Please do not copy or use without permission and accreditation. All photo credits to Elizabeth Marzec.

3 Comments on “Bulguksa Temple: In Photos.”