After a harrowing drive north through yet another mega Texas storm I checked into my hotel across the street from the Fort Worth Convention Center Arena around mid afternoon. There were a lot of people outside, some in lines, and some just hanging out, but nothing like the crowds for BTS. The city didn’t seem to have as much planned out for the Black Pink fans as they had for BTS. (No port-a-potties, or blocking off the street or any of the other things they did for BTS.) 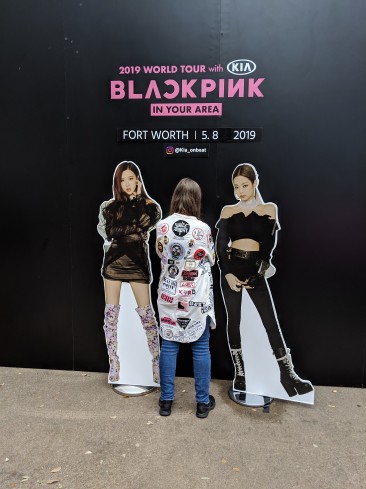 My favorite Fort Worth bartender had a prime spot at the bar waiting for me so I could watch all the goings on while I waited for my friends to arrive at the venue. Not too much later and I was out the door joining in and mingling with the crowds. Because of Black Pink’s commercial relationship with Kia there were a number of photo ops for fans with cut out figures etc. You have to look really closely to spot the Black Pink patch on the Kpopjacket.

Krunk was also out and about and there were also some ‘cover’ dancers performing to a decent sized crowd. Not being able to get close I can count myself fortunate to have hugged a large sized Krunk while in Korea.

Confusion seemed to have been a byword for this concert. Firstly there was the fiasco over the ticket sales and the adding of another date, to then abruptly cancel the second date. Fans scrambled to buy, or sell, tickets as information swirled about the interwebs. Tickets were selling for prices in the many hundreds of dollars and as low as $19 at one point. Then on the day of the concert the information for those lining up to get in with seated tickets was worthless. One long line formed over the course of the day, but no one told those fans there were actually 8 lines open. This caused some fans to barely make it into the arena in time for the start of the show was actually a little delayed. Staff rushed to get last minute fans in, only to leave no one helping direct fans to their seats. The ushers showed up right when the concert started.

People in line can be the best. I hung out with a great bunch and also got to speak with a few people I’d met at previous concerts. One lovely young lady gifted me with some fan bracelets she had made which was sweet of her. (Thank you if you read this.)

Once inside we all split up as we had seats dotted all around the venue. Thanks to a friend I had a good seat. Even so unfortunately my camera wasn’t really up to the occasion, particularly with the very busy and glaring back screens they used. I understand them wanting to wow the audience, but I felt it would have been better if instead of competing with Black Pink for our attention they could have enhanced the girls in a better way. Again my apologies for the poor quality photos. 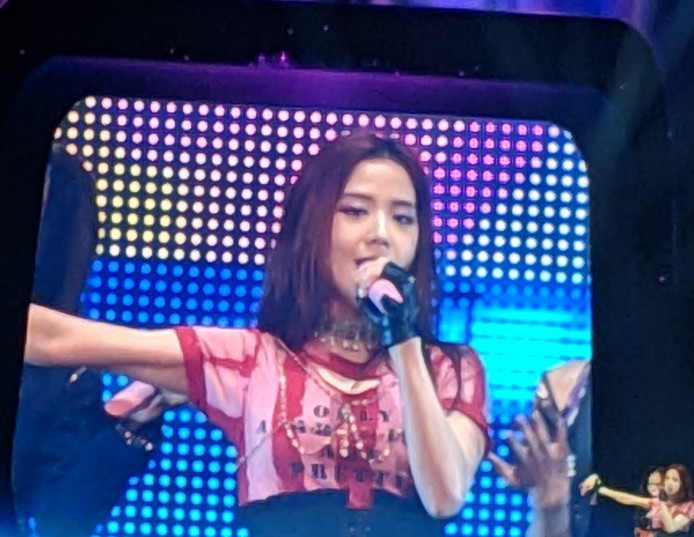 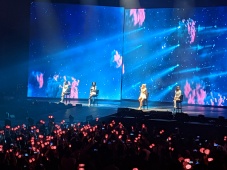 The roars from the crowd as Black Pink appeared on stage were thunderous, almost deafening. Made up of four young ladies, Jisoo, Jennie, Rose, and Lisa, each with a diverse background Black Pink debuted in August 2016 with hits such as Whistle and Boombayah rising to the top of various charts almost immediately. Being the first girl group to debut from YG Entertainment in the 6 years after 2NE1’s debut there were unflattering comparisons on the one hand and high expectations on the other.

I think between group and solo songs they performed about 20 songs, with all their top hits featuring prominently. They kicked off the night with a powerful rendition of Ddu Du Ddu Du, and mostly kept the momentum going. All four of them appeared confident and in charge of the stage, although it was somewhat unfortunate that they often looked dwarfed by the shear size and emptiness of it. Particularly when they were performing their solos I wondered what their set/stage designer had been thinking. The only saving graces were the large screens, and of course the decent sound system which allowed their voices to wow the crowd. The vocal and happy crowd also did a lot to keep the excitement at a peak level.

When they came up to the ancillary stage it allowed me, and many others, to get a better look at them and really hyped up the crowd. All four of them are remarkably pretty as well as being talented and when they spoke the audience hung on every word. With at least 2 of them being fluent English speakers it was easy for them to interact with their fans. (Blinks)

One of the highlights for me was catching their more intimate and candid moments on the big screen so I could see the ‘real’ them. 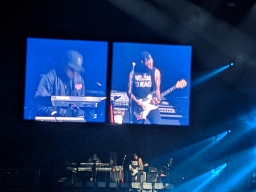 One of the downsides was the kinda tacky commercial they ran between sets for Kia. With most Kpop groups coming up with interesting, unique, or even just really cutesy videos to fill the time between sets, Black Pink fell down in this area. The Kia advertisement just wasn’t that good, except perhaps for the last second or two, which had a cute visual at the end. However, their choice to allow the live band to have one intermission to showcase their skills was a good one. They really kept the crowd pumped up and enjoying the music.

Another favorite part was at the end when it really seemed they didn’t want to leave the stage. They sat down and chatted for a bit which was wonderful……and cute.

They seemed to be happy with all their gifts perhaps particularly their cowboy hats. 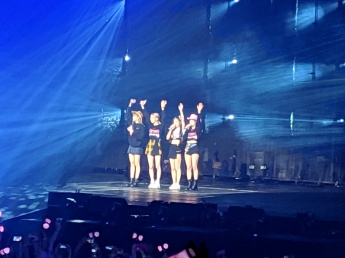 When the final farewell bow was taken they slowly sank beneath the stage, leaving the crowd happy and exhausted. Black Pink put on a solid performance and wowed their US fans. Their promise to return was met with joy and a little scepticism as we all know just who makes those decisions. But we were so very happy that we had seen them here in Fort Worth and that their whole tour was a success, and we’ll keep our fingers crossed their have a bright and happy future and come back and see us real soon.

You may also enjoy A Look At Some Of My Favorite Dance Practice MVs   and  The Beauty Of Korea.

Please do not copy or use without permission and accreditation. All photo credits to Debora Marzec.