2019 has already been a huge year for Kpop in the US, more tours, more groups, more stops, and bigger expenses for fans. But that has left fans with hard choices to make. Very few of us have the time, money and transportation to see them all, although a lot of fans really do try. ( I’ve meet fans who follow their favorite groups to every stop on the tour, and others who go to every concert within driving distance of where they live, but the regular fan nowadays often has to pick and choose. )

Having managed to get front row at VAV’s Dallas concert, I knew that good tickets for NCT 127 were going to be harder to get and indeed I ended up a fairly long way back. That’s not to say the view of the stage wasn’t bad, just that they were tiny and to see facial expressions I had to watch the big screen for much of the time. Maybe that’s why it took me a little while to really get into the concert.

I had been looking forward to a NCT USA tour for a long time and particularly since I saw them perform at the Busan One Asia concert in 2017 where they were probably the most dynamic act of the evening and one of my favorites. So even I was surprised that I wasn’t ‘wowed’ from the moment they came on stage. It wasn’t really that there was anything lacking in their performance, in fact far from it. Their first songs were polished and their performances energetic and professional. Their dancing was on point and their singing and rapping too. Everyone around me was so happy, excited and cheering and screaming like crazy. But for me there was just a little something lacking for the first part of the evening. I guess for me they lacked that extra ‘spark’ that captures every iota of one’s attention. That tug on your senses that just pulls you into a world of their making. 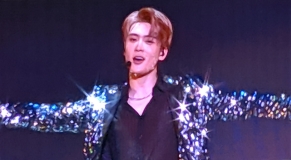 Fortunately as the evening progressed I felt both myself and them get more in sync and into the rhythm and feel of the evening. Towards the end of the evening a couple of the boys commented that they hadn’t been in peak condition and they thanked the audience for giving them strength. So maybe that was what I was sensing. I also noticed that as the show progressed the camaraderie between them seemed to become more relaxed and natural which is always an aspect of Kpop that I enjoy. The brotherhood and friendship between members has an appeal and charm not often seen on the usual American concert stage.

The venue, the Smart Financial Center in Sugar Land just outside of Houston, is large and somewhat cavernous but the color changing light-sticks, the vocal and appreciative crowd  and the better than average Kpop concert sound system soon made it party city USA. The audience were loud, raucous, and so very excited to be there. I could see almost everyone stood up and waving their light-sticks while so many were dancing and singing along. The roars from the crowd would swell and recede like the ocean as certain songs were played or particular biases were featured on the big screen. And like the ocean there was always a constant underlying sound from the watchers. If the sound of happiness could be bottled that’s probably what it would sound like.

They performed their most popular songs as well as some new ones and mixed up the evening between hard rhythm thumping athems and slower tempo ballards, which is when you really realize just how talented each group member really is. One of my favorite songs was probably when Johnny played a keyboard solo that segued into Regular. At this point they had my full attention as they managed to make putting on their jackets as sexy as heck.

I was hoping for a little bit more pole dancing type action when I saw the metal framework appear on stage for Wake Up, but it was used more for climbing and dramatically posing than anything risque. They also used it for Baby Don’t Like It which was  notable for a couple of ‘skinship’ moments which drew loud cheers and screams. Still a very unique and interesting stage prop and they used it to good effect. 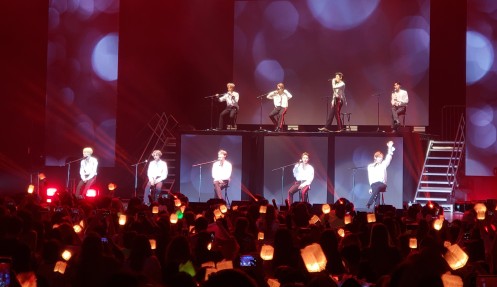 Along with the dynamic songs for which they may be better known I enjoyed the slower ode to their fans, “you are my” Angel which was a pleasant lyrical interlude.

Some other favorite bits were the solid choices for video ‘fillers’, particularly the light hearted ‘dance battle’ that took place in the past and the MV for Highway to Heaven. Highway to Heaven was one of the yet to be officially released songs which they have been showcasing this tour. If you haven’t heard it yet you are in for a treat on May 24th.

I also enjoyed the times they spent between sets speaking with us. It was then, even after seeing them being so professional and masculine with their power songs like Cherry Bomb or Chain that one could see that they are still young in so many ways. Being a mixed nationality group I wasn’t surprised at the ones speaking English, but I loved the charm of the native Korean, and Japanese, speakers as they did their best to get their thoughts across to their fans. (NCTzens)  Although a translator was used from time to time it was easy to see and feel the members earnest desire to communicate with us on a personal level.

It seems from their stories that they enjoyed Houston and were able to get out to the Zoo and the park. Some fans were lucky to spot them while they were out and about and get photos with them. We also heard that they ate a lot of food and apart from Yuta complaining a little about the price he had to pay, ( his turn ) they all said they enjoyed it. More than one also said that they hoped/planned to come back to Texas, which is always good to hear.

None NCT 127 related I also enjoyed the pre concert camaraderie of the fans waiting outside the venue on a very hot day, the previous concert buddies who stopped by to say hi and the new friends I met in line. There’s a special feel to being a Kpop fan and on the whole they are a very inclusive and welcoming group.

On that note I’ll finish up for now and wish everyone a great day.

Please do not copy or use without permission and accreditation. All photo credits to original owners. Photo credits for photos 2,5,6,7,9 and 10 to Raquel Gonzales who kindly let me use some of her photos because my phone acted up on me and ‘lost’ all but a couple from the hundreds I took.  (photo credits 1, 3, 4, & 8 to me.)

You may also enjoy Ateez: The Expedition Tour in Dallas and The Unique Faces Of Kpop.