There are five main palaces in Seoul which are all worth visiting, with Gyeongbokgung being the most popular. However, like King Seongjong (ruled 1469 CE- 1494 CE ) I have a great fondness for Changdeokgung Palace. He said “Although Gyeongbokgung is magnificent and splendid, the perfect location in this city is really Changdeokgung.”

Built within the guidelines of Pungsu-jiri-seol a geomancy system similar to the Chinese Feng Shui it really blends in with the surrounding landscape with many of the buildings nestled among trees. We have visited in both Spring and Fall so the photographs reflect both seasons.

The Palace was constructed on the orders of King Taejong ( ruled 1400 CE – 1418 CE ) as a secondary palace. It proved so popular that at times ( 1610 CE – 1868 CE ) it became the principal royal residence. One of the big attractions is Huwon, the secret garden located behind the palace and abutting the lower slopes of Ungbong Peak of Mount Bugaksan. To enter Huwon you need a separate timed ticket.

People waiting for their timed entry to Huwon after having already got their ticket. You can buy a ticket online or on site.

Tickets do occasionally sell out.

Changdeok Palace has multiple buildings of interest, including some National Treasures. It is also a World Heritage Site.

The Geumcheongyo Bridge is the oldest extant bridge in Seoul and was built in 1411 CE. many people cross it without realizing its age and importance. You can see it in the foreground of the above photo.

Injeongjeon Hall, basically the throne room, was first built in 1405 CE , burnt down during the Japanese Invasions of the 16th century, rebuilt in 1610. then it burned again in 1804 CE and was rebuilt yet again. 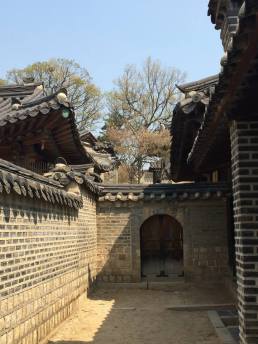 However, one of the reasons I like Changdeokgung so much are all the smaller buildings with their hidden spaces and beautiful walls and gates.

Just as these kids on a school field trip have found a place to hide I can imagine people having done so for centuries before them.

and trees in bloom.

Changdeokgung Palace in well worth visiting at any season, but Spring and Fall are the best times.

You may also enjoy reading Gyeongju: Why you should visit on your next trip to Korea,  Yongyeon Pond: In Photos and Horseback Archery In Korea.

Please do not copy or use without permission and accreditation. All photo credits to Elizabeth and Debora Marzec.

← Huwon: The Secret Garden Of Changdeokgung Palace.
The Kpopjacket: In Photos. →