Posted on November 26, 2016 by kpopjacketlady

Back when I started writing about Kpop I planned to write a weekly series on disbanded groups, but soon realized that it was too sad a project and it fell by the wayside. Well today I’m writing once more about a disbanded group, and it is the saddest post I’ve written so far. 2NE1 an iconic and extremely talented group of ladies has called it quits as a group. In many ways it wasn’t a complete shock to their fans as there had been hints, rumors, and an announcement about Minzy not renewing her contract, but to hear the news officially from YG Entertainment hit hard. Many fans have expressed their sorrow and grief online, to the extent that the break up is trending on Facebook, with over 110,000 people talking about it. It was even mentioned on a local radio station in San Antonio which I’m pretty sure has never played anything Kpop except Gangnam Style by Psy.

A sister group to BigBang at YG Entertainment 2NE1 always stood out from the crowd of look alike girl Kpop groups, both visually and musically. They had a unique style, somewhat edgy and even when young projected a strong feminine image.  Even in the beginning (2009) with the cutesy Lollipop, a song created to promote a LG Cyon cell phone, you could see and hear their talent. Although not an official debut song Lollipop hit no.1 on various charts and was very popular.

Their official debut was with Fire which was released with 2 MV’s at the same time, a ‘street‘ version and a ‘space‘ one. It is fun to see how young they were and how skinny CL was. Lots of great songs followed, with some of my personal favorites being, I Am The Best, Come Back Home, and Lonely.

Over the years the awards for 2NE1 were many and varied, but perhaps all one has to say is that 2NE1 has won the most grand awards, for a female artist, in the history of MAMA  (Mnet Asian Music Awards) with 4 wins (2 Song of the Years, 1 Album of the Year and 1 Artist of the Year). 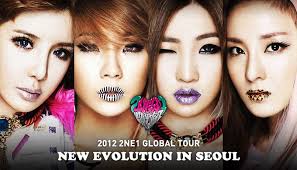 2NE1 had a huge and loyal fandom, most of whom will be sad and disheartened today, but it seems as though the breakup was not because of personal issues within the group, but more from the fact that each member now sees a better future outside of 2NE1. Remember that when they started out CL and Minzy were still quite young, in fact CL is the age now that Dara and Bom were when 2NE1 debuted. As people grow older so do their thoughts and views on life. Minzy didn’t renew her contract with YG back in April and has said she wants to “work even harder to return before you all with an improved and more honest version of myself”. CL wants to focus on being a solo artist and has just held a successful tour in the USA, while Dara wants to work on her acting, and that just leaves an uncertain future for Bom. Bom really never managed to get past the so called drug scandal, she was never officially charged with anything, and I’m really not sure if it is in her best interests to stay in Korea if she wants to continue singing. I really feel for her and my most heartfelt wish for her is that she finds something, or someone, to make her happy.

I wish all of them well in their future endeavors and maybe somewhere down the line, they’ll come back together for a 10, 15, or 20 year reunion like Sechs Kies and some of the other 1990’s groups. In the meanwhile I, like many other fans, will be marathon listening to 2NE1 for the next few days.

I usually end with ‘have a great day everyone’ but realize that today that might not be possible, so instead I wish you the best day it is possible to have under the circumstances.

You may also be interested in +Hello Bi+ches+,  Fare thee well: LC9,  Evol, and Led Apple.