Each week I’ll mention a kpop group who, for one reason or another, are no longer together, some because really they weren’t good enough, others because of tragedy, internal bickering, or contract issues. 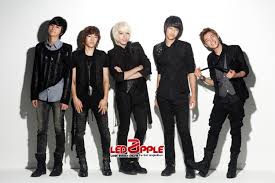 A group that couldn’t quite seem to find their niche and ended up with definitions like ‘hybrid band’ or ‘pop band’ when in a way they were both, and neither. They played instruments so they were a band, but also danced and sang so were they an idol group? This seemed to confuse people and may have led to some of the group’s difficulties. They were a 5 member band, but sometimes they weren’t, and over the course of their existence they had a total of maybe 13 people who were members at one time or another. The leadership also changed quite frequently, which can’t have been easy on any of the members.

LED Apple debuted in Oct. 2010, changed their name to LedT in Aug. 2015, and finally disbanded in March of 2016. As LedT they were down to only 3 members. They were under the Starkim Entertainment label and released a number of songs, and they even had tours in Europe and Japan. Their fanclub was known as LEDA.

Some of their songs were fairly bright and had musical show overtones which made them catchy and singable, others were darker and more intense, but somehow they never quite made the big time. Whether it was the fault of inadequate management or personality problems which caused the group to be so unstable I don’t know, but it is a loss to kpop when it loses some of its more unique groups. I guess their time was up.

I wish all the members good luck in the future and that they succeed in whatever they decide to do next.

← Too Many Zucchini…Time to make Kimchi.
Over 800 Hours of Work; The Kpop Jacket. →