Yeah, that’s right. San Antonio finally had genuine Korean Hip Hop artists perform in our fair city. Mad Clown and San E may not have realized it when they agreed to have San Antonio as a tour stop, but they were and from now on always will be the ‘first’ with us. And you know what? All future Kpop/Khiphop performers have a tough act to follow. It was one of the most fun concerts I’ve ever been to, and you know I’ve been to a lot. (Actually I must be on a roll, because the past 3 concerts I’ve attended have all been fantastic.)

The lead up to the concert was a little less than encouraging. A huge line of severe thunderstorms pushed through the city mid afternoon, making driving hazardous. Lighting streaked across the sky and the thunder shook windows, radar screens were full of red and orange as storm cells intensified. For the first time I actually considered the possibility of not going to a concert. Fortunately the worst passed by just as I headed out the door. Dropping the truck off at a friends house we drove on down to the venue. The blue of Jack Rabbit looked sad against the dark sky as fans sat in their vehicles waiting for the rain to let up. After a while a few brave souls began lining up under a cluster of umbrellas, only to occasionally dash back to their cars for shelter. As VIP early entry time approached the rain began to let up and more fans joined the line.

We all know the chaos and irritations that can happen at Kpop events . It doesn’t seem to matter whether it is at a large or small venue, it still seems to be the norm. Often this could be alleviated by keeping the fans informed. Well Jack Rabbit performed admirably. Just when I was asking people in line if it was VIP or everyone the event staff came out and directed VIPs to a line on one side of the building and general admission to the other. When it became apparent that the doors were not going to open on time, staff came down the line to explain that the severe weather had delayed the performers. They assured us they were on their way and that as soon as possible after the soundcheck the doors would open.

Just as the final rays of the setting sun gave us a rainbow behind the venue building Mad Clown, San E, Sobae and the other artists showed up. Due to the delay we were given free souvenir wristbands which was a nice touch.

Once we were allowed inside we waited for our meet and greet. Rather than being rushed because of the delay, the artists made sure to have a few words with each of the fans, as well as signing our free tour posters. We then got to have our photo taken. We also got hugs. I forgot to pick up my poster and Sobae was so sweet and followed me to make sure I got it. She was also incredibly beautiful and as I was to find out as the evening progressed, extremely talented.

We got drinks and chose to sit at one of the tables. Much as I wanted to be front and center I’ve been under the weather lately so decided to make an adult decision and a find a place to sit. The venue had a nice wide stage. This allowed for a lot of front row space, so many fans got really up close to the the artists and got a lot of interaction with them. My view wasn’t great, but I could still hear the music and feel the energy. Like Mad Clown sings in Butterfly “don’t ask me why I’m at a club, I’m here to listen to music.” He might just be my new spirit animal.

Every now and then I’d move a little closer so I could be in the thick of the action, and the pulsing high octane energy.

If you talk to the fans who were there they each might have a favorite part, but to be honest it was all fantastic from the, unknown to me, opening act to the local DJ’s with their Kpop Mv’s, to the main artists. The main three San E, Mad Clown, and Sobae kept the crowd bouncing, bopping and cheering all night long. The wonderful DJ Juice  perfectly kept up with them making sure that we got the best musical experience.

Sobae’s beautiful voice was a welcome surprise and she easily sang her parts with class and skill. She also has a truly lovely smile. Even though they are both often thought of as ‘ballard’ rappers San E and Mad Clown worked the crowd up into a frenzy at times. I have to say I fell for Mad Clowns quiet eyes and charmingly quirky smile and found his on stage presence quite appealing. San E was a force to be reckoned with on stage. He paced and bounced from one end to the other engaging fans with his wide smile and powerful charisma all while mesmerizing them with his performance.

Not the usual dressed in black, tattooed rappers who throw the F word around like is is the candy in a pinata, San E and Mad Clown showed that rappers just have to be intrinsically good at what they do. If you have talent and skill people will appreciate that, and all the artists on stage definitely had both. It was a dynamic and addictive show with everyone wanting it to on forever.

I was allowed to go up to the side of the stage with the press for a short while and enjoyed every second. Admittedly I spent more time just enjoying being so close rather than taking photos. You know the whole enjoy the moment philosophy.

Once the last song had been sung and the crowd dispersed we hung around for a while as San E had said he’d like to see me after the show. We were shown into the tiny artists room and I got to speak to everyone for a short while before a group photo and lots of hugs. It was really nice getting so many hugs since I also had a reason to celebrate. Kpopjacketlady.com had had its 2nd anniversary that day. 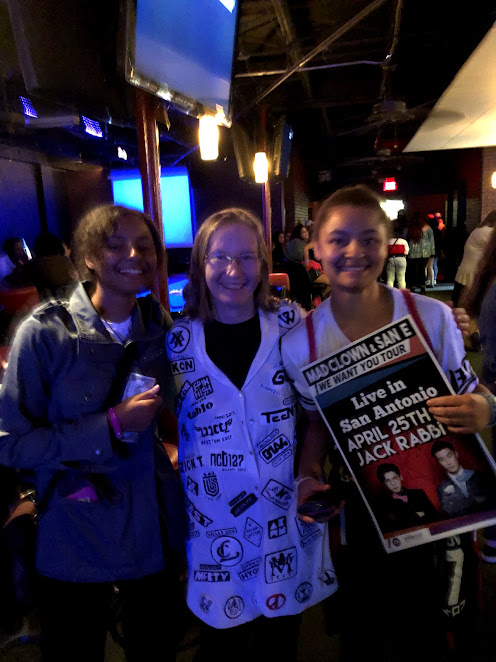 One of the most fun shows in awhile. I was so thrilled the weather hadn’t made us miss such a stellar evening. It was fun to meet up with friends old and new and to be able to share such a fun night with them. A big thank you to Cathy and Rick for keeping me company and making me laugh so much. 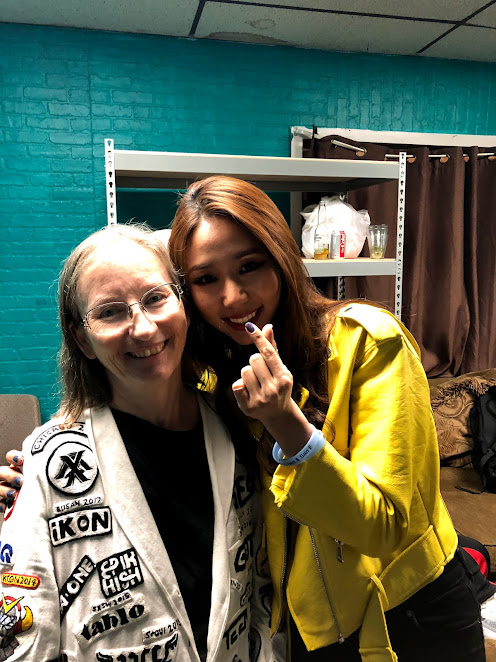 Thank you to everyone who made it such a great experience, and please come back and visit us again. Stay a little while and we’ll show you true Texas hospitality.

A brief shoutout to Jack Rabbit who did a great job making the event go smoothly. The bartenders and staff were friendly and professional. Also having a food truck right outside the front door was pretty sweet.

You can find tour videos on Youtube as well as the artists MVs. San E & Mad Clown.   Sobae.

Please do not copy or use without permission and accreditation. All photo credits to original owners. Myself and Rick & Cathy Silvers. Plus the Artist promotional photo is from their tour website.

NB. I didn’t get the embroidered patches finished in time, so San E and Mad Clown signed the fabric and I’m going to see if I can embroider those to also add to the kpopjacket.