Posted on February 20, 2018 by kpopjacketlady

We all need time off so here’s a quick change from the normal Korea centric posts I usually write. There maybe a slight relevance for some of my readers, particularly in Asia and North America, since Alaska is the closest and probably cheapest place for you to visit if you ever want to see the Aurora Borealis. Most of the foreign tourists we spoke with were from China, although a lot of tourists who visit Alaska are from Japan. 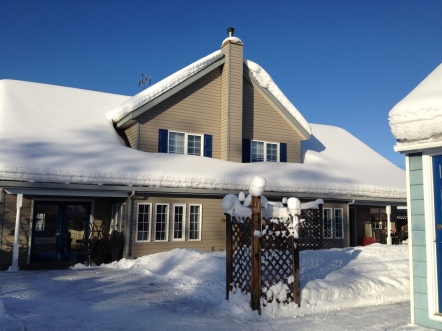 My friends and I flew on Alaska Airlines from San Antonio, through Seattle, and on to Fairbanks, Alaska. We flew the last flight out of Seattle and landed in Fairbanks at 2:30am. In a perfect world we could have seen the aurora as that is usually peak viewing time. But we weren’t so lucky. Fairly exhausted we took a taxi from the airport and  found our keys taped to the front door and staggered up to our rooms to try and get a least a little bit of sleep. We stayed at the Minnie Street Inn which was perfect for us.

We had 2 separate bedrooms with a shared bathroom and then downstairs was a living room, dining area, and kitchen that was open for all the guests to use. (Note, they no longer serve breakfast, so you can make your own, or head to The Diner, about 2 blocks away for breakfast, including reindeer sausage.) 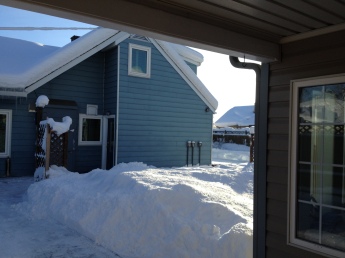 The Minnie Street Inn has multiple buildings with a shared garden area, and deck complete with a grill if you’re adventurous enough to grill in the snow. There’s also a laundry area available for a small fee. We met people from all over and made some good friends with whom we later shared an aurora hunting evening. And split the cost which was good for all of us. 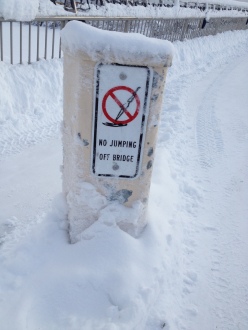 Maybe one of the best things about the Minnie Street Inn is that you can easily walk to the old center of town. So on our first day we took the pleasant stroll through a quiet neighborhood and then across the William R Wood Memorial footbridge to Griffin Park which winds along the edge of the Chena River. 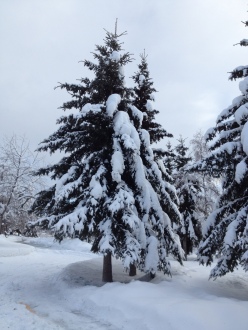 At this point if you go straight you are in downtown Fairbanks. However we decided to take the scenic route through the park towards the Cultural and Visitors center. 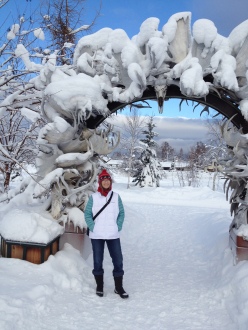 First we came across a WWII memorial and then a moose antler arch.

There was an ice sculpture in front of the Cultural and Visitors center as well as a scenic cabin with outhouse. Once we’d finished being silly, I somehow fell pretty much face down in the snow, we went and gathered some tourist information and watched a free movie about the aurora inside the center. 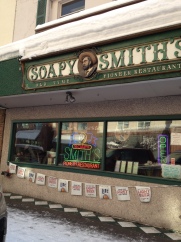 Hunger hit and we left the visitors center without exploring all the exhibits. We strolled into downtown and found Soapy Smith’s Pioneer Restaurant which had been recommended to us. Owned by a third generation Alaskan it is full of old memorabilia and was pretty cool.

We had a phenomenal waiter who helped us choose some Alaskan beers. He also recommended the crab burger, and the halibut and fries. I was so hungry there isn’t a photograph of the meal. Both the burger and the fish and chips were good, but I have to admit I enjoyed the strawberry and rhubarb pie the most.

We headed back to our place to take a nap before our night time excursion out to see the aurora. We chose a tour that would come and pick us up and take us out to Cleary Summit to a viewing lodge. ( No way we were going to drive ourselves at night in Alaska with two feet of snow on the ground.) Unfortunately we saw nothing that night and returned home after about 3 1/2 hours of waiting/watching. The information we all see on the internet says there’s a 90% chance of seeing the aurora if you stay at least 3 days, so we made plans for the next night.

Next morning we slept in, and then headed out to The Diner for a hearty breakfast, including reindeer sausage. Then back to the Inn to wait to be picked up for what would turn out to be the highlight of our trip. 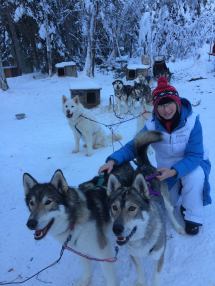 We went dog sledding, and somehow lucked into booking with what has to be the best choice in Fairbanks, Boreal Journeys. Run by a young couple who live off grid and know all the ins and outs of living in the wilderness we had an amazing time. Although they usually only take two people at a time they customized an afternoon for us that all three of us would enjoy. 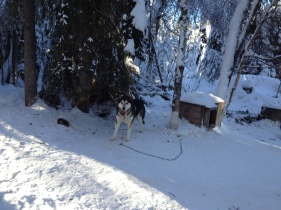 The pre arranged pickup was prompt, and our driver a great font of local knowledge. The ride through the sparkling snow covered countryside was breathtaking. Upon arrival Jenna and one of the dogs came to greet us and lead us along the the trail to their cabin. The dogs heard us and began to get excited. 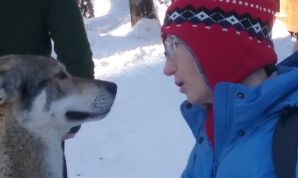 Jenna and David introduced us to the dogs, told us their names and explained a little about their lives. She also happily answered all our questions. The dogs were very happy to greet us, and to get a little bit of extra loving. Jenna and David keep their ratio of dogs to humans at 5:1 so all the dogs get a lot of attention and some even go in and out of the cabin…until they get too hot and head outside again. 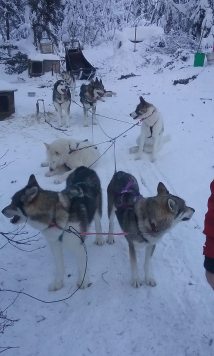 We decided that Carolle and Michael would head out on the first run, while Jenna and I took a short hike along the frozen creek and into the woods. We helped harness the dogs, eight for this run. Carolle rode in the front while Michael stood on the runners on the back sled.

The dogs were really excited and wanted to get going. 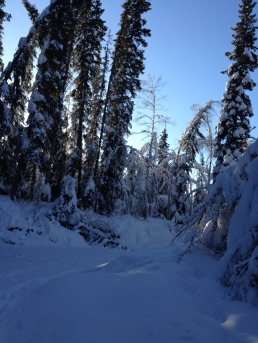 Once they left Jenna and I headed out on our walk. We walked along the creek bed for a ways and saw various animal tracks in the snow. We even saw moose poop, but no moose.

We walked until we came to a trail crossing so we could wait to see Carolle and Michael go past. 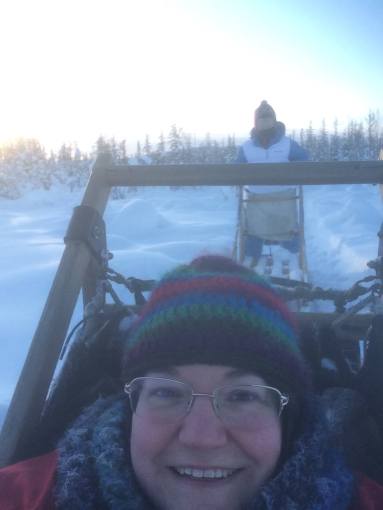 Once we all got back to the cabin the dogs got a snack and time to rest before they headed out again. This trip I got to sit in the front for half the way while Carolle rode the runners and then we switched half way through. Both the riding in the front sled and riding the runners were a lot of fun, going up and down the river banks to cross the creek was like being on a roller coaster.

We spent some downtime after the rides with a drink, and a taste of freshly cooked moose meat which was delicious, before we said our goodbyes to the dogs and headed back to the Inn. It is hard to describe just how much fun we had. It is the memory of this afternoon that would bring me back to Alaska, and I heartily recommend it.

Once we got back to Inn a nap was attempted, and plans made for our evening adventures. Two young ladies staying at the Inn agreed to join us. We rented a Taxi for the evening at an hourly rate which is quite economical if there’s a few people sharing. At 11pm sharp we headed out in search of the northern lights. We were out until almost 4 am and drove many miles with no luck.

One thing about the aurora forecasts on the web is that they tell you what is happening up in the sky, not what you can see from the ground. If there’s fog, mist, rain, snow etc you won’t see the aurora, so in some ways the weather forecast is as important as the aurora one. We did have adventures though. We tried to be heroes and help a mini van that went off the road and into the snow, (we failed, later someone else with shovels etc succeeded) we saw a moose, peed in the snow, and bonded in our failure. But no aurora. 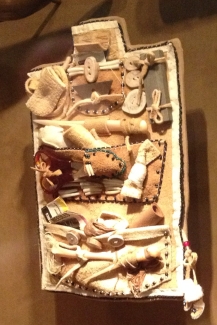 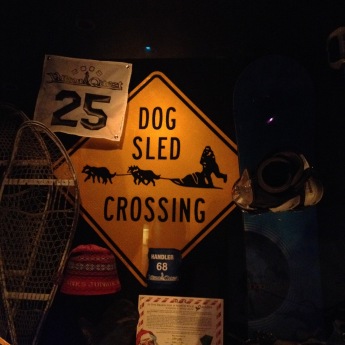 The next day exhausted and despondent we tried to muster and enjoy our last day. We had a great lunch at The Diner, a stroll to the Cultural center where we actually looked through the exhibits, and then I headed back for a nap and to pack, Michael went antique shopping and Carolle explored the Museum at the University. 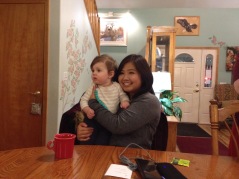 The last evening we hung out with new friends, chatted, laughed and generally had a fun time, all the while trying to decide if we would head out for one more try to see the lights. Common sense and a lousy weather forecast dictated that we leave that night’s adventure to the younger crowd. (We had a 6am flight out.)

For any of you thinking of going to Fairbanks Alaska I would say do it. Even without the lights we had a fun time. The people were friendly, the day time weather was good, and there were unique things to see and do. (Molly and Nicole, our new friends, went ice fishing and caught 3 fish which were then cooked and eaten on the spot.) I would, however suggest maybe stay for 5 nights to ensure a good chance to see the lights. And even if you see them one night they are never the same 2 nights running. To do the dog sledding we took you’ll need to know basic English to understand the instructions, but there are other dog sled places where they are not so much in the wilderness. Many of the Chinese tours we saw were with large tour groups so less adventurous travelers might find that a good option.

I hope some of you travel to Alaska, and have better luck seeing the aurora than we did. If you do let me know in the comments.  Have a great day everyone.

All photo credits to original owners. Photos 1 and 32, plus 2nd video to Jenna at http://www.borealjourneysak.com . The rest to Carolle Ternus, Michael Seminara, and me.

3 Comments on “Kpopjacketlady: Adventures in Alaska, Chasing The Northern Lights.”