Running Man is a Korean variety show that is extremely popular not only in Korea, but around the globe. It is particularly popular in China and the rest of Asia, but with the advent of sites like YouTube, Drama Fever, and Viki, Running Man has fans around the world. To get full versions of the early years you might have to use a service like Drama Fever. China even has its own version, Hurry Up, Brother, which closely follows the idea of the original.

I started watching Running Man six years ago and have watched every episode since then. They just celebrated their 300th show / 6 year anniversary a few days ago. Many congratulations to everyone involved. It is quite an achievement for a Korean variety show to last so long. I believe only Infinite Challenge and  One Night Two Days have lasted longer. Running Man has not only filmed episodes in Korea, but also in Australia, China, Thailand, Indonesia, Vietnam, Taiwan, and the UAE.

I began watching to follow Yoo Jae-Suk and Kim Jong Kook who I had enjoyed in the variety show Family Outing. The first episode was set in Times Square, a huge mega mall located in Yeongdeung po-gu, Seoul. (When we visited Seoul we stayed in an apartment just across from the main entrance to the mall and visited regularly to pick up snacks, or grab something we needed from E Mart.) 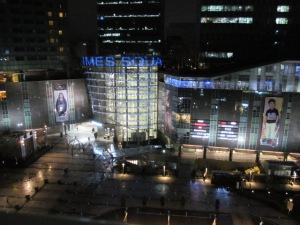 The first episode introduced the members we know now; plus Song Joong Ki, who was a regular on the show for the first 40 or so episodes, Lee Hyori, who was there to counterpoint Yoo Jae Suk and help MC, (they had had a bickering brother/sister type relationship on Family Outing), and a guest Hwang Jung Eum. The first episode had some funny moments, but it was a little chaotic at times as even the members didn’t seem sure of what to do and what roles they should play. The fake laugh track irritated me and I had to get used to the instant repeat of funny moments, something we don’t tend to see on US programs. But the overall concept seemed fun and it had great potential. The shy Lee Kwang Soo in the minivan near the beginning is nothing like the character he is now. Song Joong Ki was so cute and his smile captivating. HaHa had some funny moments and Gary was, well Gary. The clothes hanger race was funny and original and the chicken fight had its funny moments. I liked the idea of using such an original location although I don’t think they used it to its full potential.

Song Ji Hyo was not a member at the very beginning but was a guest for episodes 2-5 before becoming a member in episode six. I can’t imagine the show without her now and really admire her for being the only female with six male members week after week. Lizzy from the group After School was a member for about 10 episodes before she disappeared with no reason given.

The early episodes continued to be a bit uneven, but the cast members began to work out their roles and there were always funny moments, some that made me laugh out loud which is not something I do very often. The highlights of many of these early episodes were the locations, the guests, and the name tag battles. Some of the guests were big names in Kpop, acting, and sports. Jung Young Hwa of CN Blue and Nichkhun of 2PM have appeared on multiple episodes and always been great, even challenging Kim Jong Kook on a physical level as well doing well in the challenges. Kim Woo Bin and Kim Kwang Kye, both actors have appeared multiple times and sports greats like Ryu Hyun Jin (baseball), Cho Sung Hoon (MMA), and Park Ji Sung (soccer) have also appeared on the show.

The show moved away from some of the earlier themes like being locked in a building, but has kept most of the popular things. The name tag game has become iconic and many guests are disappointed if they don’t get to play it during their appearance. Producers and staff have changed over time and the equipment and video quality seem to have improved over the years. I’m not sure I like the direction the latest producer is taking, but I’m willing to give him some time to settle into the position. Some of the recent games have been a bit confusing and not really all that much fun, and I worry some of the cast are becoming almost caricatures of themselves. It must be very tiring for the cast to continue acting out their personas every week when they are not really like that in real life. Still with all the ups and downs Running Man is still my favorite K-variety show. 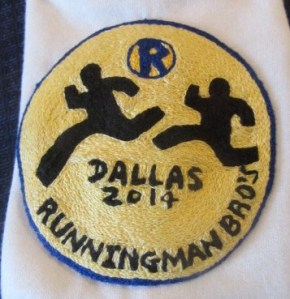 I met, very briefly, both Kim Jong Kook and HaHa at the Running Bros concert in Dallas and was impressed at how they really seemed to be nice people. I hope one day to meet the rest of the cast members, and my dream would be for a Running Man episode to be filmed here in Texas. Think of all the fun things they could do here, from cowboys and rodeos, to sports, NASA, beaches, theme parks, and great food like barbecue, steak, tacos etc.

The second part of the 300th celebration episode doesn’t air for me until next week so part 2 will be posted shortly, and I’ll include instructions on how to make your own ttakji/ddakji. 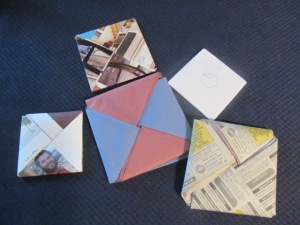 Until then, let’s keep on Running. Have a great day.