My Attempt At Making A Hanbok: Part One.

The Korea Hanbok is one of the most beautiful traditional clothing styles found anywhere in the world. Although no longer everyday dress for most Koreans they can still be seen being worn by Koreans on many special occasions such as weddings and national holidays. They are also commonly seen at many tourist sights. 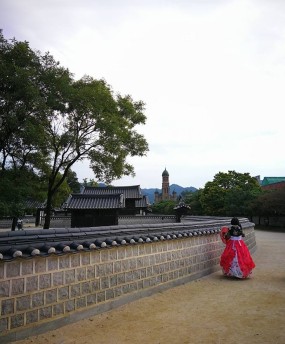 Hanbok rental shops have cropped up in the past decade near palaces, temples, hanok villages and other historic sights. Not only tourists rent Hanbok, young Koreans sometimes do it for a ‘couple’ date, and yet others just do it for fun and instagram photographs.

My daughter and I even dressed up at the airport while we were waiting for our flight. 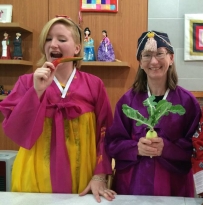 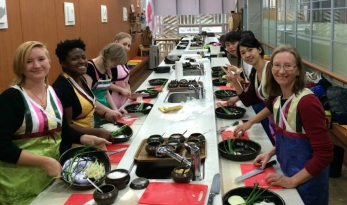 And for our kimchi making class.

These rental and ‘costume’ hanboks vary in quality, style and authenticity. Don’t get me wrong, they are often very beautiful and stylish and provide many people with an opportunity they otherwise wouldn’t have, but they aren’t totally the real deal. Real hanboks are expensive as can be seen when you search online. If I was considering one for a wedding, or other special occasion, I might pay that kind of price, but I just want to have one for conventions and to wear at my historical recreation groups events.

With those constraints I’ve been looking at historic hanbok design. My historical re creation group stops with the year 1600 CE with everything needing to date before then. However it still permit modern things such as allowing people to wear glasses etc. so it is not as strict as many reenactment groups. Still many people try and recreate the costumes, accessories, food, crafts etc as accurately as possible.

(Photo of my daughter wearing an Elizabethan gown made by our friend, Alex.)

The hanbok is said to have been around for about 1,600 years and tomb paintings from Goguryeo show some of the earlier styles. The Goguryeo Kingdom was around from about 37 BCE – 668 CE. These early images show a chima, or pleated ‘skirt’ tied above the breasts, a jeogori or jacket long enough to cover the hips, and wide sleeves. An underdress or pants might be under the skirt.

( This is “a recreation of clothing from the Goguryeo Kingdom (37 B.C. to 668 A.D.) based on a 5th century mural from Susanri Tomb in Pyongan Province in North Korea”. [ARUMJIGI CULTURE KEEPERS FOUNDATION, JOONGANG ILBO]) 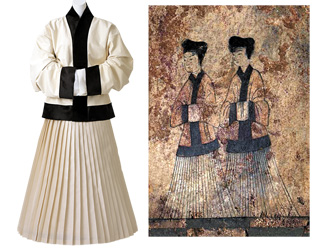 The Goryeo Kingdom (918-1392 CE) was somewhat influenced by the Mongols, and Mongol princesses even married into the Korean royal family. At that time the chima was usually gathered not pleated, the jeogori became shorter, the sleeves narrower, and the otgoreum appeared. The otgoreum is the bow tied on the front of the jeogori which has become integral to the design of all hanboks since then.

The Joseon Dynasty (1392- 1910) covers such a long period of time that changes gradually took place throughout those years with the jeogori becoming even shorter. So much so that an extra band of fabric had to be added over the skirt and under the jeogori to preserve a woman’s modesty. The jeogori also became more form fitting.

For myself I’m thinking of perhaps making a sokchima (petticoat), a chima, (skirt) and perhaps two jeogori, starting with the historically older one with the longer jacket. Now that I’ve decided on that I need to think about materials. Hanbok was traditional made from sambe (hemp), mosi (ramie), cotton, or silk, depending on class and the season. People often had summer and winter hanboks made from different fabric. Living in South Texas I need to take extreme heat into consideration, so I think I’ll use linen, an easily accessible material similar to hemp, that is relatively cheap and helps keep the wearer cool. If I could afford real Korean mosi (ramie) that would have been my first choice, but most of what is sold as ramie in the US isn’t really proper mosi. Just as a lot of fabric sold as linen is actually a linen blend. Fortunately I was able to buy some really nice linen a few years ago. The photo shows my linen stash. Not sure which colors to choose just yet though. 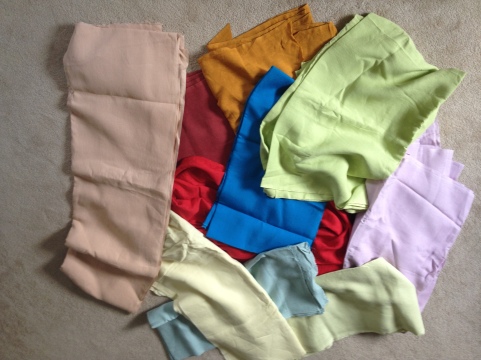 Koreans were once known as the “white clad people” and you can understand why when you look at old paintings and photographs, but this was probably because of their white cotton summer outfits, particularly for the working classes.

Even the poor sometimes wore colored clothes although not the vibrant hues available to the wealthy. The royals and the royal court obviously wore the most splendid clothes made from silk in the winter and mosi in the summer. The colors were intense and deep with gold and red being particularly favored, as were other dark colors. (Dark colors require more dye and are therefore more expensive. The same is also true of really vibrant colors.) If they could afford it mature women tended towards dark greens and reds, while young girls had the widest variety of color choices. The poor were likely to wear pale pink, light green, grey and so forth as lightly dyed cloth was cheaper to make.

The more wealthy you were the more likely you were to have more cloth used for your clothes, and the more accessories and embellishments you would have. Embroidered clothes obviously cost more, and if they were embroidered with gold thread then you were exceedingly wealthy. Needless to say I can’t afford the time or the money to make an outfit like that. I think I’ll aim for someone in the middle, not a slave and not wealthy.

I began making the sokchima, (petticoat) before deciding to keep a record of the process so I don’t have photographs from the beginning. Basically I used a piece of linen 2 1/2 times the measurement around my chest just above my bust and under my armpits. Traditionally the sokchima and chima were held up by a tie, more recently straps or even a bodice have been used to make the dressing process easier and the outfit more comfortable. I then tore it along the weave (often easier than trying to cut a straight line). The next step was to measure from where it would sit above my bust to the floor plus about 3” longer than the length I needed. I ended up with a rectangle of cloth.

I hand hemmed one long side and the two short sides. Since I make my outfits to be used multiple times, they must all be machine washable. This means I can’t leave any rough edges or the fabric will unravel. I do have a sewing machine, but no serger, so I do a fair bit of the sewing the old fashioned way…by hand. I then pleated the last long side which is where I’ll attach a band to tie it. 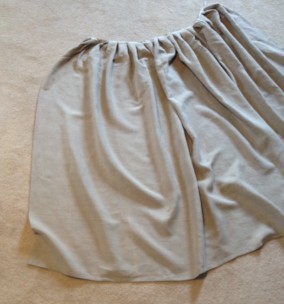 This is where I stopped for now, and where the adventure begins. I have looked at some of the patterns online, but nearly all of them concentrate on making a modern hanbok.  What I need to do now is some experimenting with the band, particularly since I’m using pleating not gathering. Well at least for now I am. If you look at the recreation of the white 5th century dress it almost looks like the chima might be tied lower than above the bust. This is one of the reasons I’m making the sokchima first. This way I can work out methods and fix mistakes before I begin on the rest of the outfit. It is also why I chose a drab color as I don’t want to mess up with one of the pretty colors.

You may also enjoy Ramie: “Wings Of A Dragonfly,”   Hanji: The Paper Of Korea, and  Korea’s Greatest Hero.

6 Comments on “My Attempt At Making A Hanbok: Part One.”