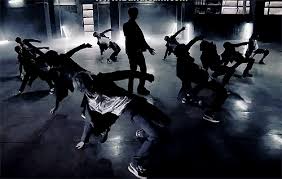 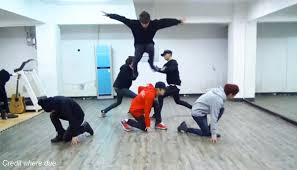 Those who already watch Kpop know just how much amazing choreography is showcased by the whole genre, but for those who haven’t thought much past the derisive image that the term ‘boy group’ or ‘girl group’ conjures up, you’re in for a pleasant surprise. Not only are many routines choreographed by some of the best choreographers in the world, think Parris Goebel, Keone Madrid, or Nappytabs, but the groups that perform these routines contain some outstanding dancers. In fact there are so many to choose from I would have to write multiple posts to be able to cover them all.

The dance that springs to mind first for most people when Kpop is mentioned is probably the ‘horse riding dance’ from Psy’s megahit, Gangnam Style which is in the billions of views on Youtube. It was created by Lee Ju Sun who says he was paid ‘a miniscule amount’ for the choreography. He goes on to say that later he did receive a bonus from Psy, but I’m not sure if he feels it was fair considering that the dance had such a large part of making the MV a worldwide sensation. He also choreographed Gentleman and is now trying to become a singer himself. 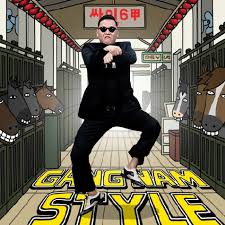 Dance choreography does fall under copyright laws and the creators should receive credit and compensation, but these laws vary in rigor and enforcement from country to country. Well established names in the business tend to do ok, but young up and comers have a harder time being paid a fair amount for their work. This situation has seen some improvement in the world of Kpop since the early years, and shows such as Hit the Stage that are focusing on the importance of dance in the Kpop world should help even more.

Dance is an integral part of any Kpop MV or performance and many groups can be recognised by their iconic dance moves. Their popular moves often have names and occasionally fans are asked to provide those names for them. Dance practice videos which showcase the choreography without the distractions of sets, props, and elaborate costumes are becoming increasingly popular on Youtube with some reaching into the millions of views.

Even a first run through list would contain well over 25 choreographers so for today I’ll mention some of my favorite dances and speak a little about the choreographer for each.

Right now I’m still enjoying Fire by BTS, with the choreography by Keone Madrid. What is truly amazing is that BTS learnt this routine by video! Which leads me to the point that in many cases there is an overall choreographer credited, but that doesn’t mean that assistants, group members, and dancers don’t often have input into the overall finished product. Just like Kpop rappers are known for collaborating on their lyrics so do the dancers in the group have ideas so what will work for their particular group. Keone is an American working out of San Diego. CA. where he lives and works with his wife, Madrid, another well known dancer and choreographer. Together they have appeared on So You Think You Can Dance and have their own Youtube channel, which lists some of the other Kpop choreography they’ve worked on including Taeyang’s Just a Feeling, 2PM’s My House, Got7’s Just Right and A, and many more.  I think Keone has a very watchable style, somehow smooth and lyrical and yet with plenty of hard hitting fast moves that pack a visual punch. In the future I hope to see him actually in Korea working with BTS and other Kpop groups. 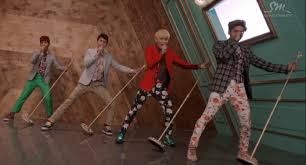 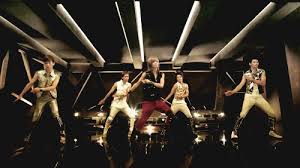 I was at one of the Fly In the USA concerts for SHINee recently and it reminded me of how great some of their dances are. One of my favorites is Lucifer, choreographed by Rino Nakasone and Shim Jae Won. Large entertainment groups like SM Entertainment often have access to a larger pool of choreographers than some of the smaller agencies, and more collaborations happen by pairing an in house choreographer with an outside talent brought in for a particular song. In this case Shim Jae Won works at SM and Rino is from Japan. They have also worked together on the TVXQ song Keep Your Head Down, a fairly well choreographed piece if you can get past the costumes. Rino first worked for SM back in 2008 on SHINee’s debut song Replay, and has choreographed pieces for BoA and Girl’s Generation among others. Shim Jae Won has worked with SM groups for years and knows their strengths and weaknesses allowing him to create dances that showcase their talents. 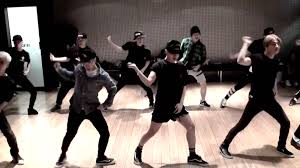 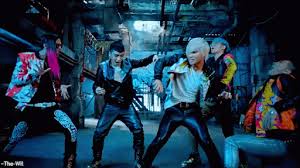 BigBang is known for many things, but they’re not usually at the top of anyone’s list of best dancing groups, although Taeyang is individually recognised as being one of Kpop’s most talented dancers. But that doesn’t mean that they don’t have some good choreography and dances, because they do. As noted above, a good choreographer knows how to showcase the talents of each member and how to tie those talents into the song and the music. YG Entertainment has their own talented choreographer in Lee Jae Wook, but they are quick to use outside talent, such as Aimee Lee Lucas, Shaun Evaristo, and Parris Goebel.

I enjoyed Bang, Bang, Bang, choreographed by Parris Goebel, who along with her different crews, has won a total of 16 medals at the World Hip Hop Dance Championships. Her choreography is innovative and visually interesting with moves that while looking easy are not. Her interpretation of the music is spot on too. She calls her style polyswagg and says it is based on “hearing, breathing, and living the music.” Parris also worked with Taeyang on Ringa Linga a song which received much praise from within the global Hip Hop community. She has worked with other artists from YG and has said she is looking forward to future collaborations. She is perhaps best known for her work with Justin Bieber, with her collaborations with him having reached over 3 billion views on Youtube. Parris is from New Zealand, of Samoan descent, and has worked all over the world. I look forward to her sharing her skills, and style, with more YG artists. She has an amazing talent.

I would like to finish up today by stating the obvious, that while Kpop groups are carrying out their amazing and complex choreography they are also singing. I have seen enough groups live to know that lip syncing on stage hardly, if ever, happens nowadays. (MV’s are another story.) So kudos to those idols who perform smoothly such challenging and intricate choreography and a very special thank you to the often overlooked people who created it. My hope for the future is that more people will appreciate your contributions and that you have every success in the future.